In the National Park of Aconcagua there are some good acclimatization peaks which are used as a warm-up for the main target - Aconcagua.
On the east side Ameghino, Rico and Ibañez are the best options before attempting the "Polish Side".
On the western side where you find The Normal Route of Aconcagua you find Bonete. The peak, possibly together with Manso, is the most common acclimatization target on this side of the "Big One".

The altitude gain of 650 meters from Plaza de Mulas is perfect for getting ready for higher goals. You reach the peak by walking easy and well-travelled paths from Aconcagua's Base Camp and the peak can easily be summited in a leasurly manner in a day.
The views from Bonete's summit is great in all directions. To the west you look down into the Cuevas Valley and you get a good overview idea of how the normal route on Aconcagua looks like.

Some hikers have described the scree slopes on Bonete as a bit scary and the summit ridge airy and exposed. For any "normal" climber who has Aconcagua in mind, there should be no problems whatsoever and if you only look at gradient and the difficulty of the slopes - Bonete is slightly harder than its 2000m higher neighbor.
See Bonete as a little test.
When you feel fine on its summit, you're ready to move upwards on Aconcagua.

It got its first ascent in 1950.
The peak has sometimes been mixed up with Bonete Chico, the much higher peak on the Puna and the obscure Bonete Grande, also located hundreds of km north of Bonete.

The peak is easy to recognize. Looking past Restaurant 4372 from Plaza de Mulas you see a ridge with sharp tooth of a summit in the end of the valley - Bonete.

To the area
There are two main entry points to the area: Santiago de Chile-Chile and Buenos Aries-Argentina.
Regardless of which of these you choose, you have to go to Mendoza (Argentina) and apply for a permit for Aconcagua National Park where Bonete is situated. A majority of visitors are joining commercial expeditions and if that is your choice, all the travel to the peak will be taken care of.
If you want to take care of the travel arrangements by yourself, here are some alternatives.
If you're on a commercial expedition with a set program, Bonete may not be included in the plan.


To the peak - in civilization
1). Buy all you need for the expedition in Mendoza and pay the permit fee. (See below for details).
2). Go to the main bus station in Mendoza and buy a ticket to Potrerillos if you want to acclimatize in the Cordon del Plata area. See map for an overview.
3). Regardless if you go to Cordon del Plata first, Uspallata is a good place to stay if you want to break up the journey in two parts or rest a bit after your acclimatization trip.
4). Continue by bus to Puente del Inca, from where you start walking towards the peak.

To the peak - the walk in

Walk from Puente del Inca to Horcones, the park gate. This stretch is 4 km and is on very broad walking paths. Most people has transport arranged for this quite boring stretch. Register at the park gate.
An easy walk in a sometimes quite narrow canyon takes you to Confluencia. Walking times varies a lot, but count on anything from two to five hours, depending on how much you carry and how well acclimatized you’re. Confluencia is a good place to spend the night and you have to register at the ranger’s hut here.
The water in Confluencia has a high content of magnesium and minor stomach upsets are common.

The next step of the walk is to Plaza de Mulas, which is a five to ten hours walk away. Down into a river valley to start with. Be sure you walk to the left when you see the river, otherwise you may end up in Plaza Francia, the base camp at Aconcagua’s south face. There's a primitive bridge over the river. After the steep uphill from the river valley, you’ll walk in a wide valley for a couple of hours. Water is accessible most of the way, but it’s smart to fill up when you have the chance. This water can be full of sand and sediment. There are nice views of Piramidal and De Los Dedos on the way.
The last part up to Plaza de Mulas is steeper and you better watch out for arrogant mulateros on their mulas the sometimes narrow paths. Check in at the gate and find yourself a camp spot. On your left, in the end of the valley you'll see Bonete. 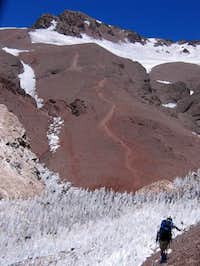 This image shows the lower half of the route well

A permit for entering the Aconcagua National Park is necessary. The only place to obtain it is in Mendoza. The Permit office is located on one of Mendoza's main streets; San Martin. Ask for: Subsecretaria De Turismo or San Martín 1143. The permit office is not in the park anymore!

Note that the prices above are for foreigners. Argentinean citizens pay half of what’s stated above.
Validity of the climbing permits is 20 days from the day of entry to the park.

The permit has to be paid in cash over the counter in the permit office and is ready in ten minutes. A thing to think about is to have the whole amount of cash in one currency. I showed up with about 60% in Pesos and the rest in USD. It did not work and I had to rush off and change. There are money exchange bureaus nearby. Casa de Cambio, in Spanish.

The following is to be found on the back of your climbing permit:

You will have to pay a U$S 200 fine if you:
* Throw garbage, forget or loose the numbered bags in the high camps or during your expedition.
* Gather or burn wood in the park.
* Carve insriptions in the stones.

You will have to pay the equivalent of a 2nd permit or an ascent permit if you:
* Go beyond the limits of the length if the stay allowed in the permit or go higher than 4300 mts with short trekking (3 days), long trekking (7 days).

Bonete as seen from base camp

When checking in to the national park in Horcones, the ranger in charge will supply you with a numbered garbage bag. You're supposed to put all the litter in this bag and return it at the gate when leaving the park.

When arriving in Plaza de Mulas or Plaza Argentina an official will register you and hand over a numbered "shit-bag".
This bag will be your companion all the time on the higher reaches of Aconcagua and if you loose it you have to pay a $200 fine.
You're supposed to use the bag as the only alternative for a toilet and if you're doing your business in nature and are spotted by the guards there is a $100 fine.
The plastic of the bag is not that thick and is not to be trusted. Double or triple pack it in order to avoid quite disgusting leakage in your back pack.

The whole situation can get quite absurd... A saw one team of climbers heading down at a break-neck speed, "so it was still frozen when arriving at base camp".

If not part of an organized expedition, you have to "be contracted to a toilet service" at BC. We were asking around a bit and some big organizers told us the price was US$100, some smaller US$5/day or US$10 for the whole stay. If you used the toilet services between 20:00 and 08:00 you did not have to pay anything in some of the places. For those on an extremely low budget an alternative was to camp at the restaurant and use the toilets there.

As all this were new to everyone, there was a lot of confusion. Some zealots were very strict about the rules and some didn´t care at all using a free spot to squat themselves when nature called.

The most common time to be in the area is from the beginning of December to mid March. This period has the highest temperatures and also the most stabile weather. Another factor to consider is how you like to be at one of the world’s most busy mountains at peak season. At the beginning and in the end of the above mentioned period there are less people around.

There are nowadays some companies that arrange winter trips to Aconcagua and the peaks in the park.

When entering the national park you have to camp in the official camp grounds.
These are: Confluencia, Plaza de Mulas, Plaza Argentina and Plaza Francia.
When you have arrived at Plaza de Mulas you are more free to camp wherever you want and if in doubt; ask an official. 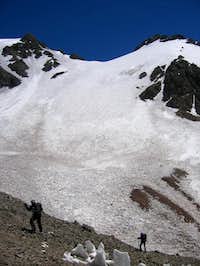 On the way up and huge penitentes fields

There are websites monitoring the weather for the area, but as Bonete isn’t a peak you reach in a day, they can only give you a general idea about temperatures etc. Much better is to talk to the rangers and expedition organizers in Plaza de Mulas. They all have fresh information from various sources and usually also lots of experience about weather patterns in the area. When anyone points out there is a Viento Blanco (White Wind) coming up, be attentive. These are the infamous storms that plague the Andes. A certain sign a Viento Blanco is approaching is a veil-like cloud over the summit of Aconcagua. The arrival of the storm, with fast dropping temperatures can be very swift, but 10-12 hours after the first signs is the norm.

The summit ridge on Bonete can be very windy. Be careful as the sudden gusts can be dangerous on the quite narrow path to the summit.

Website about the weather in the area - Mendoza weather

[img:20477:alignleft:small:Hotel 4372 en route to Bonete]
If you're on a tight budget or/and want basic accomodation in Mendoza, Hostel Independencia is a good alternative. It's conveniently located at the main park in the center of the city. The permit office for Aconcagua is a five minute walk away and so are the gear shops, restaurants etc.
The hostel is also a good source of info and there's a mountaineering agency operating in the hostel's premises.
This company can also provide rides to Cordon del Plata or Aconcagua, clean white gas and other useful things and services for a mountaineer.
They also organize whole packages for Aconcagua.
In early 2006 the price for a dorm was 20 Argentinian Pesos and a double went for 50.
1USD = 3ARG Pesos

There's one really good mountaineering shop in Mendoza.
Orviz is located on Juan B Justo, a little bit away from the main center.
See map.
The shop has all you can possibly need for any type of mountaineering.
Lots of gear for rent and sale.
Highly recommended.

There are a few more shops on Sarmiento, Las Heras and Suipacha in central Mendoza.
El Refugio is a good one.

Meridies make excellent maps of the more popular areas of Argentina. Their map can be bought in the mountaineering shops, hostels and books shops.

For some more general info about the area:
Aconcagua - Summit of South America is one book that has gotten good reviews.
Aconcagua - A climbing Guide is the classic on the topic.