I added this mountain back in early 2000. Unfortunately the route beyond Casa Piedra up to the Vacas glacier is now closed. So it will be difficult to approach this peak from the provence of Mendoza.

La Mano seen from the Polish traverse on Aconcagua
This is another mountain just north of Aconcagua that is rarely climbed. This is a very striking peak that resembles Alpamayo in shape. Due to its location this 5,500 metre peak can pose logistic problems. The approach would be the same as doing the Polish glacier on Aconcagua but instead of turning left up the Relinchos you would keep going all the way up to the end Vacas valley till you reach the Vacas glacier. Here you would have to find a route up through the glacier or literally find another way through Porto del Tigre or Indio Pass. Once above and on top the glacier. You will see the peak completely from the southeast.

from Corax Date: Feb 05, 2005 4:23 PM
According to a guide in the Aconcagua area, La Mano has only been climbed 6 times. An additional disputed 7'th ascent claim has been made. The peak is by its easiest route a TD, also according to the same guide.

From FabienenCordoba July 2008
Central couloir climbed in 2008, AD+!
Two argentine climbers went up the Canal Central on La Mano and the information is available here (in Spanish):. It seems the canal is <50° with some 4/4+ (French rock grades) at the exit. That would be AD+... It is really unfortunate that the access to the area through the alto rio Vacas is closed now. 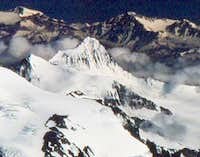 La Mano
Fly to either Santiago (Chile) then Mendoza (Argentina). Or Buenos Aires then Mendoza. Take the bus to Penetentes. The entrance to the National Park is at the Vacas Valley near Penetentes (For the Polish Glacier, Polish Traverse and Vacas routes on Aconcagua). You would continue on up the Vacas valley to access this peak. Special permission may be needed. You would get the necessary info and permission at the Aconcagua Permit office.

You must go to Mendoza Argentina in person to get your climbing permit.

An issue if you go through customs at Santiago airport. There is a good chance that you will have all meat and dairy products from your expedition food confiscated upon entering Chile. Stay in transit and take a short (45 min) flight on Lan Chile or Aerolineas Argentinas to Mendoza, Argentina. This will allow you to keep your food, get your permits, possibly see Aconcagua from the air as they fly close to it at times, and save the 100$ U.S. tax Chile imposes on Americans. 45$ for Canadians and other nationalities.

If you are entering Chile by bus this will not apply.

Possible food issue. Ourclimbers had their bags searched in Mendoza Argentina for certain food items. While normally climbers are treated seperately in this respects, as the foreign currency is valued we are not hassled. They conficated some food items such as peanuts and items that had been repacked not in the original packaging. Among the items taken were believe it or not..gummy bears. We think the staff was hungry. I packed all my food in 3-day packs in seperate stuff sacks labled, base camp, camp one, and camp two. These were packed at the bottom of my bag under everything and looked like a hassle to get to and open. Thus the customs were reluctant to get that deep in the bottom of my bag. The people that were searched had packed their food in clear plastic making the customs agent job too easy. So pack your food accordingly to avoid any unnecessary hassles.

The Argentine Peso was devalued several years ago between 50-60%. The US dollar is widely accepted everywhere, rates of exchange as of 16,01,06 is 3 pesos for each USD.
A steak dinner with wine can cost $6.00 USD. Check out and compare the rate at the airport, your hotel and the various Cambios on San Martin. They are all about the same. See if your hotel will give you a better room rate depending on what currency you will be paying in. Some hotels and stores offer better rates if you pay in cash as opposed to using credit cards. When changing money in most cases you will be asked for your passport so keep it handy. There is a lot of suspision of counterfit bills especially 100 US. Try to bring down bills that are as new as possible. Older scruffy ones can and will be rejected.

Unfortunately the access to the area through the alto rio Vacas is closed now.

Should it reopen the information below may apply.

For entering ACONCAGUA PROVINCIAL PARK, you have obtain a permit. I would suspect that climbing La Mano would cost the same as if you were doing Aconcagua. This is something that you would have to discuss with the Rangers at the permit office. Due to its location near the border with Chile and the fact that it is off the beaten track expecting a rescue may be difficult.
The form-filling has to be carried out personally.

Permits 09/09/05 information gathered from Rudy Parras web site
To enter ACONCAGUA PROVINCIAL PARK, you have obtain a permit.
You have to fill out the forms personally. Permits are sold EXCLUSIVELY at
SUBSECRETARÍA DE TURISMO på San Martín 1143. Close to Plaza Independencia. Most cabs know where this is.

From rnm1 A change this year is that when you apply for your permit in mendoza you must get a ´banking slip´ from the park office, then go to a bank to pay your permit fee. the bank will stamp this slip & then you return to the park office again to get your ´climbing permit´. the whole process takes a couple of hours now, probably a lot more with high season line ups.
Note the Permit costs are much higher than what they were back in 2005. Check on the Aconcagua Page for current rates.
HIGH SEASON: From 15th December to 31st January :

I just stumbled onto a strange glitch which corrupted the location of numerous pages and listed them all at the same point in southern AZ, USA. Please fix the coordinates of this page and I'll be happy to remove my "needs updates" vote. Thanks!

Hi Ive got it fairly close to where it is. Finally figured it out. (minus sign makes a big difference) At least its now not in the States. (•: