Caldera Blanca is an extinct volcano in the north-west of the Canary Island of Lanzarote. Far from being the highest of the many volcanoes of the island, Caldera Blanca's is certainly the widest by far. Measuring 1.15km in diameter it is perfectly circular with high walls all around - very rare for craters this size. Its highest point is located to the south-west of the caldera, the lowest one is to the north-east. This provides us with a little lesson about the formation of such craters. During the eruption north-eastern winds must have prevailed (the most common climate pattern even today). Most of the times these winds were fierce (also encountered today) but for quite a while a lull must have allowed the build-up of the northern walls.

The name Caldera Blanca - White Crater - already indicates that it is not of recent origin. Created during the end of the second phase of volcanic activity on the island - between 3000 and 5000 years ago - Its rocks have already bleached into some sort of dirty beige. Caldera Blanca only appears white in its surroundings, the sea of lava which was produced during the Timanfaya eruptions of 1730 - 1736).

Indeed, Caldera Blanca with its lower neighbours La Caldereta (324m) and Risco Quebrado (312) forms a so-called "Islote", an island amonge the lava sea. The LLava streams couldn't reach up as high and on the lee side of the three volcanoes small patches of "old country" stretch towards the sea. Even today these patches are used by the farmers of the neighbouring village of Mancha Blanca for the typical Lanzarotenian dry cultures of wine, figs or onions. The crater of Caldera Blanca itself is very popular among the goat herders of the island since it can easily be supervised.

Caldera Blanca is one of the few volcanoes in the greater area of the Parque Nacional de Timanfaya and Parque Natural de los Volcanes which can and may be climbed. Consequently the 3 - 4h round trip (also around the crater) is one of the popular hiking routes of the island. The Proximity of the Montañas del Fuego ensures good views of the volcanic moonscape. But don't despair - Lanzarote tourists prefer the beaches ...

The best trailhead for Caldera Blanca is west of the village of Mancha Blanca. The best itinerary (not the shortest but most impressive one) is as follows:

Caldera Blanca is located in the Parque Natural de los Volcanes. For locals, farming is allowed in the park but all construction or quarrying activities are restricted to some very few areas. It took flora and founa hundreds of years to conquer the volcanic cones so please leave everything in its place. 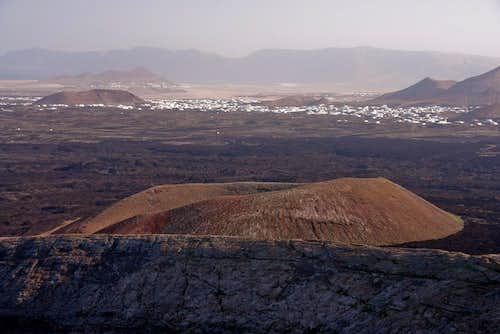 Looking from the crater rim towards Tinajo