With 605m height Volcan de la Corona is one of the highest volcanoes on Lanzarote, the northern- and easternmost island of the Islas Canarias. It dominates the northern part of the island in more than one way. From wherever you approach, your eyes will be drawn to this perfectly shaped volcano cone.

About 5000 years ago, when Volcan de la Corona erupted together with its four neighbours La Quemada de Maguez, Los Helechos, La Cerca and La Quemada de Orzola things were utterly different. At that time only the long cliff of Risco de Famara existed, itself a small, long stretched island 90km off the coast of Africa. The four volcanoes erupted along a rift in the ground, perfectly aligned along a straight line running from the south-east to the north-west. Together (but mostly Volcan de la Corona) they emitted so much lava that the surface of the island nearly doubled over the years. Later, more volcanoes erupted further south, finally covering all the space between the Famara Island in the north and the Ajaches Island in the south. Thus, the island of Lanzarote was born.

Volcan de la Corona easily is the highest of the five volcanoes, even in the centre of its crater it reaches an elevation close to the taller ones of its neighbours. Its crater - like for most of the Lanzarotenian volcanoes - is open to the north-west. But unlike any other volcano on the island its rim and interior look still pretty wild. During the long eruption Volcan de la Corona emitted incredible amounts of material. The ashes where blown south-eastward, creating wide plains, which today are used for farming. Its lavas, however, flowed eastward and created what today is called the Malpais de la Corona.

In this huge area even today barely anything grows. Malpais means "bad country" and if you venture inside you soon understand why. The lava is brittle and breaks easily beneath your step and - to make matters worse - the flowing lava created vast tunnel systems, the roofs of which are ready to crumble at any time. These tunnels - or rather two of them - are among the most popular tourist attractions on the island. The late Lanzarotenian artist Cesar Manrique developed Jameos del Agua into a kind of museum near the coast while the many storey Cuevas de los Verdes mostly remain in their natural state. Both are visited daily by many busloads of tourists.

Monte Corona itself remains rather solitary. It can be reached from the hamlet Ye by a path which runs through the vineyards on its northern slopes. The path ends at the northern crater rim, from where some tracks lead into the impressive interior of the crater. Down there you are surrounded by near-vertical walls which shimmer in many reddish colours. Another path leads to a lookout spot on and beyond the eastern rim but ends there.

Climbing the chasm towards the summit is not recommendable. The western outside part of the crater can be climbed but be sure that nobody observes you. Access to this part of the mountain is strictly prohibited, thanks to the statutes of the Parque Natural de la Corona which protects the whole area. After climbing the steep slabs in the west of the crater the final stage takes you along the extremely (i.e. overhanging) exposed ridge to the summit.

The crater up close

Lanzarote has its own airport between the capital Arrecife and one of the main tourist centres, Puerto del Carmen. There are public bus lines but – like on all the islands – they don't run too regularly. If you plan to stay on your own, better take a rental car right at the airport. Volcan de la Corona can be most easily reached from the hamlet Ye, close to Mirador del Rio on Risco de Famara. The northern slopes of the mountain are covered with fields, in most of which vine is grown. 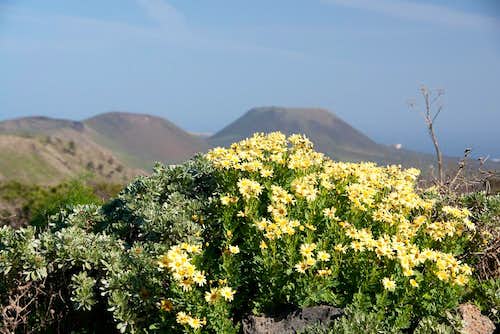 Volcan de la Corona and much of the northern tip of Lanzarote belong to the Parque Natural de la Corona. It was created to protect the huge Maplais de la Corona. Farming is allowed in the park but there are only few places where anything can be grown. The northern slopes of Volcan de la Corona are among them and you have to pass several vineyards to get to the base of the mountain. Don't trespass, rather stay on the tracks. This can be difficult at times. 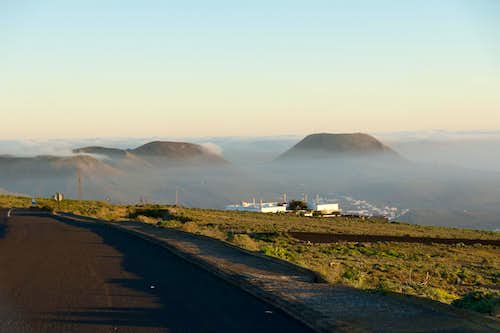 Volcanoes above the morning fog

Lanzarote is usually swept by fierce north-western trade winds. Though they deposit their humidity on almost all of the other Canary Islands, Lanzarote is simply too low to form a decent obstacle. Therefore the climate is very arid. For some time of the year, eastern winds prevail, which almost always carry clouds of Sahara dust with them. Usually, this means reduced visibility but on some occasions, "Calima" occurs. Fierce storms take up the dust from the Sahara and sweep it across the islands. In these times visibility is nil and sometimes even the planes are grounded.