All italicized sections are original text, with some edits.

Casa Grande (Spanish for Big House) is located in the heart of Big Bend National Park, overshadowing the Chisos Mountain Campground and Visitors Center. The hiking trails in the area give you great views of and access to all sides of Casa Grande, and they can be quite crowded close to the parking area. The mountain is roughly a square in shape with rhyolite cliffs and a flat-topped summit. Erosion has created plenty of passages up to the summit with some rock scrambling or easy climbing move being the crux of the climb. Rock climbing to the summit is an obvious option, but unless you're well versed in protection placement, you might at least second-guess that option since rhyolite doesn't offer the most secure protection.
Although it is not the highest peak in the Chisos Mountains (not even in the top three, in fact), Casa Grande might be the range's most distinctive and commanding one due to its sheer cliffs and its commanding position above the lodge and campground in the Basin, the busiest section of Big Bend National Park.
As one would expect, the summit views are sweeping, and standing at the edge of the sheer cliffs of the northeastern face can feel a little dizzying. Contrary to what one would expect from below, there is no view straight down to the lodge area; you will have to get on one of the false summits if you want that. 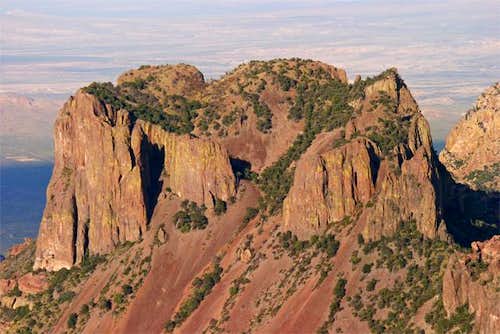 Casa Grande as seen from Emory Peak. Photo by smudge.

Despite the allure of the dramatic cliffs, technical climbing is not a great idea here and in most other parts of Big Bend. The rock tends to be both loose and friable. Legendary climbers Herb and Jan Conn did climb a line somewhere on the north face, and that route has apparently never seen a repeat ascent.
Instead, the main routes to the summit are more pedestrian, though not without their own challenges.
The first, and seemingly the more used, is via the Lost Mine Trail. Drive to Panther Pass and park at the trailhead, which can fill by 9 during peak visitation times. Hike about a mile to a pass and then strike out on the ridge leading to Casa Grande. There is a climber's trail almost the entire way, but you will still have to deal with some steep scree and some brush. 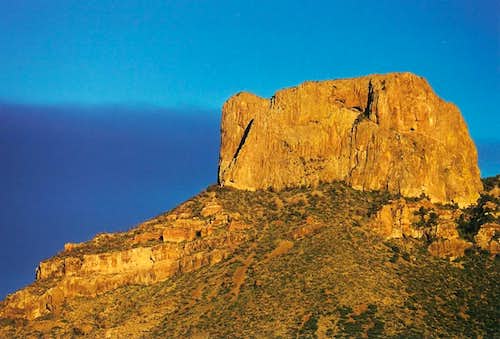 Casa Grande at Sunset
The second is via the massive slide on the south side of the peak. From the lodge area, hike about a mile or so on the trail system to Emory Peak and the South Rim. Leave the trail and bushwhack (denser than you might expect) to the slide.
Both routes converge at a notch just below the summit. The use trail winds up to the summit, making the easiest way up no harder than Class 2, but at the notch, there is a dry waterfall (look for the very dark rock) that provides a fun Class 4 or low 5 way to the top.
If you can arrange a shuttle, go up via Lost Mine and down via the slide for a nice tour of the peak. I do not recommend the slide as an ascent route unless you love long, steep scree slogs.
By either route, one-way distance to the summit will be 2-3 miles with 2000-2300' of elevation gain. 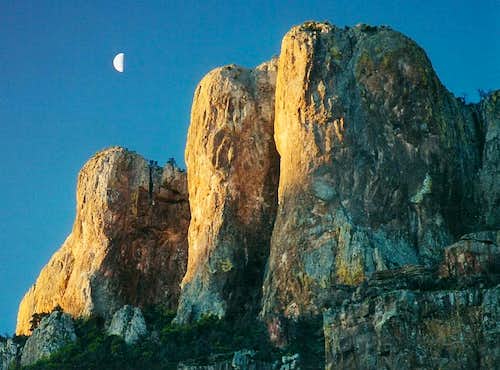 Inside the park, drive up the 6-mile road into the Chisos Basin. Park either at the Lost Mine Trailhead or the lodge area, depending on the route you choose.

The entry fee, good for a week, is now $25 (March 2017). Annual passes are available, as are interagency passes, which cover entry to all federal fee areas. The latter currently cost $80.
Before climbing, check the park website for possible area closures to protect nesting peregrine falcons. Several years ago, Casa Grande was closed for certain periods due to this. Presently, it is not, but other areas in the Chisos are.

All year, but start very early and carry extra water if you climb this peak late spring into early fall. On a summer day that is 110 at the river, it will still be in the 90s atop Casa Grande.

There is a large, popular campground at the Basin. During certain times of year, some sites can be reserved through recreation.gov. 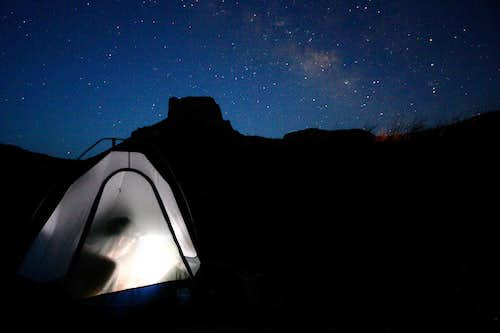 Who Needs a Five Star Hotel? By Mark Doiron

On the summit there is a little jar tucked under a prickly pear that contains a little notebook and a pen. I found it accidentally when I nearly sat on it. People have been signing it for years. I found it on the northern side of the summit, about 6 feet from the edge. Good luck finding it!
I did not find this but did not know to look for it, either. It would be cool to know if it's still there.