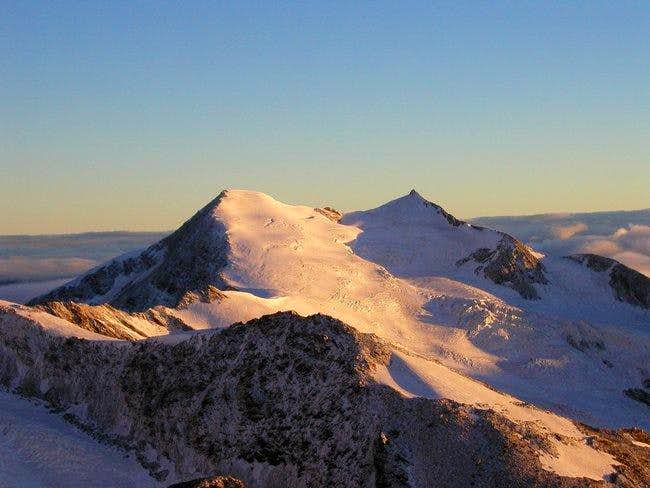 Cevedale is a mountain belonging to the omonimus group (Ortles-Cevedale) in the Italian Stelvio national park. It ranks the top three mountains of the park in height. From the peak it is possible to admire the wonderful scenario of the mountains range of that region, among which Gran Zebru' (Konig-spitze), Ortles(Ortler) and San Matteo.
The best season to alpinism activities it's between June and September: It's necessary absolutely to use the crampons and the ice-axe on the path from the refuge Guasti-Casati and the peak. It's also recommended to climb on the rope (presence of crevasses on the path). It's also usually frequented by alpinist-skiers during the Spring.
It is possible to arrive by car from Santa Caterina Valfurva to the refuge 'Ghiacciaio (glacier) ai Forni' (2.170 m.), where there is a free wide parking area. To enter the park it isn't required any permit but the only respect of it's natural rules. Be careful: the area has been during the first world war. In case you find out any old war weapon, do not touch it and call the police guards.

NORMAL ROUTE:
From the refuge 'Ghiacciaio (glacier) ai Forni' (2.170 m.) walking trough an easy path in two hours to Refuge Pizzini Frattola (2.700 m.) and then in another hour and half toRefuge Casati (3.200 m.), where I advise anybody to sleep. From the refuge it is possible to walk through the glacier on a path that brings to the peak after about a three hours trip.

Another solution to reach refuge Casati start from Refuge Città di Milano (by telpherage from Solda/Sulden). The second day through ice lake mountain pass you arrive in about 3 hours and half to refuge Casati (be carefull, many crevasses in the part between ref. Milano and the pass).

CROSSED TO PALON DE LA MARE: It's a very nice possibility: in the same day you can continue the trip on the ridge to "Palon de la Mare" (2 hours) and come back to "refuge Ghiacciaio Ai Forni" from the Palon de la mare normal route. It belongs 5 hours from the "Mount Cevedale" peak to the refuge. If you you have some problem to complete the round trip, you can sleep in bivouac Colombo, situated on the ridge between the "Cevedale" and "Palon de la Mare" peaks.

A good idea may be to spend some days on easy mountaineering like Cevedale and Palon de la Mare and some others in the area. When you're ready for something steep, and you have the necessary experience, consider the climb to Gran Zebru. A guided climb may be an unforgettable experience for learning on ice climbing considering the technical aspects of the mountain. Mountain guides available through the information office +39-0342-935544.

Route suggested by Claude Mauguier:
From Guido Larcher hut, one must first go up to La Forcola pass (3032 m.), then climb the whole ridge leading to Cevedale II (3757 m.) sometimes called Zufall Spitze (actually the northern false summit of Cevedale II, 3700 m.), 2 km long, mainly on scree, loose rock and snow patches. The connecting ridge between Cevedale I and II is about 800 m long, and (was...) exclusively on snow/ice, with a rock outcrop halfway. This might be tricky if iced, and a bypass could then be tempted on the right (north) side on steep ice, for the southern flanc would involve a quite consequent loss of altitude + schrund crossing, due to the general dramatic diminution of glaciers.

The best season to alpinism activities is between June and September. To lead Cevedale peak it's necessary absolutely to use the crampons and the ice-axe. Is also recommended to climb on the rope (presence of crevasses on the path).

Refuges of the Area