Climbing North Timpanogos via the Cold Fusion Couloir: May 31, 2008 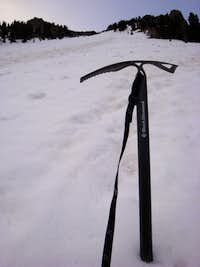 Looking up the middle section of the couloir 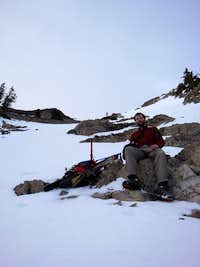 Sean rests about 2/3 of the way up the coulior 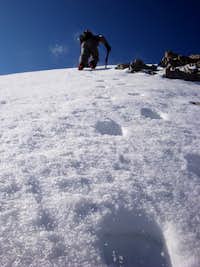 Climbing just below the false summit

The forecast for May 31, 2008 for Utah County called for sunshine and warm temperatures causing my climbing partner, Sean Peckham, to wisely voice the perception that perhaps the night time temperatures, even in the mountains, might not be low enough to freeze the snows. Neither of us wanted to deal with post holing but I had summit fever, plus I had already had to postpone climbing North Timpanogos Mountain two other times this season and so I stated that the snow would be solid enough in the Cold Fusion couloir provided we got an early enough start. He agreed, mentioning something technical about radiation imbalance, and so we decided to go for it!

The typical route to the base of the Cold Fusion couloir starts at Mutual Dell in American Fork Canyon and initially follows the Bear Canyon trail for 2 miles and 1,400 vertical feet to the Timpanooke road. The route then travels the relatively flat dirt road for about three miles to the base of North Timpanogos Mountain and the bottom of the Cold Fusion couloir. The distance up the couloir to the peaks of North Timpanogos is about one mile and climbs over 3,000 vertical feet with slopes as steep as 42 degrees. Sean and I reasoned that once in the couloir we would need about one hour of climbing time for each 1,000 vertical feet. We also estimated that it would take as around 3 hours of hiking time to cover the five miles to the bottom of the couloir. We decided it would be wise to enter the couloir around, or slightly before sunrise, when temperatures would be at their lowest, and the snow at it’s firmest; and so we arrange to meet at the mouth of American Fork Canyon at the unnatural hour of 12:45 am.

True to our plan, we hit the Bear Canyon trail on schedule at 1:30 am, and we were soon wandering our way up through the forest and over several fall trees to the Timpanooke road, yawning as we moved along. Being a skiing enthusiast Sean had opted to pack in his AT ski gear to use on the descent. Even before we reached the dirt road we crossed through sections of snow and were please with the stability it offered. Before we knew it we reached the Timpanooke road, and within a half mile of traveling west along the dirt road, we paused to put on additional layers of clothing as the night was clear and relatively cool at that elevation. Traveling at night, in unfamiliar territory, definitely added some time to our estimate as we continued along the road which was often covered with encouragingly solid snow.

In the dark, we wandered past the couloir, believing it was around the last hairpin turn where the road beings to head generally south (when in fact it is between the last and second to the last hairpin turns before the road heads south – in the light of day it would be tough to miss). It didn’t take us long to realize our oversight, and fortunately, Sean had his GPS programmed with way points which we used along with a little bit of luck to bushwhack are way from the road and before long into the couloir. Even with the added time of the bushwhacking, and some backtracking, we were still in the couloir by 5:15 am with only hints of the sun beginning to appear. By the time we were ready to begin climbing, having paused to consume food and water, and to strap on our crampons, it must have been very close to 5:45 am as the light of the sun was sufficient enough for us to put away our headlamps as we marched forward into the couloir.

We found the lower section of the couloir to be relatively narrow and sloped between 25 and 30 degrees with basically no obstacles to navigate; however flat-footing it through this lower section did put pressure and friction on our heels. Alas, stopping to tape our tender heels was not necessary as the friction subsided as we proceeded up into the steeper (30-40 degrees), wider, middle section of the couloir. With the snow being rather hard we did not often kick in steps, but relied more on the front points of our crampons to allow us to ascend, however we did see evidence of steps kicked in by prior climbers from previous days and likewise holes made by their ice axe shafts. As we climbed the ever steepening section much to our satisfaction we found several intermittent rock outcroppings that made nice resting spots. I believe Sean with the extra weight of his ski equipment appreciated these natural resting spots even more than I did! Just shy of the first (aka "false") summit who’s elevation is 11,383 ft, the snow cover became shallower and narrower and occasionally patchy yet even through this final section we only had to walk on rocks once and only for a couple of feet. That section of the climb would not have made good skiing on the descent and so Sean didn’t see the need to haul his ski equipment any further. 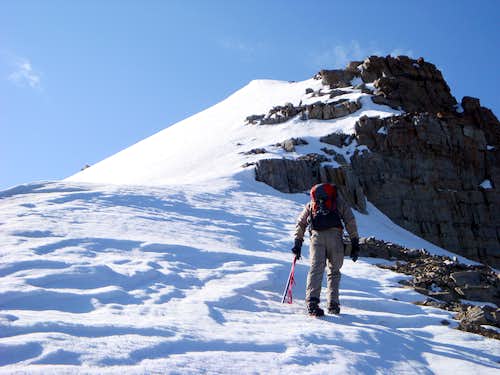 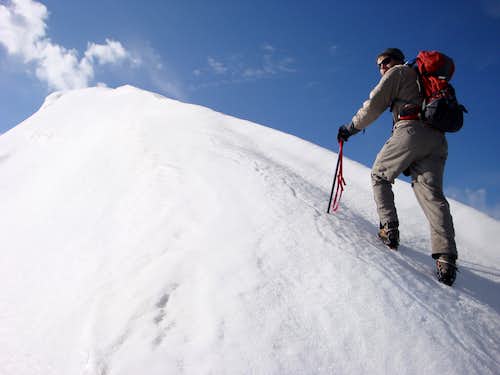 Sean, about to top the false summit

It was about 8:45 am when we negotiated the final snow pack and landed on the false summit, making our ascent time up to that point about three hours. The views to the south of the true summit, with Mount Timpanogos behind, were breathtaking; as were the views to the north of Lone Peak, Upper Bells, Box Elder, the triple traverse, etc. Looking east the sun was bright, but we could see Deer Creek reservoir; and to the west and north west Utah Lake, Utah County suburbs, and the Oquirrh mountains were illuminated. 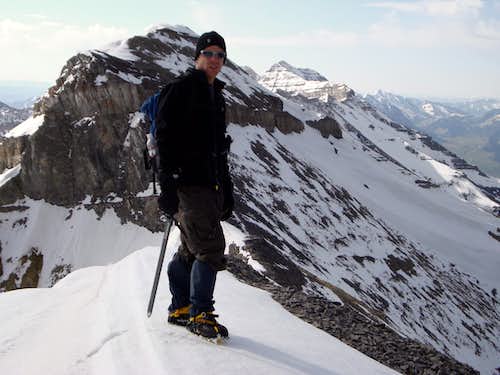 Looking south at the "true" summit of North Timpanogos from the "false" summit. 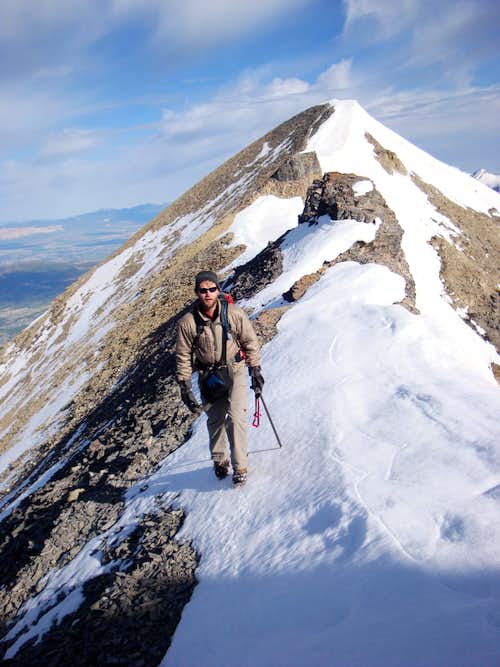 Sean leaving the false peak enroute to the true summit.

After taking a few pictures, we soon pushed on to the true summit. As we dropped down to the saddle between the two peaks, above the Grunge couloir, the snow became very thin and patchy, and so I opted to remove my crampons leaving them there for the descent. We had read that the push to the true peak involved a class four section through a rock band, but we were relieved to find that it was nothing more than an unexposed class 3 scramble at best. Once over the rock band, the 11,441 ft peak was clearly marked by a large cornice, and we found ourselves on top at approximately 9:15 am. I took a picture of myself sporting a huge smile which very much captures the way I felt! Once again the views in all directions were outstanding. 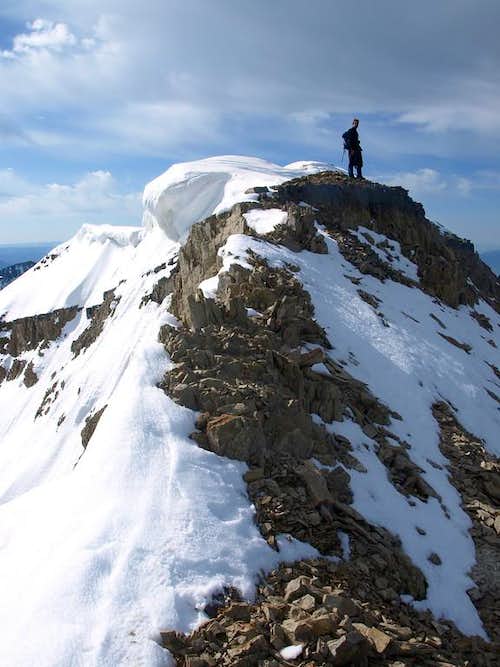 Buried in a shallow rock cairn, we found a mailbox, and inside a moist coil ring notebook acting as a summit log. The most recent entry appeared to be from May 14, about two and a half weeks early, making me wonder how the tracks we had seen in the middle section of the couloir had weathered so long. After signing the log book, drinking water, consuming calories, and taking pictures we decided to begin the descent.

Once we made our way back to the top of the Cold Fusion couloir, I told Sean that I would go ahead and start heading down while he put on his ski equipment. That way I could get myself in a position to shot some video of him skiing down. I both down-stepped and glissaded to the rock outcroppings at the top of the middle section, and there I waited, camera ready, for Sean to start skiing down. It took him a little while to get ready for his ski descent, and around 11:00 am, with the snow in pretty much peak corn condition, he came fluently down make one S-turn after another as I captured some of it on video. Next, it was Sean’s turn to capture a few moments on video of me glissading down.

With the videoing out of the way, Sean moved out ahead of me, and down the remainder of the couloir. Unsurprisingly, my glissade approach also was quite rapid, and very soon we were both at the end of the couloir where a large pine tree had fallen over it blocking the view of the Timpanooke road just a few yards below. At the fallen tree, we changed into our hiking gear, for the five mile slog back to Mutual Dell. Earlier, while waiting to do the videoing, I had run out of water, and as such I was eager to start down the road, where about a half mile east I had stashed a liter of water for the return trip. When we climbed over the fallen tree, and onto the road, we were both surprised that we had walked past the couloir the night before, as it was readily visible.

In our tired state, marching down the road seemed to take forever, and it would have been easy for us to have missed the Bear Canyon trail if I hadn’t scraped an arrow in the snow the night before. We had to laugh at our lack of manners when about half way down the Bear Canyon trail, we crossed a group of three or four hikers walking up the trail who were curious about Sean’s cross country skis (as one of them called them) as well as what we had been up to; neither of us simply had the energy to answer their questions. By 2:15 pm, we reached Mutual Dell and Sean’s car; much in need of food, water, and sleep but enthralled with an incredible sense of accomplishment! 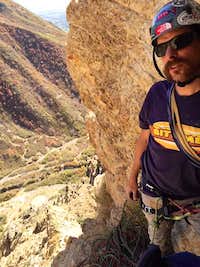 Should be front page material.

I'm not a big fan of glissading and your video made me less so. Looked like a pretty hairy run-out if you were to lose control.

Great job on your report. Awesome!

just when I thought I could come off my high and get some work done...

...you had to go stirring up great memories with this excellent TR. I don't know about you, but I was not only too tired, but too dumbfounded to explain what we were doing up there "cross-country skiing on rocks."

Fun read and great video. Thanks for posting!

Climbed North Timp via the Cold Fusion Couloir May 9, 2009. Being familiar with the area and the route, this time the hike/climb was much faster. We left Mutal Dell at 4:10 am and arrived at the mouth of the couloir by 6:20 am. By 6:30 am we were climbing the couloir and the first person in our group reached the 11,441 ft true summit of N. Timp by 8:20 am. Just over 4 hours from the trailhead to the peak, and just under 2 hours on the couloir.

The whole trip, with breaks etc included, was just barely over 8 hours. Knowledge and good conditions can sure speed things up!

I should also mention that the couloir had much more snow in it this year, and the cornices on the peak were much larger (of course last year, 2008, we did it three weeks later in the month).