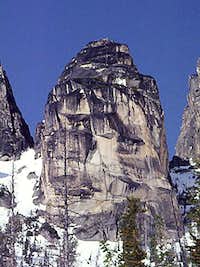 From the west
Concord Tower is the summit immediately south of Liberty Bell Mountain in the Liberty Bell Group above Washington Pass in the North Cascades of Washington State. The rock is excellent granite and the tower has two routes on the north face and two routes on the south face. Unlike the other summits in the group, there is not a long difficult route established on its east face, rather, there is a subsidiary tower called The Minuteman which has a six or seven pitch route to its top which is about 600 feet below the summit of Concord Tower. 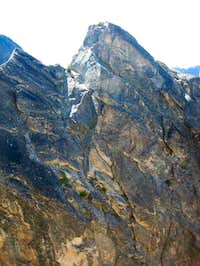 From the north
The most popular route on Concord is the North Face, which is easily combined with an ascent of the very popular Beckey Route on Liberty Bell since they both start from the Liberty Bell - Concord Notch. Another good combination is one of the south face routes on Concord with the North Face Route on Lexington Tower as the routes start in the Concord - Lexington Notch.


It is possible to descend either the north or south (a long two rope rappel) side of Concord to put together any kind of combination wanted. (I am aware of at least one north to south and one south to norht traverse of all five summits of the Liberty Bell Group in one long day)

Fred Beckey and John Parrrott made the first ascent of Concord Tower on 12 June 1956 via the North Face Route. 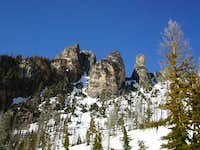 West side approach.
Concord second from R
It is also possible to reach west side from the hairpin curve to the east of Washington Pass. Climb to the top of the basin to the south of the Early Winters Spires, then traverse high along the base of the rock on the west. This approach is best done when the basin is still snow filled (taking care regarding avalanches).

South Face, East Side, 5.6, two pitches to the top of the face, then an exposed traverse along the top to the summit which must be reached via the last 5.6 bit of the North Face Route. Climbing on the face itself is about 5.4.
First Ascent: Donald Anderson, Donald Cramer, & Fred Stanley, 1965.

South Face, Center, 5.7 / A3, two pitches on the face and a finish via the last bit of the North Face Route. Starts about 100 feet west of the East Side Route.
First Ascent: Mark Fielding & Frank Tarver, May 1966.

Scott Davis and Bill Lingley made the first ascent of the Minuteman on 30 July 1967.