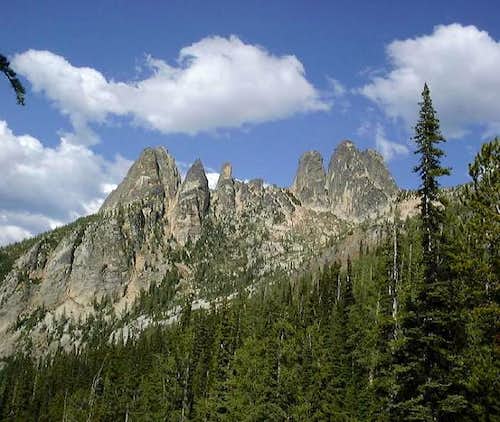 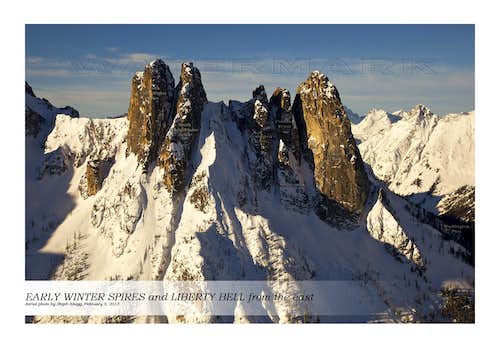 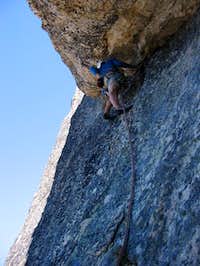 The Liberty Bell Group hosts some of the best rock climbs in the state of Washington. The rock is for the most part excellent rough granite. Loose rock is seldom encountered on the more popular and frequented routes. Climbs range from short 2 to 3 pitch easy Class 5 to Grade V Big Wall type routes on some of the east faces. There are several excellent snow and ice climbs in the group through most of the spring.

With the exception of Blue Lake Peak and South Early Winters Spire, none of the summits can be reached by routes of less than 5.4 in difficulty. Blue Lake Peak is not composed of the same fine rock as the main towers. The rock there is highly fractured, breakable and loose. The only recommended routes there are Class 3 / 4 scrambles. The SW Couloir on South Early Winters Spire is Class 4 without snow and contains a great deal of loose rock. This is a climb far better done in early season as a steep snow / ice climb.

This is a very popular area and parties should not expect to have any of the more popular routes to themselves. People start climbing in the group as soon as the road is open and persist until the road closes in the late fall. Climbing usually starts with the snow and ice climbs, but some of the south facing rock routes melt out very early especially on low snow years.

The relatively short approaches make it possible to climb two or more of the short to moderate length climbs in one day. At least one party has completed a north to south traverse of the entire group including Blue Lake Peak in one day.

On fine warm summer days, the area can take on the air of a local cragging trip (with far better scenery), but in marginal weather particularly in early or late season there is a definite alpine feel to the climbing.

In the spring, the area is very popular with skiers and snowboarders.

Members of the Group 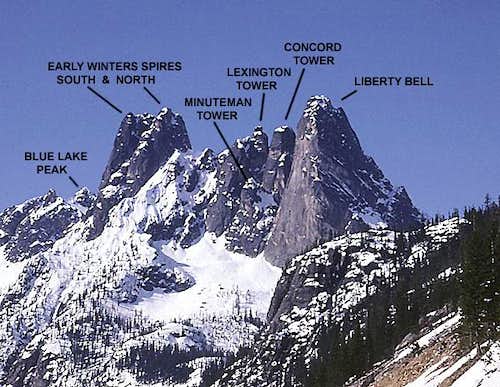 Liberty Bell Group from the north

The members of the Liberty Bell Group are from north to south:

Please see the individual pages for details. Links are in the sidebar. 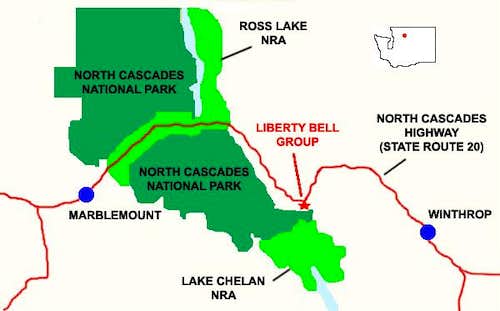 The portion of State Route 20 crossing the Cascades crest between Winthrop and Marblemount is also known as the North Cascades Highway. This section of the road is closed during the winter season with the opening date dependent upon the snow pack in any given year. Details regarding opening can be found HERE

There are two basic approaches to the climbs in the group. The approach from the west starts at the Blue Lake Trailhead just west of the pass. This is the more gentle approach; less prone to avalanche when snow covered and with most of the route being on a well beaten in climber's trail once the snow is gone.

The approaches from the east start from the highway at the hairpin curve or several smaller parking spots just east of the pass. Approaches from this side are on steeper slopes having avalanche danger early in the season and less well traveled climber's trails after the snow melts.

See the individual pages,route pages, and maps to determine the best approach for the climb you wish to do.

The guidebook with the most comprehensive coverage of routes in this area is:

CASCADE ALPINE GUIDE, VOL 3: RAINY PASS TO FRASER RIVER: Climb & High Routes, 2nd Edition by Fred Beckey. It is published by The Mountaineers and describes 48 routes on the main towers.

Most other guidebooks have selected routes.

SELECTED CLIMBS IN THE CASCADES VOL 1, and VOL 2 by Jim Nelson and edited by Peter Potterfield contain selected routes.