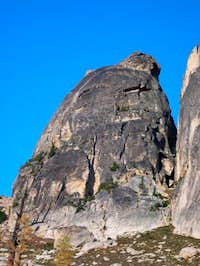 North Early Winters Spire is the most difficult summit of the Liberty Bell Group. At one time, it was considered to be one of the most difficult "major" summits in the North Cascades. It is separated from the South Spire by a deep notch. The rock is excellent granite and there are routes on all sides of the peak with none easier than 5.7. Wesley Grande, Pete Schoening, and Dick Widrig made the first ascent of North Early Winters Spire on 28 May 1950 via the Southwest Face Route.

It is also possible to reach west side from the hairpin curve to the east of Washington Pass. Climb to the top of the basin to the south of the Early Winters Spires, then traverse high along the base of the rock on the west. This approach is best done when the basin is still snow filled (taking care regarding avalanches). Washington Department of Transportation web site with information and updates on the spring opening of Washington Pass: Washington Pass Information 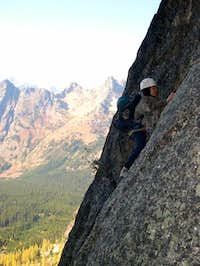 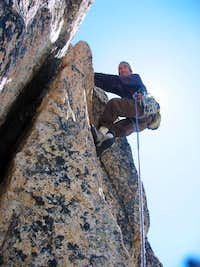 Southwest Face (AKA SW Couloir & South Face), Grade II, 5.7. The climbing on the face itself is about 5.6 if you are on route. Climbing of up to 5.7 and often some steep snow is required to reach the notch between the Spires. Four or five pitches, 3 to 4 hours. First Ascent: Wesley Grande, Pete Schoening, and Dick Widrig, 28 May 1950. West Face, Grade II or III, 5.9 / A1 or 5.10d. This route goes more or less directly up the west face. About 6 pitches, 4 to 5 hours. First Ascent: Fred Beckey and Dave Beckstead, 17 June 1965. Labor Pains, Grade III, 5.11a. Between the West Face Route and the Southwest Face Route. Five pitches, two of which are 5.10 & 5.11. First Ascent: Steve Risse and Donna McBain, September 1988. Northwest Corner, Grade III, 5.9. Ascends the Northwest Corner of the Spire. Seven pitches, about 4 hours. First Ascent: Paul Boving and Steve Pollock, 25 September 1976. North Face, Grade II or III, 5.9. Poorly defined, finishes with the last pitch of the Northeast Face Route. About 6 hours. First Ascent: Andy Cairns and Bill Thompson, July 1985. Northeast Face, Grade II, class 5 and aid (a good old fashioned Beckey rating). About 400 feet. First Ascent: Fred Beckey and Joe Hieb, 31 August 1958. East Buttress, Grade III or IV, 5.8 / A1 or 5.9. More or less directly up the east buttress, 11 pitches, bivouacs not uncommon. First Ascent: Steve Marts, Don & King McPherson, July 1965. East Couloirs, difficult mixed snow, ice and rock, recommended only in winter or early spring. There are two couloirs, one to the North - South Early Winters notch and one to the base of the north face of North Early Winters Spire. First Ascents: Lowell Skoog and Gary Brill, May 1977 and May 1978. Descent:The Southwest Face Route is the preferred descent route. One rappels the South Face into the notch, then down climbs and rappels the SW Couloir. Up to 5 rappels depending on conditions and number of ropes including a very nice 50 foot free rappel off the "giant chockstone". The Chockstone Rappel: 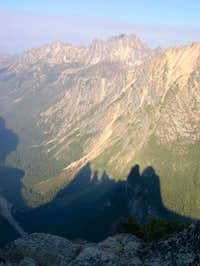 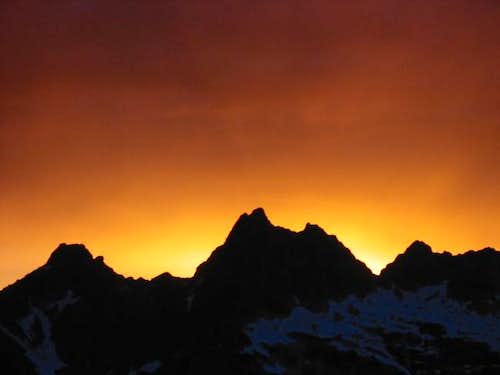 Veiw west at the end of the day.