Though not one of Nebraska's highest points, Courthouse Rock is one of the most prominent summits in the state, rising 400 feet above the North Platte River Valley. Together with its neighbor, Jail Rock, Courthouse Rock is among the most famous sites along the historic Oregon Trail. According to Lists of John, there is 295 feetof prominence on Courthouse Rock, and the summit shows up on the USGS Courthouse Rock Quad map. 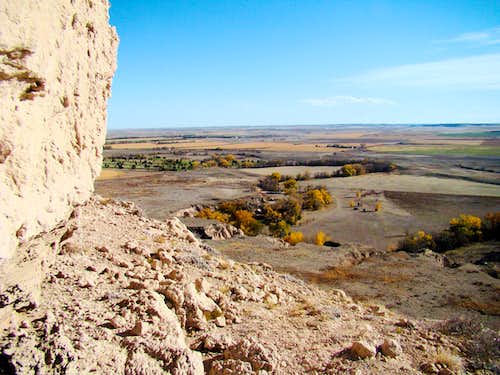 Autumn Color in the Pumpkin Creek Valley Below

For many Oregon Trail emigrants in the middle of the 19th century, Courthouse and Jail Rocks were the first impressive natural landmarks they had ever seen. As a result, this butte is mentioned hundreds oftimes in the diaries of emigrants--and many of them chose to paint or draw it and, of course, to climb it as well. According to legend, an emigrant accused of murdering another member of his group was given an impromptu "trial" and subsequent execution on the summit, hence its name. 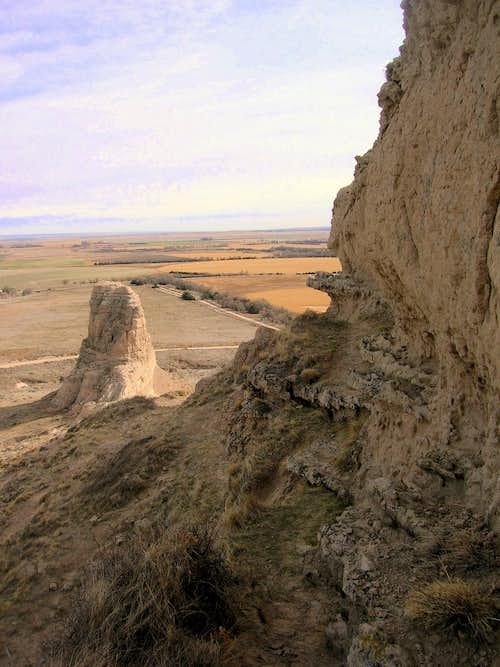 For today's climbers, the butte is a worthwhile trip, offering expansive views of the surrounding region. The massive monolith is comprised of Brule clay, volcanic ash and Gering sandstone. In some ways, the “tiers” on this formation resemble a cake. Nearby, to the southeast along Pumpkin Creek, is the site of an old Pony Express station. 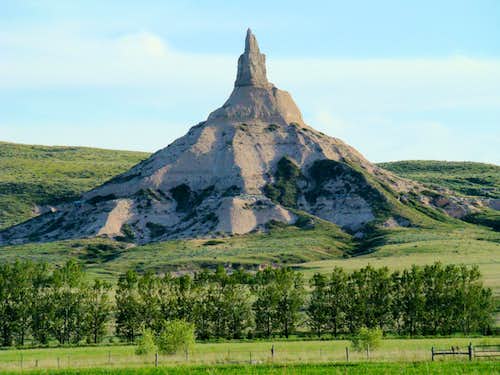 Like the stories about battles between Native American tribes at Crow Butte, far in the northwest corner of Nebraska, there are stories about a battle between the Sioux and Pahani tribes at Courthouse Rock, with the Pahani trapped at the summit. The legend goes that they escaped down one of the sheer sides by rawhide ropes in the middle of the night. The Wildcat Hills, in which Courthouse and Jail Rocks are located, also includes Chimney Rock (visible from Courthouse's summit) and Scotts Bluff. Courthouse and Jail Rocks are listed in the National Register of Historic Places.

Note: This page was originally created by Vagabond Manifesto, who has moved on to other interests. 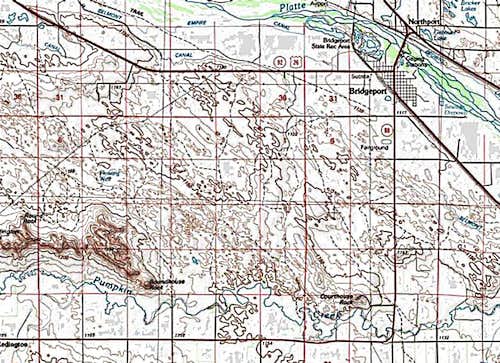 From Interstate 80: Take exit #59 (Highway 385) at Sidney and follow Hwy. 385 north for 43 miles to Bridgeport. In Bridgeport, turn south onto Highway 88. After five miles, turn at a well-signed gravel road (the sign reads "Courthouse and Jail Rocks") and follow the gravel and dirt road for about a mile to the parking lot at the base of the buttes. 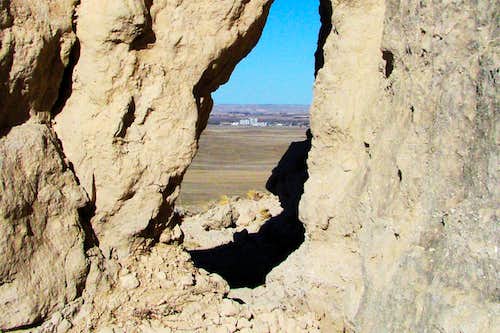 View of Bridgeport Through a Rock Crevice

From the east: An alternate route for westbound Interstate travelers is to take exit #126 (Highway 26) at Ogallala and follow Highway 26 for about 100 miles to Bridgeport. This route traces the Oregon, California, Mormon, and Pony Express Trails. At Bridgeport, follow the directions given above. From the northwest (Scottsbluff): Take Highway 26 to Bridgeport and follow the directions given above.

There are no visitor services (restrooms, etc.) at Courthouse Rock, and there is no fee--just a parking lot. The area is open year-round from sunrise to sunset. 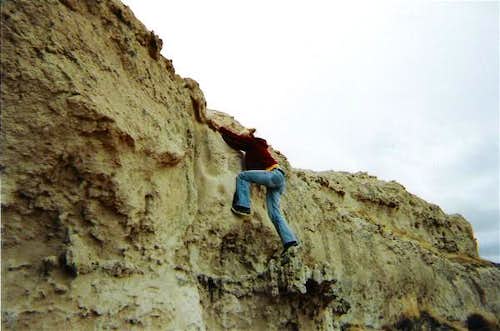 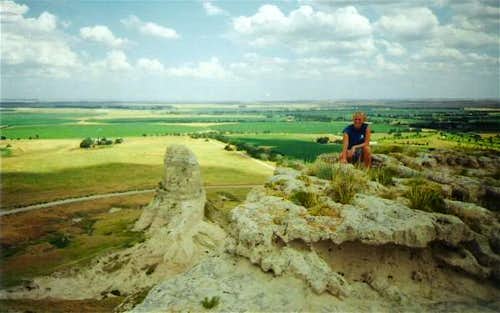 On the summit of Courthouse...

Courthouse Rock can be climbed at any time of the year in dry weather. Some of the accompanying photographs were even taken in December. The softclay and sandstone of the butte can be slippery even when it's dry, so climbing in rainy or snowy conditions is foolhardy. Be prepared to search for alternate routes, if you find your preferred route has fallen victim to a washout or rock slide. There is a possible alternate route up the second to the last tier on it’s west end, though some of the crumbly rock lying over the the more stable surface below would be best cleared before relying too much on it. I would not rely too much on a climber’s pick with this crumbly rock. 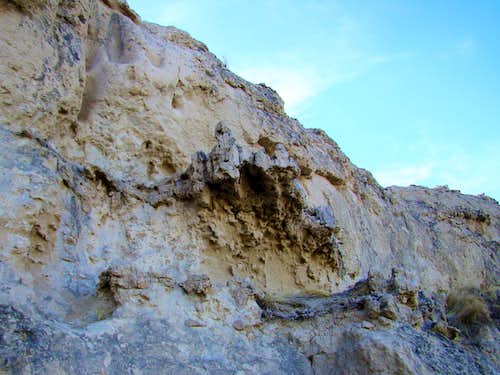 Though there are no documents to prove it, records of post-climb comments might suggest that in all probability a majority of climbers who attempted to reach the summit turned back before completing the ascent. No doubt, this has much to do with the crumbly composition of the “rock” the monolith is comprised of, plus the very steep sides. As you climb, you will find well-worn grooves and footholds in the sides. However, if you examine carefully, you will also find broken-off foot and hand holds. Lest you think that occasional reports of route damage has made the summit impossible, you can checkout the 2019 YouTube video link at the bottom of the page for a 2019 group ascent of Courthouse Rock. There is also a YouTube video link for an ascent of Jail Rock, which appears even more formidable than Courthouse Rock. 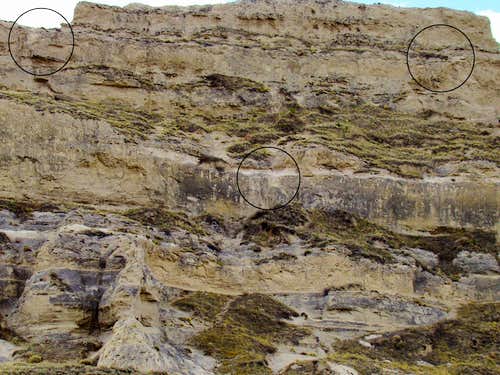 The circled areas in the photo of the Courthouse Rock north wall, show three key areas that can be used in your ascent.

Your best bet for noncommercial camping nearby, is the Bridgeport State Recreation Area, just outside of the town of Bridgeport. State park and camping fees are required. You can learn more at this link: