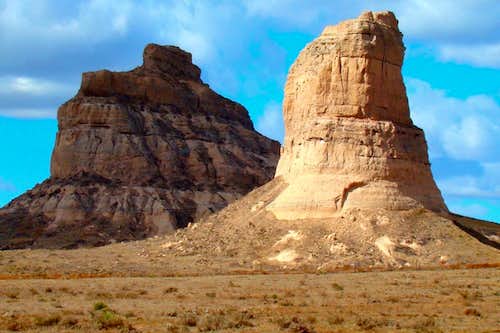 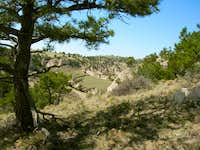 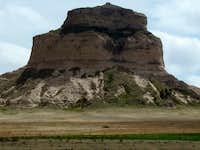 Extending nearly 60 miles east to west and lying in Banner, Scotts Bluff, and Morrill counties, the Wildcats Hills of western Nebraska are an escarpment composed mainly of layers of sandstone, siltstone, volcanic ash and limestone. Though they cover a smaller area than Nebraska’s Pine Ridge 65 miles north, they are geologically similar. The North Platte River flows along the northern edge of the Wildcats, while Pumpkin Creek defines much of the southern edge.

Like the Pine Ridge, the Wildcats are characterized by rugged buttes, small mountains, deep canyons, and ponderosa pine forests. It is an area rich in fossils. Famous landmarks include Scotts Bluff, Chimney Rock, Courthouse Rock, and Jail Rock, all known for being marker points along the old Oregon Trail. Just like the ecology of Nebraska’s Pine Ridge farther north more closely reflects that of the Black Hills 40 miles to its north, so the Wildcats reflect the ecology of Wyoming’s Laramie Range 60 miles west. Deer, pronghorn antelope, elk, bighorn sheep, coyotes, wild turkeys and mountain lions inhabit the region. Rattlesnakes are occasionally seen in the Wildcats, though non-poisonous snakes are much more common. 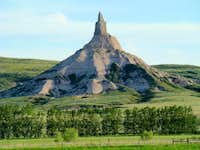 The Oregon Trail and the “Mormon Trail” followed the valley of the Platte and North Platte Rivers through Nebraska during the period from 1839-1869. The Wildcat Hills provided the early settlers some welcome relief to the hundreds of miles of flat plains along the Platte River. Before the arrival of settlers from the east, Native American tribes lived and migrated through the Wildcats Hills, finding great hunting opportunities there. Many Native American artifacts have been found in the Wildcats. The Wildcat Hills are the site of the famous Robidoux Trading Post. Built by Anoine Robidoux in 1851, the post was located in a secluded canyon near the Oregon Trail. Native American tribes traded furs at the post for needed supplies. The post also contained a blacksmith shop. The post has been re-built on its original site, and great efforts have been made to make it authentic, including a buffalo grass sod roof. 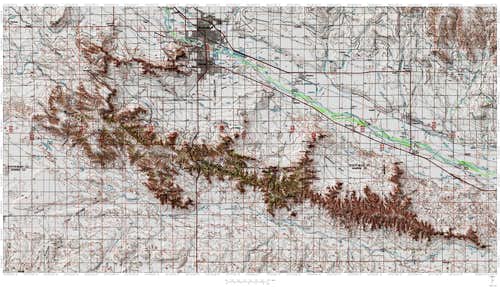 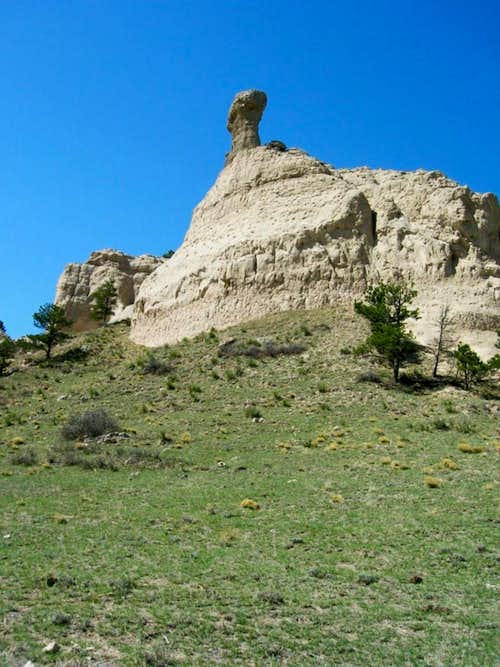 While there are a few trails in these public areas, most hiking and climbing will be off-trail. Careful study of all available topo maps, posts of area geocachers, and talking to state game and wildlife officers will all be very helpful to planning a trip that will not include unpleasant surprises. Since the great majority of the land in the Wildcats is private, if you want to venture into these areas, you will need the landowners permission and advice. There are only a few named summits open to the public, which includes Scotts Bluff, Courthouse Rock, Jail Rock, and Bead Mountain. Some of the best climbing challenges are closed to the public at the Scotts Bluff National Monument, including Dome Rock, Sentinel Rock, South Bluff, Eagle Rock, and Crown Rock. The monument officials believe the rock there is too unstable to be safe, and do not want to see either them or any climbers injured. There are unnamed summits and canyons that can be explored in some areas like Carter Canyon, Buffalo Creek, Cedar Canyon, Montz Ranch, Wildcat Hills State Recreation Area, Bead Mountain, and Murphy Ranch.

Two of the highest summits in the state, Hogback Mountain at 5070 feet and Wildcat Mountain at 5025 feet, are on private land. If you can obtain permission to climb these, they are readily accessible near the junction of highways 71 and 88, a few miles south of Scottsbluff. Gabe Rock, at 5010 feet, is a few miles south of here, but again on private property. To explore summits and canyons on private lands will require the interested hiker/climber to contact the owner. Usually the best approach is to go to the home nearest the objective and inquire. The other alternative involves the tedious task of contacting public officials for plat maps and then tracking down the contact information for the landowners. Some of the great private summits would include Roundtop, Castle Rock, Sheep Mountain, Big Haystack Mountain, Smokestack Rock, Hogback Mountain, Wildcat Mountain, Coyote Rock, Steamboat Rock, and Bighorn Mountain. There are others that would make fun climbs as well.

Though there are over 30,000 acres of public lands, the great majority of the Wildcat Hills are on private or restricted lands. Please be sure you observe all posted regulations on public lands, and consult the landowners for any private lands you may want to access.

Highway 385 passes the eastern end of the Wildcat Hills, while Highway 71 gives direct north-south access through the heart of the Wildcats. East-west highways include 26 and 92 on the north side, and 88 to the south. More specific area maps can be found at area chamber of commerce offices and Scotts Bluff National Monument. Online topo maps are also a resource for locating specific summits, canyons, and access points. The Scottsbluff-Gering area serves as the economic hub for the area around the Wildcat Hills. Airline and bus service is available to Scottsbluff, and car rental services are also available in town. Contact the local chamber of commerce offices to up-to-date contact information. 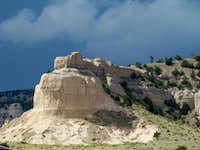 Summer storm approaches one of the southern flanks of Hogback Mountain

Most of the summits, canyons and trails in the Wildcat Hills may be accessed year-around. However, winter blizzards and ice will make that access dangerous, as will summer lightning and hail. To access the latest weather forecasts and conditions, check out the link below: Scottsbluff & Wildcat Hills Area Weather Forecast & Conditions Some of these areas to explore are also open to hunting (Scotts Bluff National Monument is not), so if you are concerned about the risks of hiking in active hunting areas, please check out the page link below for dates and other relevant information: Nebraska Hunting Season Dates & Information If you choose to hike and climb during an active hunting season, be sure to wear plenty of bright orange. 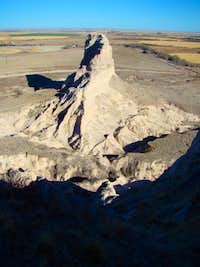 There are several public information resources available to help visitors to the Wildcat Hills region find camping or lodging, food and supplies, and access information. The local chamber of commerce offices can help visitors find the latest updates on these things.