Original winter route up the East face, first climbed in 1978 by Joe Bajan and Ross Nicol. A long route, 1000 meters from Foster Lake to the summit. Direttissima follows a gully to the right of the main summit pinnacle all the way to the summit ridge. Depending on seasonal conditions a couple of small bivy sites are found on the route. Some parties have finished the route, summated and descended in long 27 hour pushes, others have opted to bivy on route. There are several descent options, the quickest is the west gully, located near the gendarme on the upper glacier. 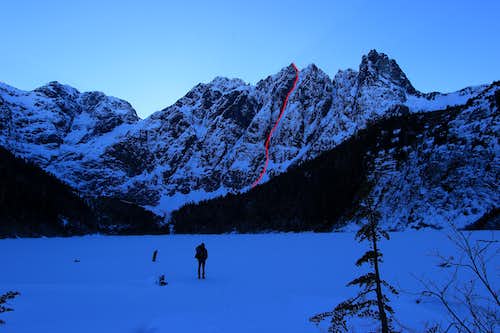 Drive approximately 65 kms from Campbell River towards Gold River on Vancouver Island. BC parks maintains a great hiking trail in the Elk Valley, the Elk River Trail. Look for the Elk River Trail parking lot, and park there. Depending on snow levels, and amount of gear on your back, the 12 km hike may take as little as 4 hours or eat up an entire day. Snow shoes or skis may be required as per snow conditions. 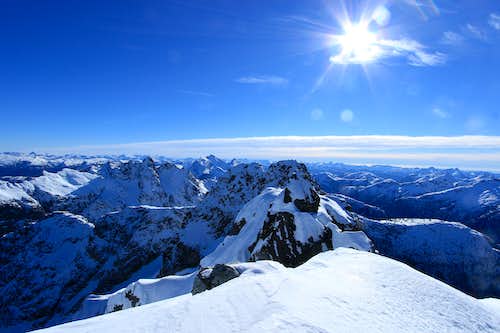 From Foster Lake the route starts on a low angled snow field that rises out of the lake. Follow the gully to the right of the main summit tower and to the left of the North-East tower. If needed, a party could exit this gully and venture out right (towards the Summer route Into the Mystic). There are two crux ice sections- the first is lower down on the route, just above the low angled snow field, with the second crux high up on the route. The first crux requires at least 3 pitches of climbing until you once again reach milder terrain. The upper crux section, initially documented as being 500' required 10 pitches of climbing in 2014, (this could be cut significantly if climbed in daylight and under good conditions)- with the climbing mostly WI2/WI3. Both the lower and upper crux sections have sections of near verticle ice/snow, initially graded as WI5, in 2014 the route felt more like WI3+/WI4. In 2014 there were plenty of healthy run outs on milder terrain, fortunately when things did steepen up the quality of ice improved...To gain access to the summit ridge teams can either stay in the gully or venture out climbers right to avoid a tricky rock section 15 meters below the summit ridge. Once on the summit ridge moderate terrain,  4 Class/low5'th leads you to the summit. 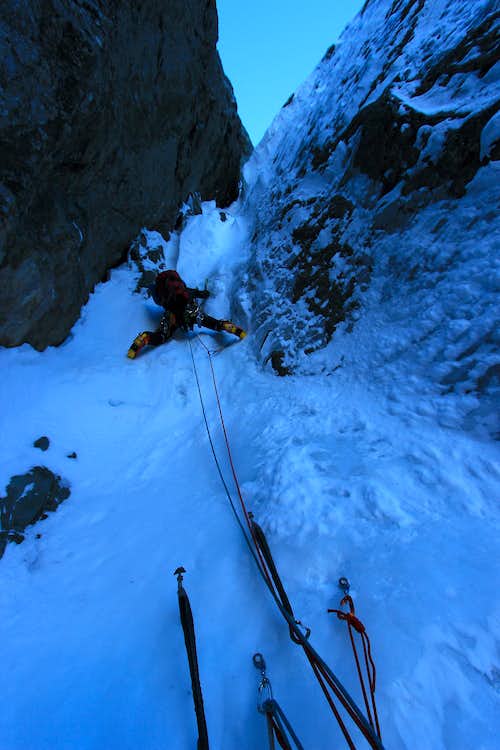 Climbing on Mt. Colonel Foster's Direttissima
A variety of descent options exist, with the easiest being the west gully, located next to the gendarme on the upper glacier, or the gully between the North-West and North East Summits. Rapping the route should be considered in worse case scenarios only. In 2014 we were fortunate to locate the first rap station off the main summit tower. Unless you've been on the traverse, or get lucky like we did, tis best to plan safe and bring a fair amount of rat tat....We ended up only needing 2 raps to get off the mountain. If you choose to go North, towards the North-West and North-East gullies, you may require a lot more. The West Gully is close by, and when in good shape, is a steep but doable down climb.

60 meter Twin or Half Ropes
Full Rack of screws- depending on conditions teams probably will want to heavy up on shorter screws and pack one long screw for v-threads.
Alpine rack of rock gear (this may not be needed for the route itself, but will be needed travelling to the summit and getting off the mountain)
-Range of cams .2 thru #2
-half set of nuts
-handfull of pitons
2 pickets
Fair amount of webbing for rap stations. (In 2014 we only needed to make one rap station, it was a low snow year and we were fortunate to locate some existing webbing that was in good shape. If you end up bailing mid-route, or are unable to locate decent rap tat, you'll potentially use a fair amount)