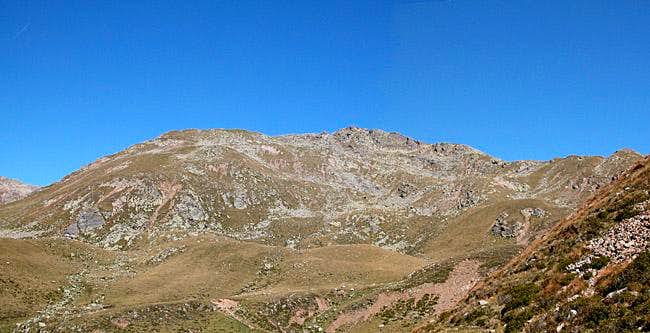 The German word "finster" means pitch dark in English and when you look at the pictures you will easily see why. On three sides the mountain in question is black, only the southern slopes are overgrown enough to make it appear green. Together with the sea of fog lingering in Pustertal Valley below the "pitch darkness" of the mountain ensured heavily overexposed pictures.

Finsterkofel is one of the lesser known mountains of the Villgraten Group of Hohe Tauern. It rises to 2633m and thus appears to be only a bump in the ridge between Regenstein (2891m), Gölbner (2943m) and Gumriaul. In fact it is the southernmost "bump" and as such it commands beatiful views across the Kristeiner Tal and Pustertal Valleys. The mountain is rather popular with hikers who don't want to bother with the long ascent routes to Gumriaul even though the trail towards its summit is not denoted on the usual hiking maps. It is, however; marked pretty well with lots of signposts leading the direction.

I have never seen as many signposts to a mountain but even this is readily understandable. Finstarkofel is a popular ski tour destination and this way you'll be able to find the best ascent route even in winter conditions. Since the route runs over the large meadow of Anraser Alm which is just about featureless the posts certainly have their meaning even in summer.

It must be fun to do the ridge traverse between Finsterkofel and Gumriaul. It is a pitch dark ;-) rocky ridge with a lot of exposure towards Anraser Alm in the south and Kristeiner Tal in the northwest. We didn't do it but it appears to be one of the favourite route for the sheep being kept in the region. During our whole ascent to Gumriaul (later that day) we were followed and observed by sheep following the ridge. It felt like in an old western movie - we only waited for a huge rock tumbling down behind us to block our way ;-)

Hopefully these pictures will explain the popularity of Finsterkofel among hikers of all ages. There are great views to be experienced towards the Lienz Dolomites and Carnic Alps.

The names and colours of mountains

Oh come on! It's not that schwarz.

To be true - when seen alone the name Finsterkofel for this summit would seem out of place. It is an outcrop of blyck rock which takes its name mostly from the fact that it stands out among its glimmering neighbours formed from red gneiss. Similarly a "Croda Rossa" or Rotwand is not red in itself but mainly when seen among its dark or pale neighbours.

In the Alps a lot of mountains derived their name from their colour, the most famous (and highest) ones being Mont Blanc and Monte Rosa. In many cases the colour (especially red) has tickled the imagination as can be seen from the legend of King Laurin and his rose garden or how the Dolomites got turned into the pale mountains they are today. There is many a mountain called Rötspitze, Weisshorn or Croda Nera all over the Alps.

For all of these mountains what has been said above of Finsterkofel holds true: they seem red white or black when seen in conjunction with their surroundings. But how - or why - did they happen to become different? Much of this has to do with the formation of the Alps - you will see large differences in rock composition and colour especially near the large Peradriatic Fault, the separation between the North African and European tectonic plates. This fault follows the main ridge of the Alps some 30 - 50km to the south.

Usually the changes in rock composition can be seen across valley floors. A beautiful example is the area around Madonna di Campiglio in Trentino: to the north across Val di Sole you find the glimmering red gneiss of the Ortler - Cevedale Group, to the west the grey granite of Adamello and Presanella while to the east there are the pale limestone cliffs of the Brenta Dolomites. Here, however, at the junction of Dolomites, Hohe Tauern and Carnic Alps the situation is far more complicated. Here you can find limestone cliffs followed by volcanic rock again followed by gneiss or schist on one ridge. You can see this symptom best when looking at the Carnic Alps Main Ridge where it is most pronounced. The reason is that during the formation of the Alps multiple upheavals occurred in the region, virtually turning everything upside down. And up again.

The Villgraten Group of Hohe Tauern is a far less complex mountain range than the Carnic Alps - here the upheaval occurred more slowly without so many break-downs as described above. Still the gneiss which covers the mountain range is exactly that - a cover. In its base the range consists of black volcanic rock and at places - like Finsterkofel - this rock comes to the surface (a beautiful example for this - though far away is the Padon Chain in the Marmolada Group some 75km to the south-west). 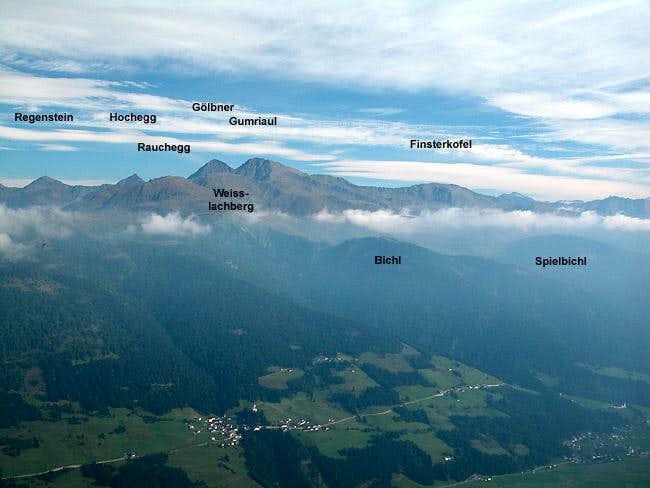 From the West (Brenner Motorway A22)
Leave the Brenner Motorway near Brixen / Bressanone and follow SS49 to the east through Pustertal / Val Pusteria. To the east of Innichen / San Candido you cross the Austrian-Italian border and follow the road (now B100) to Sillian. To Reach Kobreil take B100 to Abfaltersbach where you turn north in the direction of Anras. In Anras, look for signs leading to Kobreil.

From the North
There are two possible roads:

There is no red tape other than the obvious - close the gates behind you. Anraser Alm is a large mountain meadow which is used for cattle and sheep grazing.

Finsterkofel can (and will) be climbed all year around. The hiking season is late May through early October. Ski tours are possible and are often done in combination with the lakes to the south of Gumriaul: Anraser See, Ascher See and Leitensee.

For accommodation click on one of the following links:

In general the weather here is better than in the rest of Austria because the Villgraten Group is located to the south of the Alpine Main Ridge.Look at the following websites for weather information.

Maps
I have been using a map by Kompass Verlag, which is very good for the hiking trails though it does not show ALL the relevant summits of the area.
Books
You’ll probably not be able to find anything on the Villgraten Group in a language other than German. The book I used is