This group page is a joint effort between Mathias Zehring and me. Mathias has contributed almost all of the long overview section as well as all the “unusual” sections about pastures, winter sports etc. I only took the liberty to correct some typos, “improve” the formatting and including some links. My job has been the structuring of the group respecting subgroups, the summit listings and the maps. Several of the sections – like “Weather Conditions” or “Maps and Books” are joint efforts.

Before Mathias takes over with the overview, let me say that I’m looking forward to doing this kind of collaboration more often and with different members in the future.

The Villgraten Group (Villgrater Berge in German) is part of Hohe Tauern, and forms - together with the Rieserferner Group - the southernmost part of the whole mountain range. In character it seems to be a world apart with no summit topping 3000m and none of the glaciers for which Hohe Tauern are so famous. From the geological perspective, however, there can be no doubt.

The group is a quiet mountain range where you won't find masses of tourists or even hikers. If you want to climb summits you have to cope with notable elevation differences. Many mountains are perfect lookout peaks since they are in an ideal position between the glaciers around Grossvendiger and Grossglockner in the north and the rocks of the Sexten/Sesto and Lienz Dolomites in the south. Just have a look at the pages of Gumriaul and Hochgrabe, which have already been posted to SP (or look at some of the panos below).


For mountaineers these mountains have are most popular in winter time since they are perfect for tour skiing. If snow conditions permit a week's holiday in either the valley of Villgraten or Gsies between January and March can be recommended warmly. Overview Map of the Hohe Tauern Range
To the north the group borders on the groups of Rieserferner, Venediger and Schober of Hohe Tauern, to the south – beyond the Pustertal Valley - there are the (Sexten/Sesto) Dolomites, the Carnic Alps and the Gailttal Alps (with the subgroup of the Lienz Dolomites).

The main ridge of the Villgraten Group runs in west-easterly direction, starting at Stallersattel in the west and ending at Hochstein near the city of Lienz. It is a long ridge, which at first follows the Italian – Austrian border. There are several long side ridges to the south which – except for one ridge are considered as separate subgroups here. The side ridges to the north are rather short, often consisting of not more than 2 or 3 summits, so that these north ridges are treated in unison with the main ridge. Overview Map of the Villgraten Group
The subdivision of the group will be defined as follows:

All the passes will be denoted in GREEN!

The main ridge of the Villgraten Group runs in west-easterly direction, starting at Stallersattel in the west and ending at Hochstein near the city of Lienz. There are quite many important passes and since the main ridge is so long I divided it in two parts right in its middle at Villgrater Joch Pass. The western part shows a small number of short northern side ridges. Most of the refuges which are listed below can be found here. The westernmost part of the main ridge runs along the Italian – Austrian border so that most of the mountain have double names here. 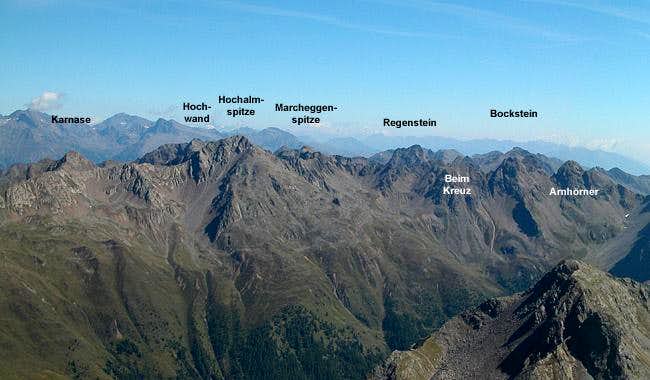 The eastern part of the main ridge starts off with the impressive peaks of Regenstein and Bockstein but then gets gradually lower and lower. The last (easternmost mountain, Hochstein, barely tops 2000m. It is, however, one of the most popular downhill skiing destinations within the Villgraten Range (see below). This listing of the main ridge includes several northern side ridges as well as a southern one. The latter is rather large in terms of covered area but contains only two summits. 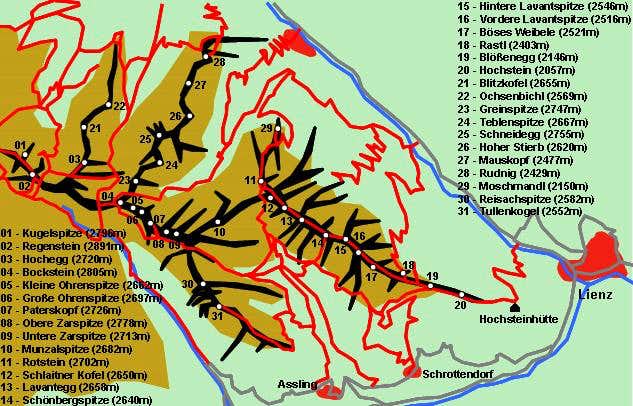 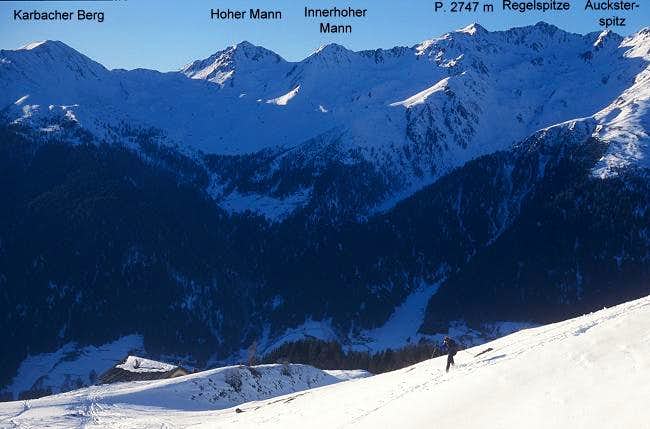 This is the westernmost of the important southern side ridges of the Villgraten Group. It separates the Antholz Valley (Valle di Anterselva) from the Gsies Valley (Valle di Casies). The whole ridge is located on Italian territory so that many of the mountains carry two names. In the following listing I have used both names wherever I could find them. The maps use only the original German names. Actually one can speak of two side ridges here, both starting from Hinterbergkofll on the main ridge. The eastern of the two ridges, however, is very short so that both are discussed in conjunction.The highest and most important mountain of the ridge is Rote Wand, which can be reached via four different routes. The most popular one starts at Stallersattel and ascends for more than 800m. 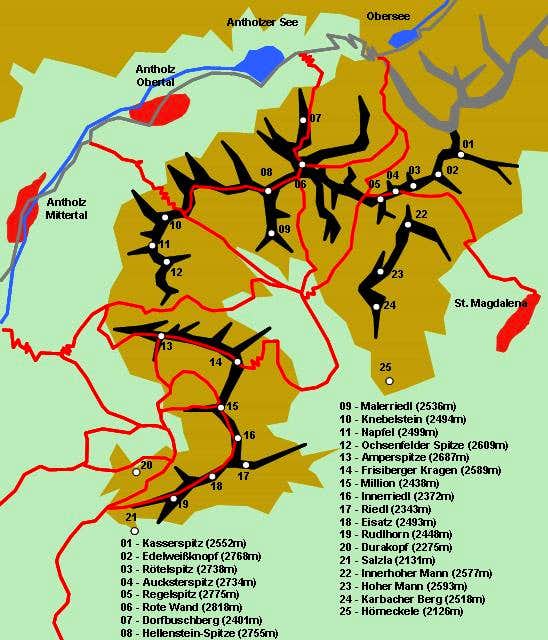 Touristically this is probably the most important of the side ridges in the Villgraten Group. Definitely it is the longest. It starts at Pfoisattel, (where the main ridge leaves the Austrian – Italian border) and follows the border almost to its end. The main ridge is S-shaped and there are several secondary side ridges which will be included at the end of this listing. The highest summit, Riepenspitze, can be found in the vicinity of the main ridge while the most important ones are Hochstein, Hochhorn and Toblacher Pfannhorn, all perfect lookout peaks which are located a little west of the ridge. As for the names the summits on the border as well as on its Italian side have two names (in both languages) whereas the ones on the Austrian side only carry German names. 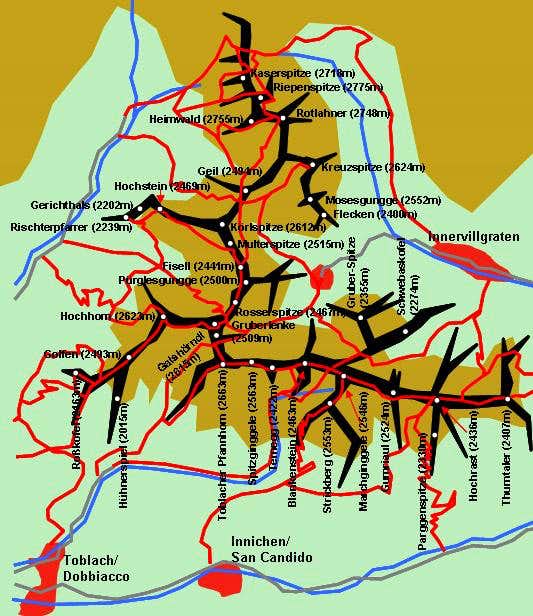 The Hochgrabe Group, which is located south of the Villgraten Main Ridge in its highest part, is a little more complex than the other groups of the range. It is composed by three separate ridges which are connected across deep passes. The group is small and is located between the Villgraten and Winkeltal Valleys. Both valleys can be used as trailheads for the ascents of the mountains in this group. 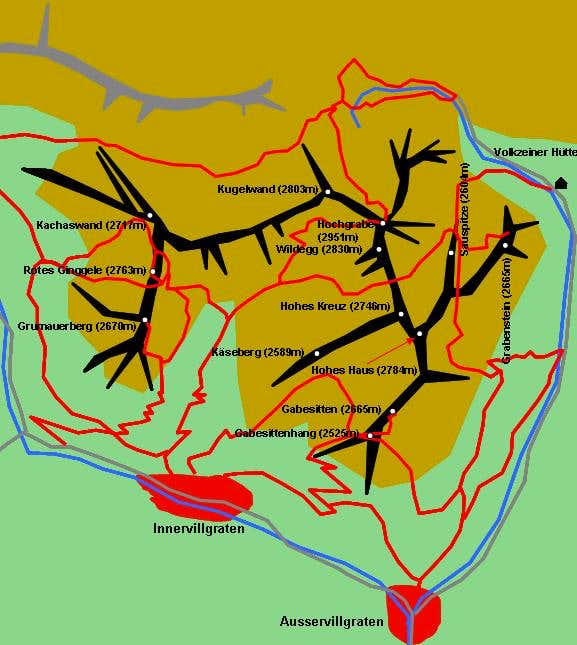 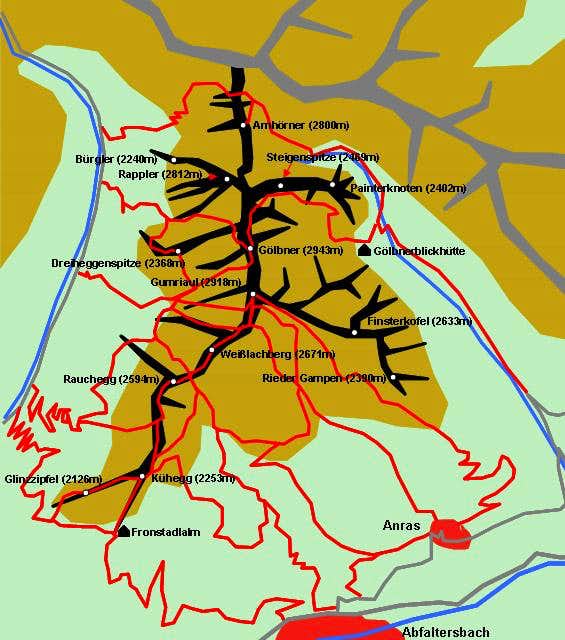 The Gölbner- Gumriaul Subgroup is wedged between the Winkeltal and Kristeinertal Valleys. It consists of a single ridge which splits at Gumriaul into two equally long sub-ridges. Lots of hiking trails cut through the subgroup, the popularity of which can be explained by easy access and by the great number of beautiful alpine lakes. Due to its southern location in the Villgraten Range the sumits command gorgeous views of the whole Dolomites.

Besides the mountains this area is famous for its alpine pastures, which surround many small and very picturesque villages. In summer it is possible to rent small cabins for a holiday vacation in the heart of nature.
Link: www.innervillgraten.info

There are three regions of cablecar skiing at the periphery of the Villgraten Group
Cross-country skiing is popular in the Gsies Valley with a big competition each February .

The sport centre of Antholz / Anterselva is a world class location for the olympic sport of Biathlon, with a world cup event each January.

Ski Touring
For mountaineers ski touring (or snow shoeing) is the main option here. Recommendations for ski tours are almost endless. As there are no huts they have to be planned as daytrips from the valleys. Some possibilities are:

Hiking
This is a mountain group for daytrips, for visiting pastures, lakes and easy summits.
Long-distance hiking trips are not that possible as elsewhere because there are no guided huts – except Volkzeiner hut – in the group. Doing a traverse with fine lodging in the valleys surely is an option - and for the hardcore hikers: why not use your bivuoac gear?

Camping is not restricted in the group. Just be sure to camp out high enough. Most of the lower slopes (below 2200 - 2300m) are used and belong to local farmers. If you want to camp that low, pay a call to them and they certainly will let you stay on their land.

Western Approach
Take the Brenner / Brennero Motorway A22 from Innsbruck (north) or Verona (south). At Brixen / Bressanone turn onto SS49 into Pustertal / Val Pusteria. Depending on your preferred location turn north at Olang / Valdaora, Welsberg / Monguelfo or Sillian. At the Austrian - Italian border the road turns into B100. Here Anras, Assling and Lienz are reasonable trailheads for the group.

Southern Approach
Take motorway A27 from Venezia north to Belluno. At the end of the motorway take SS51 north to Cortina d'Ampezzo an on to Toblach/Dobbiaco. Here you are already in Pustertal Valley.

Listed here are the refuges as well as the alms and farms where you can get food and lodging.

There is no red tape to be found in the group.

Villgraten Group is located on the south side of the Alpine Main Ridge. In general this means that the weather is better than in the north of the main ridge. In winter the avalanche danger rating often is lower than in the northern or central parts of Tyrol. On the other hand it is possible that until January there is not enough snow for tour skiing.
Weather Reports and Livecams:

Maps
I always use the maps by Kompass Verlag. They are scaled 1:50000 and show all the necessary informations. However, the Villgraten Group is located directly at the intersection of five of the maps, which is why it took me so long to prepare the schematic maps posted here.
Books
Excellent hiking books are (German and Italian)