First Mountain is the highest point on Pebble Island, the largest of the off-shore islands to the north of West Falkland Island which is itself the second largest island out of more than 750 in the south Atlantic archipelago of the British protectorate of the Falkland Islands.

At 277 metres a trip up First Mountain isn’t going to tax anyone overly. The attraction is in a lovely 2 km long ridge up to the summit which offers uninterrupted all-round views during the walk all topped off by a real jaw-dropper to the west when you finally get there. The western half of the island lies at your feet with Middle and Marble Mountains prominent. In the middle distance is Keppel Island and in the far distance, 40-50 km away, the distinctive shapes of Rookery Mountain, Mt Richards and Mt Harston on Saunders Island are easily recognizable.

All told it’s about a 12 km trip to the summit of First and back to the Pebble Island settlement and makes a great half day out.

Like most Falkland mountains, First encompasses lower slopes of barren heathland below the quartzite summit ridge. Unusually for the Falklands, there’s actually a bit of a path to follow along the summit ridge.

Onward travel to Pebble Island is by air on the Falkland Islands Government Air Service to the grass airstrip northwest of the settlement. Elephant Beach on the north coast of the island east of the settlement provides a landing alternate when the grass strip is waterlogged or otherwise out of service. 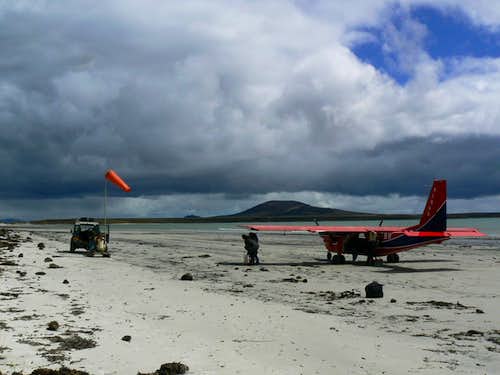 From the settlement walk northwest and along the airstrip for about 1.5 km. Continue northwest beyond the airstrip, across a grassy gully and on towards the mountain aiming for the toe of the obvious ridge ahead at about S51 17.503 W59 38.234. It’s about 3.5 km from the settlement until you’re on the ridge proper. As you get high enough and framed against the sea and sky to the north, you will pick out the large cross above the memorial to those that died during the sinking of HMS Coventry by Argentine aircraft during the war of 1982.

Once on the ridge simply follow the obvious line west and then finally up grassy slopes northwest to the top.

Admire the views described above, try to ignore whatever it is that they’ve built up there and look around carefully for the tiny survey monument right on the summit.

Return the way you came or drop off the ridge at any point to the north or south. You will be able to pick out jeep tracks down there. Choose any one that will take you round to the bottom of the east end of the ridge and back to the settlement.

The mountain can also be climbed from the west after walking west along a bench above the sea and under the south side of the summit ridge and heading back east. Jeep tracks go quite high on this side and it’s a quick trip to the top from the end of the highest of these. This route misses the nice open ridge walk, however.

All land in the Falklands is privately owned. Any activities you undertake on Pebble must be with the permission of the local landowner. Since you’re staying with them, just mention where you want to go and make sure they’re OK with everything.

The settlement on Pebble Island is home to the well appointed and comfortable Pebble Island Lodge. Originally built in 1928 as the farm manager’s house, the lodge was converted for tourist use in 1987. The lodge offers full board to guests.

I don’t know if camping would be allowed on Pebble. Phone ahead and ask first.

Current weather forecast in Stanley. Shouldn’t be too different for Pebble Island.