The Falkland Islands, Other

To the immediate west of the town of Stanley, the capital of the far flung British protectorate of the Falkland Islands in the South Atlantic, is a range of low mountains capped by the wind scoured quartzite ridges and tors so typical of the Islands’ topography.

I had originally thought to offer a page on each of the named summits in the range but, on reflection, thought that this might be a lot of work for limited return. The terrain is trail-less but completely open. All the hiker really needs to access any of the high points is a starting point and subsequently bearings and distance to any objective that beckons. It’s then just a question of marching across country to that objective with available time and weather as the only constraints. Mt Harriet is roughly in the centre of the area and makes an ideal reference point for the purpose of this exercise.

During the 1982 Falklands war the battle for the high ground on Mt Harriet and neighbouring Goat Ridge was pivotal to both British attackers and Argentine defenders as both sought to secure the approaches to Stanley. The battle began on the night of May 30, 1982 but didn’t reach its conclusion until June 11 and, even then, only after several heavy British naval bombardments as well as “softening up” ground attacks. Accounts of the battle written by both sides belie the commonly held opinion that the Argentine conscripts were no match for the professional British forces opposing them. For nearly 2 weeks they held their positions on Mt Harriet and fought bravely. In the end they were undone because they expected the British assault to come from the west. In fact the British walked through a defensive minefield around under the height of land and made their eventually successful attack from the east. 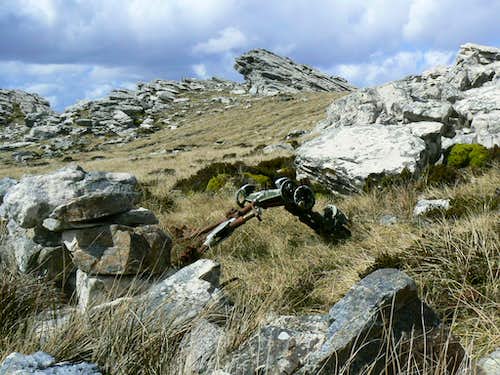 The remains of an Argentine post on Mt Harriet
Like all mountains in the immediate area and, for that matter, in the Falklands in general, Harriet offers lower slopes comprising white grass or bog above the usual wind scoured quartzite summit ridge. There are also some nice stone runs on just about every side of Harriet and its neighbours.

If the weather co-operates Harriets’ neighbours: Mts Challenger, Kent, Tumbledown, William, Two Sisters and more will all be in view and the routes across to them evident enough. Views also extend to the ocean to the south and east to downtown Stanley, further to the sheltered harbor known as the “Caneche” and beyond.

Mt Harriet and neighbours can be easily visited as a day trip from Stanley. Car hire is readily available in town and you might also consider a taxi for the relatively short trip to the recommended start point.

From the western outskirts of Stanley drive about 12 km towards the Mt Pleasant airport and look for a large cleared pull out on the right at S51 42.787 W58 02.356. If you pass the turn off to Teal Inlet/Port San Carlos you’ve gone over 2 km too far. There’s plenty of room to leave a vehicle here and return to it. Or consider taking a taxi and walking back to town taking in Harriet and as many other summits as you have time for.


The Route to Mt Harriet and Beyond 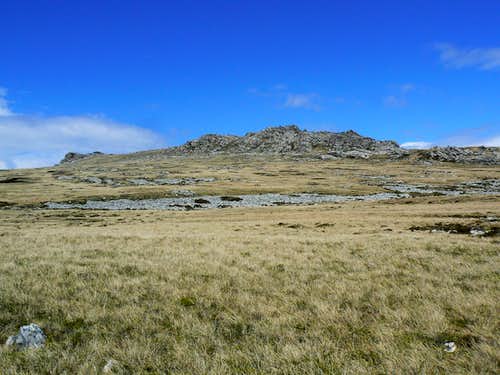 Approaching Mt Harriet from the west
From the pull out referenced above, find a jeep track running roughly NE across “Camp”. Follow the track for about 1 km and then swing east and make your best route up to Harriet’s long summit ridge. There is some boggy ground but it can usually be avoided. Or just squelch through. As you do so, think of the troops who fought over this terrain in the middle of winter!

Once on the summit ridge, there’s lots of scrambling diversion to be found amongst the quartzite pinnacles and just west of the highest point is a memorial to the British soldiers who died here in 1982. 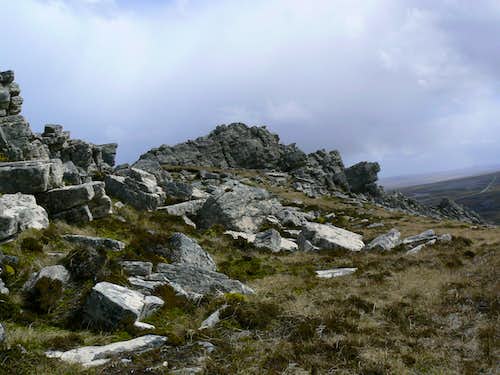 Mt Harriet summit
After you’ve bagged Harriet head east, west or north to the neighbouring high points as summarized in the following table.

All land in the Falklands is privately owned. Any activities you undertake must be with the permission of the local landowner. Check with whoever you’re staying with in Stanley regarding access permission.

It goes without saying that photographing any of the military installations around the islands is strictly forbidden. In case anyone is foolish enough to consider otherwise, entering a marked minefield is illegal and, if you survive, carries a heavy fine!

In Stanley you will find the whole range of accommodation options from comfortable hotels to well appointed B & B’s.

Use this Falklands Tourist Board link.