On USGS topo maps, Turtle Rock is the whole "massif" that is the centerpiece of Central Vedauwoo, and it makes sense that the trail circumnavigating it is called Turtle Rock Trail.
However, climbers recognize several of the crags of this complex by individual names, which adds some flavor to the area but, more importantly, helps with the sorting of routes.
Friction Tower is the second major formation on the right as one hikes up Box Canyon; this dome-like formation is obviously smaller and lower than its immediate neighbor (and first formation on the right), Old Easy.
If you're going to climb at Vedauwoo, you should get Heel and Toe: The Climbs of Greater Vedauwoo, by Skip Harper and Rob Kelman. The Mountain Project page for Vedauwoo is free to use and has a lot of information, but unless you already know Vedauwoo or know exactly what you're looking for, it's hard to navigate. But the book, with all its photos and diagrams, really helps make sense of the area.
Another good source of information on the area is Vedauwoo.org. Also, try the Forest Service site, though it's not good for climbing information.
Vedauwoo is famed for its off-width cracks (and larger than that) and its rough granite. Just about any source on the area that you find will warn you to use tape or be prepared to bleed if you are doing technical climbs. Quite often, people recommend kneepads and/or long pants and sleeves as well.
Please add route pages or detailed information about the climbing routes on this peak! 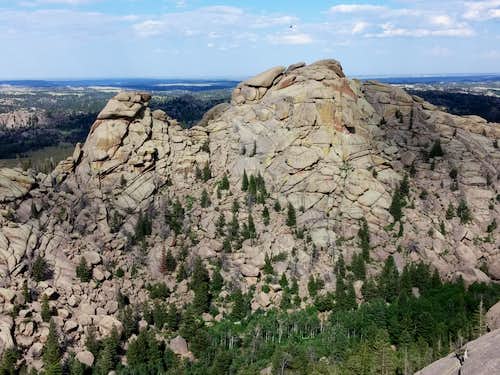 From I-80 between Laramie and Cheyenne, leave the highway at Exit 329, marked for Vedauwoo. This is about 16 miles from Laramie. Take Vedauwoo Road east and drive 1.2 miles before turning left onto a well-signed road for the Vedauwoo Recreation Area. Stop at the self-pay station and then proceed. Signs point you to the campground, picnic areas, and trailheads. The best trailhead to use for accessing the crags is Box Canyon.
Vedauwoo Road is usually clear of snow by May and sometimes as early as April. 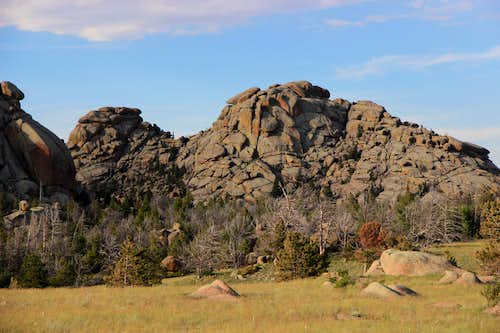 Friction Tower and Old Easy from the access road

Head up the Box Canyon Trail. At a bridge, leave the trail and scramble up to the saddle between Friction Tower and Turtle Rock (the formation to the left). Work to the base of the north face.
You can also get to Friction Tower from Old Easy via a Class 4 scramble. 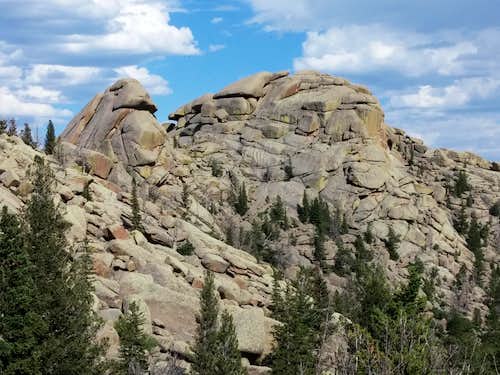 The developed routes on Friction Tower exist on the north face, known as the Crystal Freeway. This feature gets it name from a large granite slab that is loaded with feldspar crystals. These crystals make fine holds on face routes but can shred climbers in cracks. 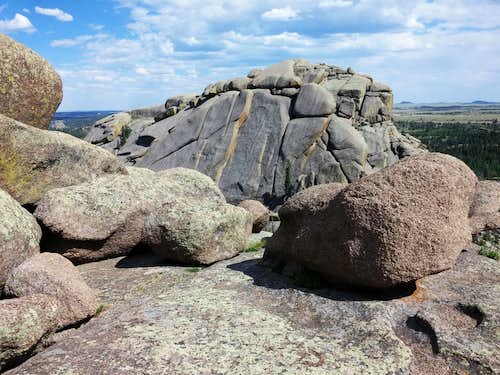 Friction Tower with Crystal Freeway from Turtle Rock
My edition of the Harper-Kelman guide, which is a 1998 printing, covers 13 routes on the Crystal Freeway, most of them trad routes. Difficulty levels range from 5.2 to 5.11b.
As of this page's creation date, the MP page for Crystal Freeway had 8 routes listed and described; all were trad, and one was also a sport route while another was also a toprope route. 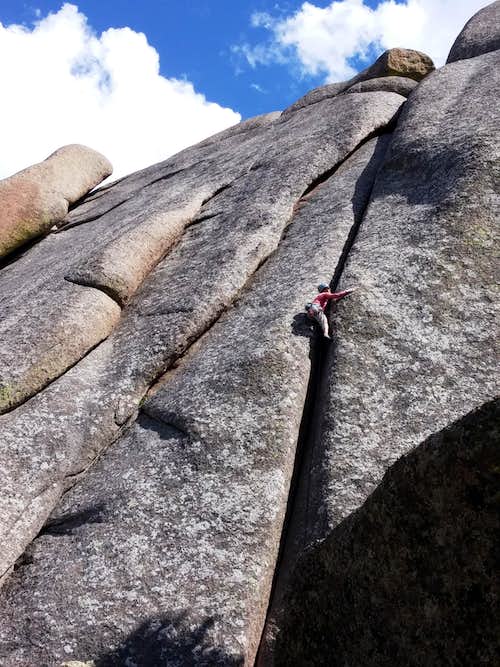 Climb to the Summit

From the base of the north face, route-find your way up from the northeast. It's hard to explain exactly what to do, and I don't have pictures to illustrate, but patience and solid scrambling skills will get you there.
The first of two Class 5 sections involves a steep, unprotectable slab. Arguably, this is Class 4, though I felt it tipped into easy Class 5 territory. Near the top of the slab are some bolts you can use to rappel back down; I found a 30m rope to be sufficient, but you will want 60m to get back to the easiest ground, as I had to negotiate some Class 4 terrain after the rappel.
The second Class 5 section involves the summit block. Either climb straight up (no protection, 5.5 or so) or go around and through a slot on the left side and chimney or stem up, finishing with a short but exposed move to reach easier ground a few feet from the highpoint. I did the latter simply because I feel more confident in that style of climbing than I do on face climbs. I would call this variation 5.4-5.5.
Views from the top are expansive, taking in Greater Vedauwoo and the surrounding plains.
Elevation gain is around 300'; one-way distance is less than a mile. 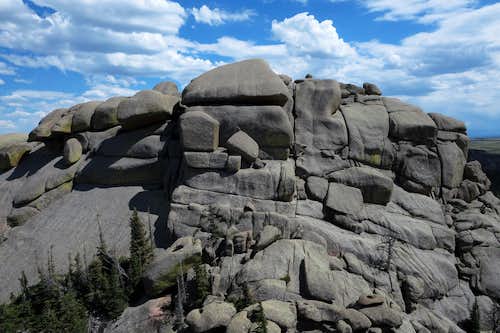 There is a 28-site campground in the recreation area. It is first-come, first-served and fills quickly on weekends in good weather. Vault toilets and drinking water are available, though in July 2014 the water wasn't flowing or I was just at the wrong pump. The camping fee was $10 per night in July 2014. Closed during the winter, the campground is usually open by the beginning of June.
There is a lot of dispersed camping available nearby, with some restrictions (for example, postings prohibit camping too close to the turnoff for the recreation area.