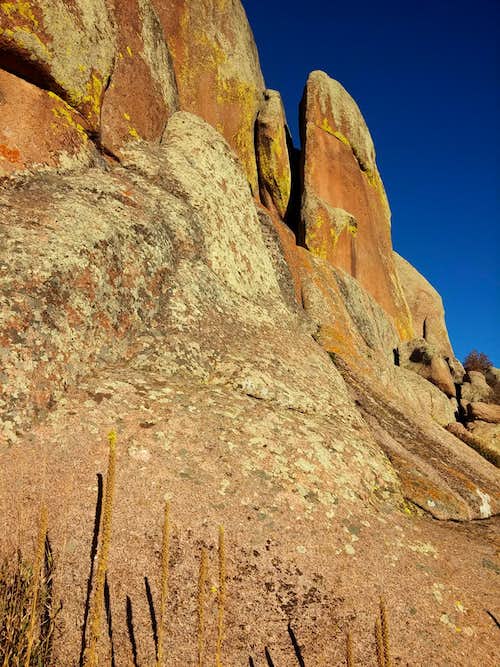 French Tickler (11c) and Petit Crapon (5.8+)
Although not considered a part of Central Vedauwoo, Poland Hill might be the first major crag one sees after exiting the interstate to make the short drive into Central Vedauwoo and the Vedauwoo Recreation Area.
Poland Hill consists of two main crags, the more distinctive of which is today called the Rat Brain. On the Rat Brain are a couple area trad classics, Kim and Fantasia.
In the mid-1800s, this area was called Skull Rocks. Later, people called it the Sentinel.
In spite of being so easily seen from the road, Poland Hill has a "wilderness" feel that the crags of Central Vedauwoo largely lack. The latter crags often involve approaches of just a few minutes' time, but getting to Poland Hill requires driving a somewhat-rough dirt road and then hiking nearly a mile. No, that's not exactly a remote destination, but it feels that way in comparison to the most popular spots at Vedauwoo
Heel and Toe by Rob Kelman and Skip Harper has a lot of great information, including photos and diagrams, on Poland Hill. The Mountain Project page has good route information but isn't organized all that well. Your best online resource is probably the Vedauwoo.org Poland Hill page, which divides the crag into four sections and then has pictures, diagrams, and descriptions of the routes. While I find the organization style a little confusing (some routes are shown on more than one page, and the page subdivisions seem more about what one sees from certain directions than they are about distinct sections), it works.
Also, try the Forest Service site. Though it's not good for climbing information, it's decent for general information.

Even if you aren't a climber, Poland Hill is worth a visit just to get away from the crowds and hike and scramble around on the beautiful rock there. 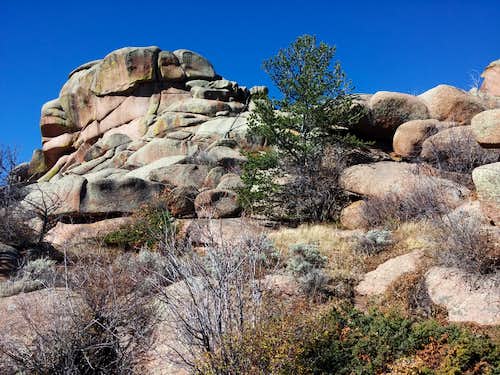 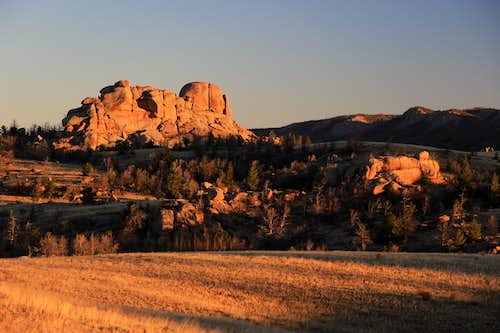 Poland Hill, with the Rat Brain, at Dawn
From I-80 between Laramie and Cheyenne, leave the highway at Exit 329, marked for Vedauwoo. This is about 16 miles from Laramie. Take Vedauwoo Road east. After crossing a cattle guard, turn left onto a dirt road and drive (2 miles at most) to its end.
The road can be rough. High clearance is helpful.
Vedauwoo Road is usually clear of snow by May and sometimes as early as April.
After parking, follow a use trail downhill toward a stream and beaver ponds. Unless the water is unusually high, it should be easy to cross and keep your feet dry. Then follow the trail to the crag. It takes about 15 minutes to get there. 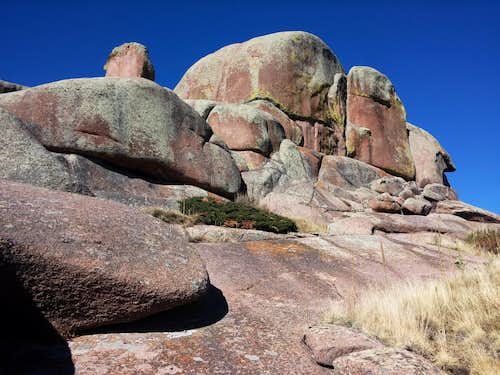 Poland Hill has a number of trad, sport, and toprope routes ranging from 5.4 to 5.12b. There are bouldering problems from V2 to V12. This page will not simply copy what is already on the linked sources; please go to them for more information. Instead, this page will recommend on a few classics and comment on some other routes I have gotten on.
From what I have gleaned from other sources, there are at least three area classics:
In addition to Kim, I got on these as well:

May through October typically.

There is a 28-site campground in the recreation area. It is first-come, first-served and fills quickly on weekends in good weather. Vault toilets and drinking water are available, though in July 2014 the water wasn't flowing or I was just at the wrong pump. The camping fee was $10 per night in July 2014. Closed during the winter, the campground is usually open by the beginning of June.
However, you can camp free of charge at the end of the dirt road that approaches Poland Hill. Also, you could backpack in and camp right at the base, though that really only saves 15-20 minutes each way and means hauling more gear.