The Tour Ronde 3792 m is a famous mountain belonging to the Mont Blanc massif and located on the Italy-France border, along the ridge between Colle del Gigante and Mont Maudit. Being the highest peak along this ridge it offers a truly magnificent panorama on the majestic mountains that surround it, as the Monte Bianco with the Brenva wall, Mont Maudit, Mont Blanc du Tacul, the granite peaks overlooking the Valleé Blanche, the Dent du Geant with Rochefort and the Grandes Jorasses and many others.

For this reason, the quick access from the nearby Rifugio Torino and the presence of an interesting  Normal route with low difficulties, the Tour Ronde is a popular mountain. A more difficult and advisable alternative to climb the mountain is the Couloir Gervasutti, a beautiful ice gully located on the West side of the mountain.

The Tour Ronde is conveniently reachable from Courmayeur on the italian side of the massif. It can even be climbed starting in the morning with the first cable car ride,  but for a correct acclimatization is advisable to stay overnight at the shelter, the Rifugio Torino.

From Courmayeur to Rifugio Torino

The Couloir Gervasutti is a fine and interesting ice-climb,  a good alternative if the North face is too crowded or in bad condition. This route facing West is much more enclosed than the North Face and often in better condition.

The starting point to climb is the Rifugio Torino. The approach from the Rifugio Torino is the same as for the North Face but goes further. The Gervasutti couloir is situated on the West side of the mountain and it is a good alternative if the North face is too crowded.  From the Rifugio Torino (or Punta Helbronner) reach the Col des Flambeaux 3407 m, descend westward (left) to an altitude of approximately 3230 m, passing under the North side of the Aiguille des Toules. then circle the North face of the Tour Ronde and climb up below the West face, going beyond some ice gullies to reach the snow slope leading to the start of the Gervasutti Couloir,  running regularly through the West wall.

After passing the bergschrund (50°), climb up the ice gully.  The route is 300 metres high and has a steepness of 45° to 55°. It takes about 3-4 hours for the ascent.  At the end of the gully you will exit on the NW shoulder. Downclimb a few meters and traverse left (II) reaching the base of the summit rocky castle, which you can climb up along an obvious chimney (IV) of beautiful rock with the aid of a fixed rope (2 pitches to the summit). Alternatively, if you go around a few meters after the chimney, walking in a clockwise direction on the snow at the base of the summit castle you can reach the SE ridge, leading  easily to the summit (II). 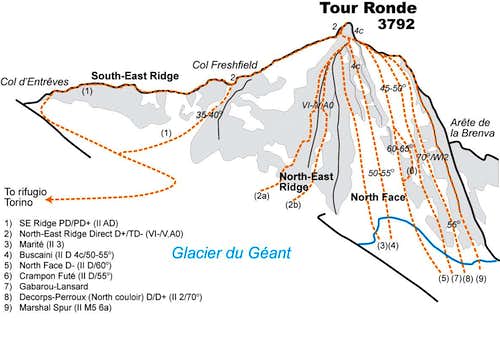 Descent: the descent along the Normal route on the South-East ridge is rather long. See the report on Summitpost: South-East Ridge (normal route).  Easier and faster, there are other two possibilities: the descent on the adjacent East slope or the descent on the steep but short gully that descends from the Col Freshfield (topo here on the left). Both are generally to be preferred if in good condition (only with low temperatures and good snow), otherwise it is better to follow the Normal route on the ridge.

The best season is the Spring.