Overview - the highest peak of Kosovo?

Great Rudoka (Velika Rudoka in Macedonian, Maja e Njeriut in Albanian) is a small summit in the Sar Planina mountains, right on the border of Macedonia and Kosovo (whether or not you count it to Serbia). It's not a very famous summit, but after the splitting of Yugoslavia it became the highest (?) or maybe second highest summit of the Republic of Kosovo (respectively of the Republic of Serbia). The altitude of this summit is stated with 2.658m, which would be 2 meters higher than Geravica. Though, since the altitude of these two summits is almost the same and probably nobody made exact measurements, it might take some more time before you know, which summit is really the highest of Kosovo (Serbia).

It seems like nobody cared about this summit before Kosovo split up. The reason might be that it was disputed whether the border runs over the summit. By now there's a border stone on the summit, showing "RK" (Republic of Kosovo). 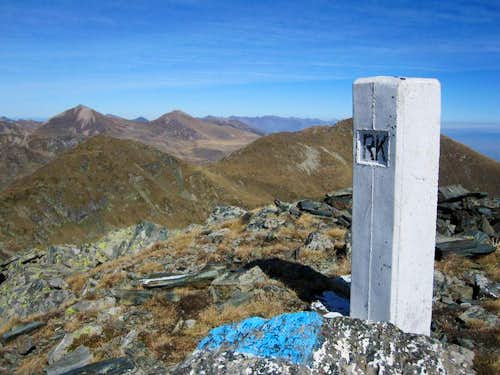 border stone on the summit


Prominence is about 200 Meters (Borislavec, 2675m, completely on Macedonian territory).

From Macedonian side: Go to Tetovo (30 Minutes west of Skopje), then south to the Albanian villages on the foot of Sar Planina. Here things get tricky: From the village of Senokos, still in the very valley, there's a paved road going up the mountain. Though, after few kilometers (about here:  41.891072, 20.876893) the road becomes a dirt military road and gets very bad. Without a good jeep you'll not come very far. If you have a good jeep, you can go very far, up to about 1.700 meters (google maps: appr. 41.917926,20.842524). Certainly you can start the walk from somewhere lower and have some longer walk. 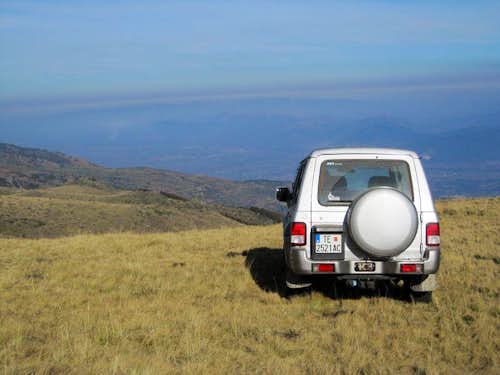 jeep at the starting point, high above the Vardar valley

If somebody knows the way from the Kosovarian side, feel free to add it.

Whereever you start, you should head first for the Black Lake (Crno Ezero). The terrain beneath the lake is kind of steep, but grassy. So given that it's not wet or snow covered, fairly easy. At the lake you can see Rudoka on the left side. 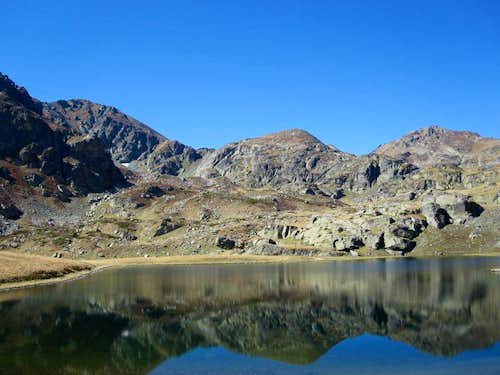 Continue in western direction around the lake to the broad saddle between Rudoka (left) and Borislavec (right). There are even some red spots. From the saddle you can see the summit of Rudoka and you just walk up the easy grassy slopes up to the highest point. 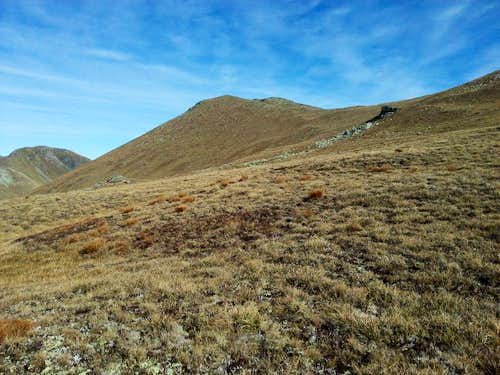 slopes beneath the summit

The landscape is very remote and idyllic, so it's a nice hike, whether or not you're on the top of Kosovo/Serbia.

If the air is clear, you have fantastic views from the summit: in the east: Vardar valley below you, behind basically all Macedonian mountains, in the north: Sar Planina with Titov vrv, in the west: southern Kosovarian mountains and Prokletje (Albania/Montenegro) in the back and in the south Golem Korab. 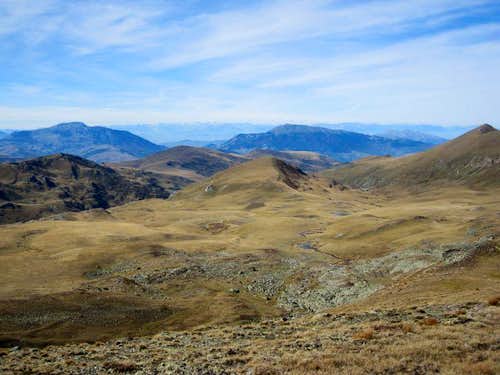 Time for ascent: 2.5-3 hours from the highest place reachable by jeep, probably at least 6 hours from the Vardar valley (and anything in between if you start half way).

No red tape. But take care of sheep dogs, they can be aggressive. 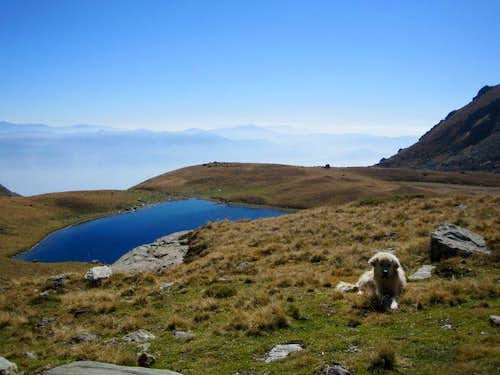 Summer and autumn is certainly the best. In winter you might have problems with avalanches and to get to a high starting point, though the terrain is for sure great for skiing.

Since there are bears, wolves and sheep dogs around, I don't know whether this is the perfect place for camping.

I don't know of any hiking map of this area, but from google maps you can get all information you need.