To take a trip to the mountains of Macedonia is like taking a trip to the most beautiful and the most valuable essence contained in the Mountains of the World excluding extremity, as a feature which is aesthetically destructive and would crush the sublime code of harmony. The northwest chain of Macedonia incorporates the ring of one of the most complete and most harmonious mountains in the world: Sar Mountain!

Any significant quality attributable to the world mountains could definitely be ascribe to Sar Mountain too! Toppointed, vertiginously steep rocks, on the threshold of horror, rise high in the blue sky, resembling the Alps, the Andes, the Pamirs, or the Himalayas. Unlike these gigantic ridges, however, Sar Mountain never steps over the borderline which, as its hallmark, makes Macedonia so recognizable: nothing steps over the human dimension.

The flowery meadows like galaxies made up of "crumbs of the starry gold" as Trakl would put it are as beautiful as mountain meadows could possibly be. Since this is a matter of beauty, the "human dimension " is even intensified. The formula of Sar Mountain is such that one receives "less from the horror, and more from the beauty and the excitement! " A mountain itself, as it is, cannot do without a certain amount of horror and danger; nevertheless, that amount has here been reduced to the point required to keep us aware of our being on a magnificent, grand and indomitable mountain. As for the beauty of Sar Mountain, it has been brought down to the opposite level: as much as the human soul can possibly take!

What it in fact means is that the pasture grounds along with the already mentioned galactic wreath of flowers are larger than anywhere else in Europe! According to leading European encyclopedias, the compact grassy area on Shara Mountain is unrivaled to any mountain range in Europe. This fact has only been implicitly rendered so far. Facts about other mountains have not been compiled in a final comparative project. Still, the implicit in this case becomes explicit for the sake of praising the harmony of this mountain. 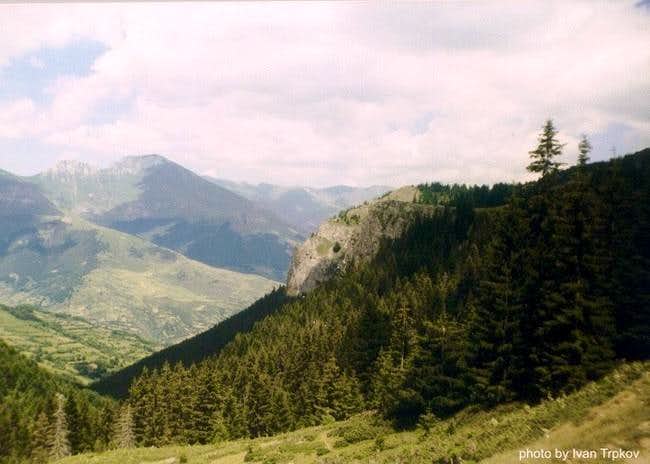 The Shar Planina massif is located between the Gostivar and Tetovo valleys in the south-east, the Mavrovo Lake on the south, the Korab massif in the west. From here, with a small part, the massif enters the Albanian territory, while its northern and north-western parts lie on the territory of Serbia and Montenegro (province of Kosovo). It stretches on a surface of 1600km, 56.25% of the massif is located in Macedonia, 43.12% in Serbia and Montenegro, and 0.63% in Albania.

Mount Shara is the largest mountain in Macedonia - it is 80 km long and around 30 km wide. Its pastures, peaks, valleys, forests, and rivers are immense. Shar planina is a mountain with glacial relief, beautiful forests, streams and rivers. The mountain has very interesting vegetation that includes crops up to around 1000 meters, forests up to 1700 meters, and above that lie high pastures which encompass around 550 square kilometers.

High quality dairy products, mainly cheese and feta cheese, are made in the many sheepfolds on Shar and the adjacent mountains.

The mountain has been formed in the Tertiary period. The most upper parts of the mountain had been frozen with large amounts of ice and snow.

The mountain borders extends from the Kosovo's city of
Prizren, following the Lepenec river, the city of Kachanik, passes the Serbia-Montenegro/Macedonia border, the canyon of Derven and forms the waste Polog valley. The border passes near the Vardar spring called Vrutok and goes near the valley of Mavrovo. There the Radika river separate the two highest Macedonian mountains: Shar planina and Korab. After that, the border is mounting, reaching the point of junction of three state borders: Macedonian, Serbia-Montenegro and Albanian. The border now follows the road to the Kosovo's small town of Restelica, the river of Globocica, Plavska river, river of Bel Drim and reaches again the city of Prizren. 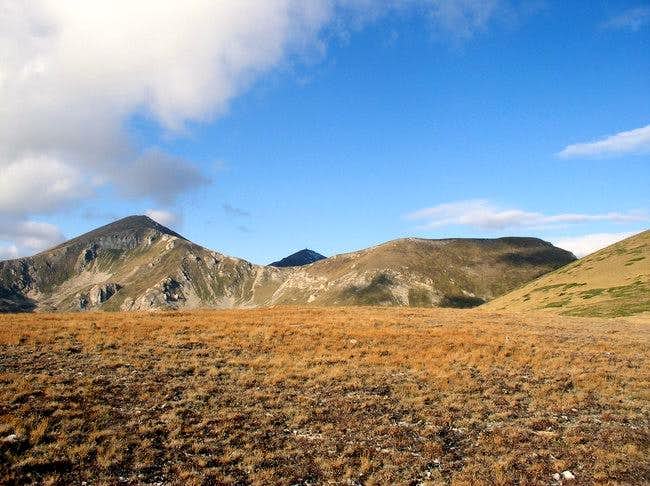 The mountain has as many as 43 peaks higher than 2500 meters above the sea level. An interesting fact is that if starting the travel through the Shar planina mountain from the domineering and magnificent Ljuboten peak, it can be accomplished without going down below 2,000 m of altitude all the way to the Korab mountain for at least 80 km!

The most important mountain peaks are:


The mountain highest part begins with the peak of Ljuboten (2499 m) which stands isolated of the main mountain massif in the north east direction. This peak is maybe the most beautiful of the Shara peaks. The following peaks in the south-west direction are Livadica (2491 m) and Piribeg (2522 m).

The next important peak is Crn vrv (2584 m). All these peaks are making the Macedonia/Serbia-Montenegro border. Near the Crni vrv peak are the Kobilica peaks (the highest one has 2526 m), creating one of the most beautiful landscapes of the mountain. The mountain continues with the peak of Kara Nikola (2408 m). Two beautiful glacier lakes are situated near the peak. Following are the peaks of Skakalac (2494 m), Klech (2312 m), Strikule (2360 m) and Dzini beg, which is situated at 2650 meters above the sea.

At this point the Rudoka fraction leaves the main mountain direction and goes in the north-east direction rising in the Shara's highest peaks of Titov vrv (2748 m), Turchin (2702 m) and Bakrdan (2700 m). This fraction finishes with the peak of Ceripashina (2525 m), forming the beautiful valley of Leshnica.

From the Titov vrv peak, one extremely beautiful part of the mountain with vertical rocks stands above the valley of Leshnica.

Following the Dzini beg peak is the Durmion peak (2542 m), where a different mountain separation reaches the peak of Borislaec (2675 m).

Twenty seven of the total of 39 mountain glacier lakes lie on the Macedonian side of the border.

The biggest glacier lake on the mountain is the Bogovinsko lake, situated near the Borislaec peak, on the 1960 meters above the sea. It is long 452 m and wide 225 m, with a depth of 2.2 m.

On the Serbian (Kosovo's) side of the mountain, the most important lakes are: Livadicko (2173 m) near the peak of Livadica, Jazinachko lake (2180 m) near the Ezerska chuka peak, Big lake (2400 m) near the Bistrica peak etc.

The most important mountain waterfall is is situated on the Belovishka reka (43 meters high).
The waterfall of Leshnica (25 m) is situated near the peak of Titov vrv.

The Sharplaninec has the honor of being recognized by both the Macedonian and the Yugoslav kennel clubs. Thought to be older than the Istrian Shepherd (although not as old a breed as the Greek Shepherd Dog or the Turkish Akbash), this reserved guardian exists in sustainable numbers in Serbia and Montenegro and Macedonia. It was first recognized as a distinct breed in 1930. Since 1975 successful exports have been carried out to the United States and Canada to control coyotes, and this is where its future security rests. It is now gaining recognition as a hard-working, readily able flock guard in those countries. Numerous in its homeland, the Sharplaninec is still part of the great flock. It is versatile and occasionally works cattle or serves as guard.

The most popular winter ski resort in the Macedonia - Popova Shapka is located on Mount Shara on the Macedonian side on the 1780 meters above sea level, on 35 kilometters from the capital Skopje. Popova Shapka offers excellent ski environment and hotel accommodations.

Visitors not only from Macedonia, but also from many other countries, return season after season here to relax, have fun, and experience adventure. Popova Shapka has been a host to both the European and Balkan Ski Championships.
There are two ways to get to Popova Shapka: by car and by rope-railway with a starting location in Tetovo. The rope-railway is 6km long and it takes about 36 minutes to reach the top. 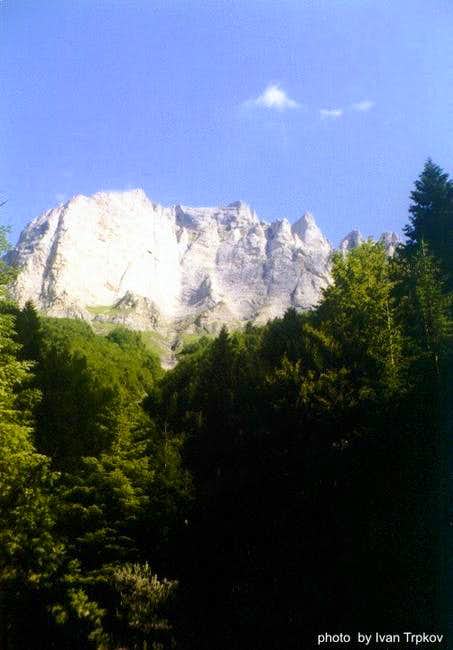 Rocks above the Leshnica valley

The old Jelak mountain hut was located at 1 hour walk distance from Popova Shapka, on a magnificent mountain slope covered with green meadows and fir forest. From there one can experience beautiful views to the summits of Mala and Golema Kobilica (2,526 m).

Carrying on along the track that leads from Jelak mountain hut, within three hours you will arrive at one of the most beautiful spots in Mount Shara: the valley of Leshnica. It is difficult to find words that would describe the magnificence of the high peaks that rise above this marvellous place, the whisper of the ancient fir and pine forests, and the rippling of the unbelievably pristine waters of the Pena river's springs. This site is simply a must for all visitors if they are apt to experience the magnificence and generosity of the Leshnica environment

The most frequently used approaches on the Macedonian side are: via Tetovo and the Popova Shapka ski-centre or via the village Vratnica.

From the Serbia-Montenegro Kosovo side the most common approaches are from the city of Prizren and Restelica. There are many alternative approaches as well.

The capital city of Macedonia, Skopje, is located in the distance of 35 kilometers, and the foreign turists can use the Skopje's airport. A new highway connects the capital with the city of Tetovo. Once there, the tourist can use an asphalt road that leads to the Popova Shapka skiing centre, there are also taxi transportation and ski-lift during the winter. Because this mountain stretches across the Macedonia/Serbia-Montenegro border line, there is a need of special permit in order to visit the bordering peaks that can be obtained from the Ministry of interior. Othervise, there are no summit fees, nor a parking pass or fees.

However, it is strongly recommended to contact the Ministry of interior before going to the some of the regions of the mountain that has been affected by the clashes in the 2001. The mountain is mostly safe now, but there is still a need for precaution.

The visitor can utilize the opportunity to climb the mountain during the organized climbings that occurs every year, when no special permits are required.

The best time to climb the mountain is from may through the september. There is a lot of snow during the winter.

Each year several organized climbings took place on the mountain.However, the tourist interested to join these climbings should get an information whether the event will be organized for sure. The most important ones are:

2 august - visit of the Leshnica valley

• Smreka mountain hut - located in the Popova Shapka winter resort, probably the most comfortable hut in the mountain

• Ljuboten mountain hut (1623 m) near the peak of Ljuboten. - around 30 beds, a kitchen, more information can be obtained in the village of Vratnica.

• Tri vodi mountain hut, near the village of Tearce.

• Sharski vodi mountain hut , near the village of Gorno Jelovce The security issue seems a bit ambigous; the border police asured me that everything was fine but at the same time heavily armed police officers were patrolling which doesn't quite make sense. What is certain is that mine fields are (or were) present on Šar in the area of Kobilica so perhaps it might be wise to be a little cautious.