On November 1st 2010 occured on Havran a tragic accident. Zofia Cybulska, vice-president of the mountaineering club of Zakopane, well-known locally, made a bad step on slippery snow-covered grass and found the death as a result of this fall.
Of course we can notice that not less than two rules were broken since Havran stands off marked trails, and from this very day begins the winter closure of the Slovak Tatras.
But above all we can underline that Havran, despite its allure of friendly mountain, isn't easier in any case for this reason, and shouldn't be considered as a peak of secondary order just judging by its relatively "medium" height. from Medodoly
Havran (Hawrań in Polish), means "raven" in Slovak (which is "kruk" in Polish). Few others also evoke something connected with a horse, Havran being also an homonym of this in Slovak, but the German name (Rabenstein) tends to confirm the etymology as "raven's peak". In Hungarian, the name is Holló-kő.

It is the highest of the "White Tatras" (Belianské Tatry), the easternmost group of the Eastern Tatras, often considered as a distinct group by geographers, since significantly distant from the rest and made of limestone and dolomite.

From this fact, it is the highest limestone peak in the Tatras, and in the whole of the Carpathians except for Romania's share.

Havran has a beautiful geometric and sharp pyramidal shape. It is also famous for having an almost identical twin, East just next to it: Ždiarska Vidla (or Plačlivá Skala), just slightly smaller. Together, these twin peaks form a magnificent and famous view, present on many postcards. The "2 brothers" are easily recognizable in the distance from almost all major peaks of the High Tatras, but they are best appreciated as seen from Ždiar or Spišská Magura.

The first ascent, unknown, proabably occured long ago, as the area was always very famous for Chamois hunting. During some time in the 19th century, Havran used to be the private "hunting ground" of Prince Prince Christian of Hohenlohe. From this period remains a surprisingly dense network of little trails, scales and ladders. The former name of the peak, "Panska Vidla", come from this period (The "Lord's fork"). "Vidla", just like for the brother-peak, means "fork", we understand why.

Unfortunately, due to the nature preservation rules (eagles nesting, bears, numerous chamois, fragile vegetation layer), most of the sector is not allowed to hikers, including those owning a club licence. This is possible only with a guide. Which is a pity, since Havran is a proud prominent peak with, for sure, a demanding ascent for experienced hikers, a various environment, and with interesting views.

However, a significant people often undertake illegally the traverse of the White Tatras. Browsing pictures, it looks quite obvious that few SP folks went a bit offtrails in the area :) Considering these particularities, all those willing to enrich this page will be granted editing rights.

As for pictures, everyone is welcome to attach some more, but in order to avoid this page being a sort of duplicate of the "Belianské Tatry", let's try to attach significant pictures which show Havran without Ždiarska Vidla, or having Havran clearly as a main object of the picture. Late evening
The peaks stands in an area of Slovakia close to the Polish border, and on the northern hillside of the Tatras. In consequence, paradoxally, this region is better accessible from Poland.

As mentionned in the overview, the top lies in an area not connected to trails, then forbidden without a guide.
The rules of the Tatras National Park are subject to a passionate debate, as many would like to get rid of them in order to bag such peaks. A lot of people deliberately choose to ignore them. If you get caught, your sentence may vary according to the situation, the way you behave, also your equipment (safety is one of the reasons to be of these rules).
The biggest threat to the nature of the Tatras, and the main issue with safety is mass tourism: unprepared people, talking loud, leaving rubbish, etc etc.
One of the goals of these restrictions is also not to show the "bad example", especially during the high season.

To conclude, going to Havran is your choice, and if you read this, there are good chances you have already decided to go. The aim is not to encourage breaking the rule, but do it as a responsible mountaineer. Don't leave any trace of your passage, don't be noisy, don't force the animals you meet to turn back when they notice you.
Go as early as possible in the morning, to reduce your own chances to be fined, but above all to avoid other people possibly following you to choose going oftrails too. Go also out of the season and during the weekdays. Don't go as a large group of people. Snowy twins
In some publications, and despite the area is closed, few routes to Havran are accurately detailled.

One of them is in the the excellent book "Nieznane Tatry I" by Leszek Jackiewicz (in Polish).
On internet, one can also find a very good description of the ascent of Havran, on the portal of "GORY magazine", a polish mountaineering publication. Here is a link to the Google-transalted version.

Two routes are most commonly described, one from the village of Podspády, via Havrania Dolina, and the other one from the Pod Muranom cottage in the Javorová Dolina.
Having a look at this picture in Wikipedia, it looks like many other ways to reach Havran exist in Javorová Dolina, in particular one following the hollow from the pass Tristarské sedlo (between Havran and Ždiarska Vidla), obviously an avalanche corrie, without trees. 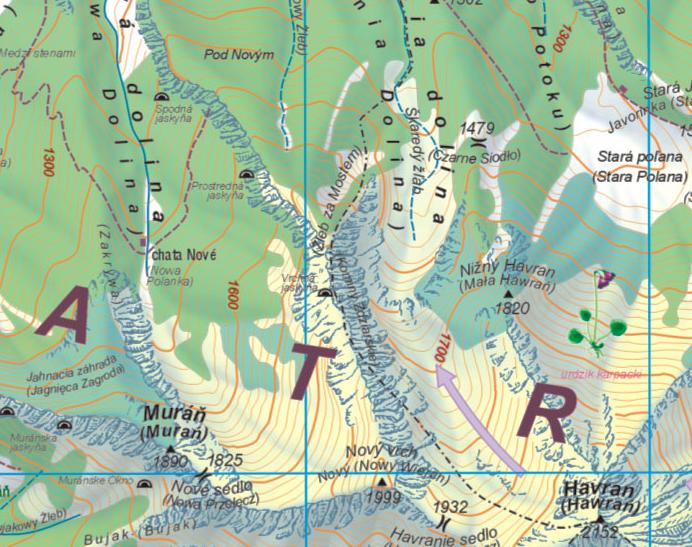 tour cycliste 377634 - powered by Wandermap
Click here to visualize the same routes on the Slovak VKU maps (Firefox, Chrome and Opera only) Chata Plesnivec
Wild camping is already forbidden in the TANAP national park, so we can forget about the White Tatras. Additionally, this would be risky as the area hosts a lot of bears.