From Javorová Dolina
Despite its very modest height and size, Muráň (Murań in Polish, Murány in Hungarian), is the most famous mountain along with the "fork's twins", not to say more, for the simple reason it is the most challenging of the "White Tatras", involving real rock-climbing. István Berzeviczy, Hungarian aristocrat, did the first known ascent as soon as 1717, which is quite soon indeed, and attests of the early popularity of the mountain.

Its etymology, which already makes no mystery for all latin and slavic languages speakers, means "walled", Muráň being circumvented all around by vertical cliffs with an average of 200m of drop. Having said that, it is far to be a perfect cylinder: it is rather a triangle lying on a slope, with its sharp and tallest end looking proudly to the South-East, like a cape. The mountain is not to mix with an homonym village in Slovakia, which owns a beautiful and famous eponym castle.

Muráň is what we call in geologic language a perched synclinal. Below the top, the whole summital surface of Muráň is made of a meadow, scarcely covered with dwarf pine. This meadow is called "Jahňacia zahrada" (Jagnięca Zagroda PL), the "lamb farm", since sheep where grazing here during the 19th century. The reasons to this were double: all pastures across the whole Tatras were overcrowded with cattle, and no one so far thought about this location. Additionally, the fact that Muráň was surrounded by walls was very convenient, because herds could never disperse very far, neither be attacked by any predator (wolves, bears). The only inconvenient was that each animal had to be lifted one by one on men's backs, via vertiginous ladders !
None of this remains nowadays, except the location of this very spot, known as the "normal route" to Muráň.

Unfortunately, due to the nature preservation rules (eagles nesting, bears, numerous chamois, fragile vegetation layer), most of the sector is not allowed to hikers, including those owning a club licence. This is possible only with a guide. However, a significant amount of people climb Muráň illegally. Considering these particularities, all those willing to enrich this page will be granted editing rights.

From the official marked trails, the Muráň is best seen from the trail in Javorová Dolina, near the junction "Pod Muranom", ("under Muráň"), where we can admire the south walls. A gorgeous view of Muráň is also available from the meadow opposite from Hotel Kolowrat, on the road between Lysá Poľana and Javorina.

Panorama from near Hotel Kolowrat. Muráň is on the left, dark in the foreground
As for pictures, everyone is welcome to attach some more, but let's try to attach pictures showing significantly Muráň and not the whole ridge of the White Tatras; possibly with Havran (from West, he's often in the background) but with Muráň in foreground. South face
The peaks stands in an area of Slovakia close to the Polish border, and on the northern hillside of the Tatras. In consequence, paradoxally, this region is better accessible from Poland.

Panorama from near Hotel Kolowrat. Muráň is in the middle in the foreground Panorama from Kolowrat
As mentionned in the overview, the top lies in an area not connected to trails, then forbidden without a guide.
The rules of the Tatras National Park are subject to a passionate debate, as many would like to get rid of them in order to bag such peaks. A lot of people deliberately choose to ignore them. If you get caught, your sentence may vary according to the situation, the way you behave, also your equipment (safety is one of the reasons to be of these rules).
The biggest threat to the nature of the Tatras, and the main issue with safety is mass tourism: unprepared people, talking loud, leaving rubbish, etc etc.
One of the goals of these restrictions is also not to show the "bad example", especially during the high season.

To conclude, going to Muráň is your choice, and if you read this, there are good chances you have already decided to go. The aim is not to encourage breaking the rule, but do it as a responsible mountaineer. Don't leave any trace of your passage, don't be noisy, don't force the animals you meet to turn back when they notice you.
Go as early as possible in the morning, to reduce your own chances to be fined, but above all to avoid other people possibly following you to choose going oftrails too. Go also out of the season and during the weekdays. Don't go as a large group of people. Part of Muráň in winter The "cape" of Muráň
In some publications, and despite the area is closed, the route to Muráň is accurately detailled.

One of them is in the the excellent book "Nieznane Tatry II" by Leszek Jackiewicz (in Polish).

Basically, the final portion of the route, via the "entrance" of the fortress, is always the same, while the starting point can differ.
It consists in reaching the wide valley Medzistenná Dolina (Dolina Międzyścienna), from Podspády or Javorina, and leave it south via a tiny trail which leads in the forest to the base of Muráň.
The rock-climb is medium level, and rather scrambling. After the end of the climb, we must walk the meadow "Jahňacia Zahrada" (Jagnięca Zagroda) till the top wich forms its opposite end. 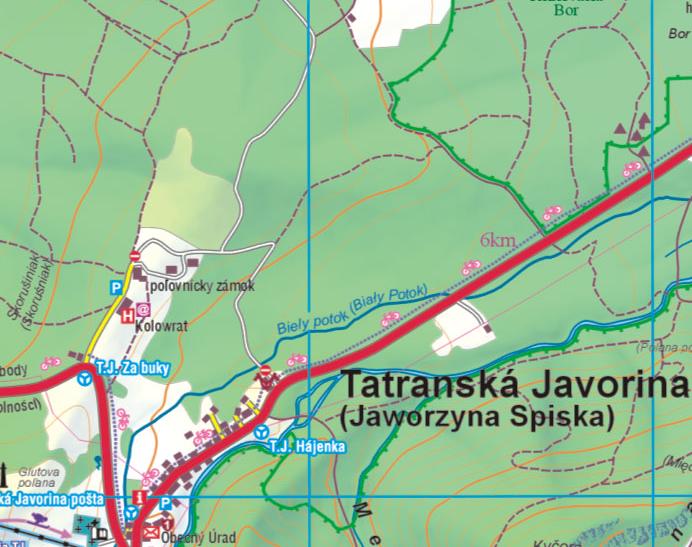 tour cycliste 380384 - powered by Wandermap
Click here to visualize the same routes on the Slovak VKU maps (Firefox, Chrome and Opera only) Chata Plesnivec
Wild camping is already forbidden in the TANAP national park, so we can forget about the White Tatras. Additionally, this would be risky as the area hosts a lot of bears (except on Muráň itself, but if you've got a red tent, hiding will be difficult !).

1 Nationality adjectives (adjective = adjectif in French:)), including Slavic and Latin:), normally need a capital letter: French-English 2 Why Polish or Gallic (LOL!) people may care 3 synclinal is an adjective; the noun is syncline BTW Another really interesting page by our French lightning:)

Perhaps Eric was using the Hungarian part of his brain - our adjectives are all lowercase! Liberté, égalité, fraternité :)

The Polish brain would be enough, and I guess the same must go for the French brain but je ne suis pas sûr. :)