Do you want to call it Holy Ghost in English, Aghion Pnéwma (ἅγιον πνεῦμα) in Greek or Heiliger Geist in German? It doesn't mean! It's a wonderful and stunning peak belonging to the area of Meteora (Μετέωρα), whose meaning is literally "hanging in the air", a charming and suggestive climbing site located in the Thessaly region of Greece, including about 170 summits of various shapes and types, as massive mountains, rocky pinnacles, minor peaks and spires, some of which are truly amazing and bizarre. When viewed from most directions, Aghion Pneuma has the shape of a massive mountain with the exception of the perspective from East: from here it appears as a slender and stunning tower, so beautiful to be taken as the very symbol of the entire Meteora area. On this peak there are several superb climbs and amongst those the stunning route realized by the Germans Heinz Lothar Stutte and Helmut Mägdefrau in 1981: the mitycal Traumpfeiler, the Pillar of Dreams, a perfect line on a peak full of charm.

Since the year 1988, the first time i had visited Meteora during a climbing trip in Greece and in the former Yugoslavia, I began to feel a deep attraction towards this site and as I watched the magnificent precipices of the Holy Ghost I suddenly had a desire: to climb the Pillar of Dreams. But the holidays were about to end and a long trip separated me from home; many years had to pass before the dream could become reality. I did a new trip in the area several years after, planning to climb this route after some other climbs on different spires to get a good train. But the weather got in the way and I returned home the second time without climbing the pillar of my dreams. Anyhow i didn't give up and I went back again in the year 2013... Meteora is also famous in reason of the surprising ancient monasteries, with some of these latter actually located on top of the pinnacles. Despite the peculiar rock - a kind of conglomerate which can be found in few places in the world, such as Montserrat in Catalonia (Spain) - and the particular climbing style, which requires a bit of training and a certain amount of experience, Meteora in my opinion is truly a magic place to stay and climb.

All the towers and spires in Meteora area, even the smallest, have a summit book and as a rule usually have two names: the local name in Greek and the German name. This latter originates from the fact that the climb in Meteora had developed thanks to the enormous activities performed by a group of German pioneers, in primis the physicist Dietrich Hasse and the photographer Heinz Lothar Stutte, who affected by a fascinating picture of Meteora, since the Seventies began to explore the mountain range and climbed all the most important summits, with the exception of the five towers on which lie the monasteries. The same climbers realized two climbing guides of the area.

Meteora is situated in the Thessaly region of Greece, Northern half of Greece, approximately 25 km NNW from Trikala, and immediately North of Kalambaka and Kastraki, the two main towns in the area, both located very close to the rocks. The closest main town is Larissa. The distance to Kalambaka is about 360 km from Athens and 237 km. from Thessaloníki.

By plane - Meteora can be approached from Athens Eleftherios Venizelos airport or from Thessaloniki airport. From these airports you can:

- take a domestic flight to Larissa (about 85 km from Kalambaka) - rent a car, useful once you are in Kastraki, but not essential - use public transports (bus or train). Getting to Meteora without a car is easy thanks to the train from Athens that stops in Kalambaka.

By ferry from Italy – If you wish to travel with your own car, there are different shipping companies and many ferries departures to Igoumenitza harbour from the Italian harbours of Ancona, Bari and Brindisi.

Walking approach Aghion Pnéwma is easily and briefly approached. There are different approaches depending by the route you have planned to climb. The routes 4-5-6-7 are located above Aghion Pnéwma little church and must be approached from the NE edge of Kastraki village, following the trail to the church.

A. from the road leading to the upper Meteora monasteries

B. approaching by walk starting from Kastraki old sector

A. When driving from the village of Kastraki towards North - to reach the summit monasteries - you soon see the rounded peak of the Doupianifels on the left near the road and just in front on the right the Aghion Pnéwma (recognizable for the niches with flags in the middle of its wide wall) and Heiliggeistwachter (a minor spire resting on the  wall of Aghion Pnéwma). After a bend towards right, the road passes a pull-out on the left. Continue driving and reach a little pull-out just in front of the obvious mighty structure of Aghion Pnéwma. Park the car and take a path descending to the bottom of the valley, then crossing the path coming from the village. Take the right to get the routes 1-2-3 and the left one to get the routes from 8 to 15.

B. Reach the Church of Kastraki in the old part of the village. Proceed down the street towards the southwest edge of Aghion Pnéwma, continue straight down and park near a small building on your right. The trail starts behind it.

Descent: 3 abseils (15+40+40) along the route "Weg des Wassers". From the summit cairn (summit book) head to South (cairns) to find the first rappel anchor. A brief rappel, then two 40 mt rappels to the ground close to the Aghion Pnéwma small church. Don't miss it! From the Church two trails start: the left one descend back skirting the bottom of the NE face, the right one leads directly to Kastraki. 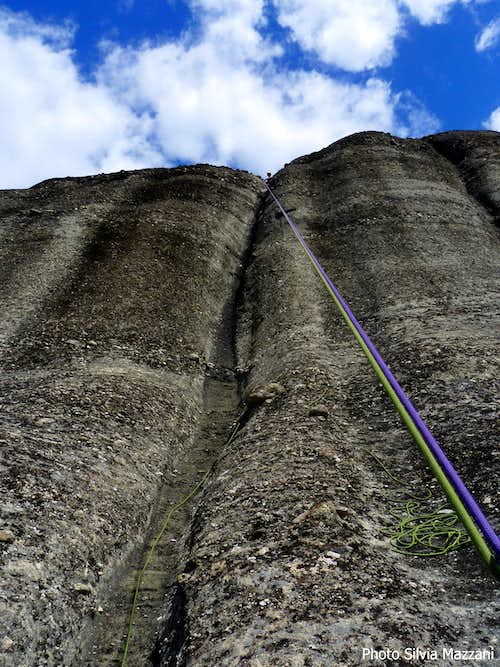 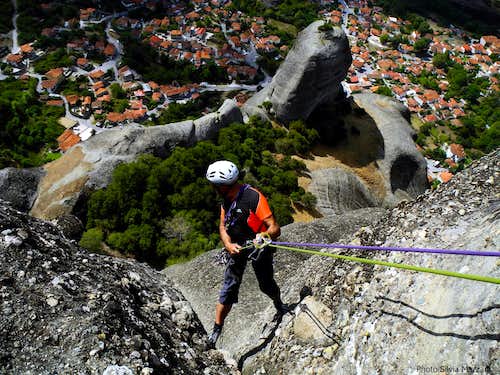 No fees and no permits required. Anyhow, if you are visiting this area, remember that climbing the peaks when the inhabited monasteries are located is prohibited. In the '70s Dietrich Hasse and his team decided, together with local authorities, not to climb routes on these towers. This rule applies even today, together with the suggestion that climbers have not to add fixed protections to the pre-existing ones.Since the year 1988 Meteora was declared an Unesco World Heritage Site.

The rock is a gray-brown conglomerate. It is believed that the needles began to form in the Tertiary - about 60 million years ago - starting from the materials deposited at the border of the Thessaly plain when the prehistoric sea waters, which previously covered the plain, withdrew. Slowly the conglomerates needle were then sculpted over the millennia, by water, wind and earthquakes. The texture of Meteora rock results from a mix of pebbles, cobbles and larger stones, packed into a rock surface which appears like concrete but actually is a mixture of conglomerate and sandstone.

Sometimes cobbles have come loose from the rock to leave shallow holes in their place. What emerges is a peculiar climbing style, mainly slabby and balancy on cobbles, consisting in exploiting small or large pebbles protruding, or otherwise the holes remained where the same pebbles were formerly located. As soon as you get used to it, the climb will provide fun and generally little tiring.

The vegetation is considered as supra-Mediterranean, with climax cover of Quercus and Ostrya species and Fagus sylvatica beech forest above 700 m. The area includes forested hills and river valley with forests of Platanus orientalis and species such as the endemic Centaurea lactifolia Centaurea kalambakensi.Meteora during the summer is influenced by the climate of the tropics extending its influence into the Mediterranean area and therefore a great heat can be expected.

On the contrary during the winter the area is influenced by the Central Europe climate, that often produces changes from fair weather conditions to bad weather conditions.Best seasons are the middle ones: Spring till middle May and early Fall.

In theory it's possible to climb all year round (snowfalls are rare), but summer and winter are not advisable because temperatures may be unpleasant. The best months are late March, April, May, September and October.

There is a wide choice of hotels, B&Bs, rooms for rent and an organized campsite (Camping Vrachos) in Kastraki, the village built in the shadow of the Meteora towers. There is also a smaller campsite near the tower of Doupiani.The nearby town of Kalabaka also features many accomodation choices.

“Meteora – Climbing and hiking” by Dietrich Hasse and Heinz Lothar Stutte - I edition 1986, in English and German. It contains around 230 routes. Also, it provides general information about mountaineering, hiking in Meteora, maps, directions.

The second guidebook is:

“Meteora Climbing Part II” by the same Heinz Lothar Stutte and Dietrich Hasse – II edition 2000 – German, Greek and English - Note: the II edition is not a complete guidebook, but an update to the I edition