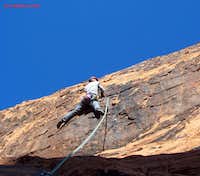 My visit to Calico Hills was quite late in regard to my Red Rocks experience. I had climbed over a dozen of the larger routes at the west end always bypassing Calico Hills on my visits with the exception of one trail run via my very first visit to Red Rocks. Red Rocks was never a “sport climbing” destination for me, thus I never paid Calico Hills much attention. However during the winter months of January-February, there can be days where Calico Hills can be quite inviting compared to its larger brethren to the southwest. One such cold day, I and two of my Canadian partners took on the classic 2-pitch trad Great Red Book route and then started eyeing the local sport climbing lines basking in the afternoon winter sun. The Great Red Book route was darn cold early in the morning, but we got it out of the way and made our way over to its long sport routes to the right and then on down to the Hunter S. Thompson Dome sport area which was receiving fantastic mid afternoon sun. 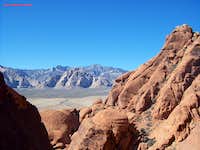 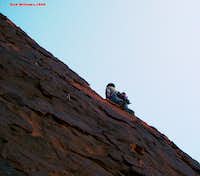 
The Hunter S. Thompson Dome is comprised of short and long bolted and mixed routes located on the west facing side of a dome located on the right side of an open gully directly across from the 2nd pullout of the Red Rocks loop road. It faces the road and is recognized as a white face topped by a large roof. It takes the shape of a perfect dome when viewed from the east if up at the Great Red Book. From the parking area for the 2nd pullout, descend the main trail taking a right at the first opportunity. Take the first left (50yds) and continue your descent down into the wash. Cross the wash to the right and continue heading north. Some 30’ below the top of a shallow gully, turn right again and follow a ledge around to the right into a flat area. To your left is an obvious steep climbing area which should have tons of chalk on it (Sweet Pain Wall). Ascend the gully past Sweet Pain and scramble right again to the base of Hunter S. Thompson Dome. Scramble up left to the various routes facing southwest.

(photo) An easy 5.10a closer to 5.9 than 5.10b in my opinion. Chrome Dome is the left most route (2008) on Hunter S Thompson Dome. Eight bolts takes you through quite positive, although some overhanging, varnish to chains.
(photo) Both of these next 5.8 routes are quite easy for the grade, particulary compared with older routes at Calico Hills, i.e. the 2nd pitch of the Great Red Book. Crazy Eights is the longest of these three bolted routes that make up the left side of Hunter S. Thompson Dome. Nine bolts to chains.
(photo) Pretty much the same as Crazy Eights, but stops shorter by 20’. All quite positive holds to be sure. Eight bolts to chains.

With a 70m rope, you can do the longer mixed pitches in one pitch and walk off the top. Double 70’s would no doubt help with rope drag. A double rack from .4 to #3 camelots should get you up all the mixed routes no worries. A ton of draws, remember, some of these mixed routes are 220’.