Moderate Mecca is not a peak; instead, it is one of several dozen climbing crags scattered throughout the Calico Hills in Nevada's Red Rock Canyon National Conservation Area. As the name implies, there are several moderate routes here, though there are some easy and hard ones as well. Here, there are trad, sport, and toprope routes, though one should be advised that setting a toprope often requires first climbing the route on lead to reach bolted anchors above.
Most of the routes are a single pitch, and some are very short, but there are some possibilities for two-pitch leads. One highly recommended one, not because of the challenge but rather because the 5.4 rating makes it good for beginners and new trad leaders, is Abbey Road, near the left end of the crag. Most only climb the first pitch to set anchors, but a short, easy second pitch puts one in a place to scramble to the top of the crag and take in the panorama.
Note to coordinates checkers-- the coordinates given on this page mark an approximate location. The pictures and directions should be more than enough to find the crag. 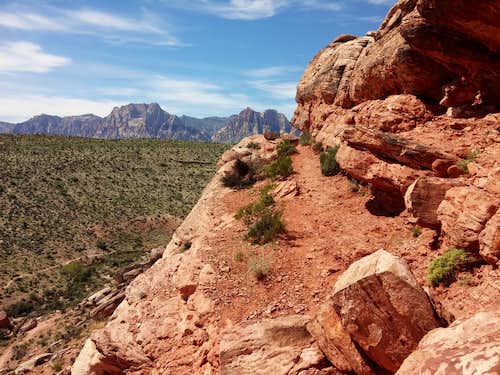 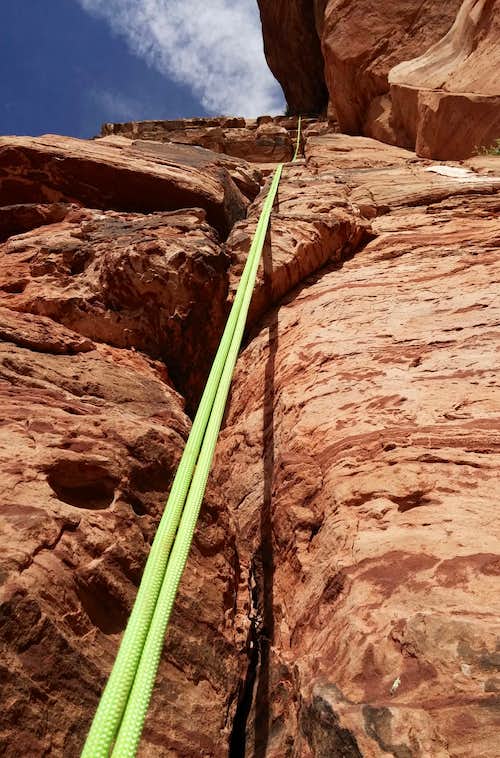 Take Charleston Boulevard through Summerlin, after which it magically becomes SR 159. Before reaching the Scenic Drive for RRCNCA, turn right onto the signed road to Calico Basin. Turn left at the second major intersection. (The first has signs clearly warning about private property.) This second intersection is signed for Red Springs and is really hard to miss. Drive a short distance to a large parking lot.
Don't take the main, boardwalk trail. It will get you there but will add a small amount of time and make you rub shoulders with the rabble. (Take this trail on the way back, with gear hanging from you, to show your superior genetics.)
Instead, take a trail left of the boardwalk trail. It climbs uphill, moderately at first and then steeply, but it is a short climb. Still, it might suck when you are carrying a ton of gear.
When you reach a crest, head downhill and right on a use trail. Heading left will take you steeply down. Don't. Heading up and right on what might look like the right path will disappoint; you will find yourself above cliffs and with no easy way down, and if you and another party started out at the same time for the same route, it could cost you the chance to climb first (my party found a way to make up the time, but it was tight.)
On the correct path, follow the obvious ledge system, sometimes narrow and exposed, until you find the climb(s) you want.
It took me about 10 minutes to reach the routes I wanted on the crag, 5 on the day I realized I'd left my wallet at the base of the route I last climbed! 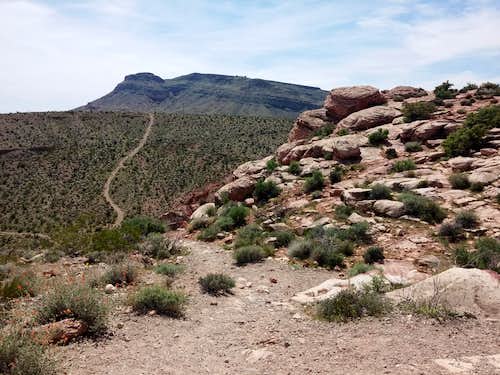 Most of the climbs here are on the south end of the Calico Hills, so you usually will have a view to the big sandstone peaks of Red Rock.
Routes range from 5.3 to 5.12, with most in the 5.7-5.10 range.
There are more than 30 routes here, close to 40 and possibly more, and this page will not list or photograph them all. In the interest of being useful and reflecting my experience and observations, I will offer the following suggestions:
For more information on routes, see this page. Yeah, I know it's the competition, but until SP favors a format for single-pitch routes, then good directions, photographs, and links will have to suffice. 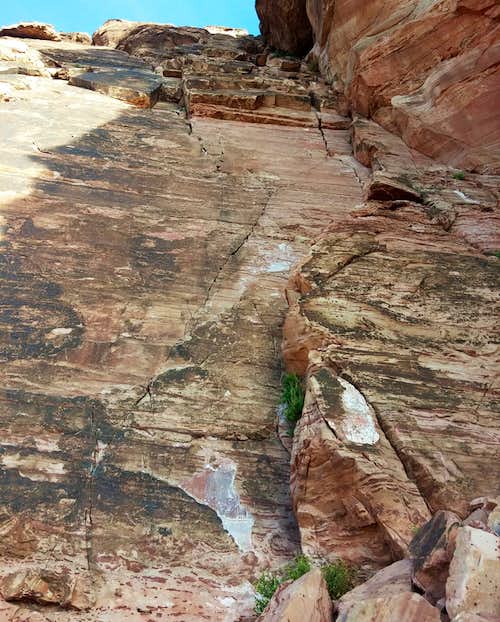 Any season but summer. Because most routes are south-facing, this is a good winter spot.

The nearby Red Rock Campground off Moenkopi Road offers the only camping in the area; this road branches off south from SR 159 not far from the turnoffs for Calico Basin and the Scenic Drive. The campground is usually closed in the summer.