The routes on these two crags are a couple hundred yards apart even though they are all on the same formation.
Scramblers Wall is farther west than the Slab, and it has some low-quality single-pitch trad routes from 5.2 to 5.6 that get up to about 100'. The name probably comes from the fact that it is a simple scramble up or down the wall on its western end. Atop the wall, there are excellent views of the Calico Hills, including nearby Panty Wall, which is likely to have several climbing parties on it.
The Slab is near the eastern end of the formation, not far from Tuna and Chips Wall. It has a collection of bolted routes around 80' in length from 5.5 to 5.10a. 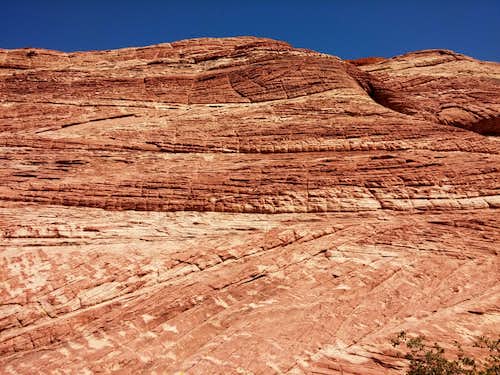 Somewhere Between Scramblers Wall and the Slab
Note: the coordinates given on this page are approximate and mainly to help users utilizing the interactive map. You don't need to exact coordinates to find this spot. The directions and pictures should be more than sufficient.

From SR 159 west of Summerlin, turn onto the one-way Scenic Drive of Red Rock Canyon National Conservation area. Drive about a mile to the First Pullout. There is ample parking, but this lot can fill up quickly. It often has a jammed, circus-like atmosphere in the afternoons.
Hike down, taking a left fork as you go. Pass Tiger Stripe Wall. This is a large formation detached from the main cliff mass. Its markings and the fact that it is plainly visible just to the left from the parking area make it impossible to miss.
After passing Tiger Stripe Wall, take a use trail over a small rise and down into the wash below. You will be at the sandy base of the crag. Head left for Scramblers Wall and right for the Slab.
Give yourself 10-15 minutes for the approach.

The wall has three main crack systems. I know of two named routes. Both have bolted anchors at the top. The routes are about 80', and you can walk/scramble off to climber's left. From left to right, here are the two named routes I know:
Because of the softness of the rock, I recommend passive pro, though, as noted, I did place a #2 Camalot on one of the routes. Bolted anchors above the two routes I climbed mean you can just have a sling/cord and some biners for your belay anchor.

Wow-- when I first added this page, there were six bolted routes here, each with 5 or 6 bolts, and one toprope route. All had anchors above them. What I liked was that on each route, it did not seem to difficult to reach and clip the first bolt. The routes went from 60 to 80'.
Now there are 15 sport routes. Most of the new lines are to the left of what I have listed below, and some of the below routes now have different names. (For example, I'm pretty sure What R Streak is now Streak on the Slab and has been bumped up to 5.10a.)
From left to right:

Please see the MP page for a full listing, including good topos, of the "new" wall

Gear: at least 6 quickdraws, cord or sling plus biners for belay anchors.

About fees and passes.
Hours the Scenic Drive is open:
Note: these hours are subject to change.  To be safe and sure, contact the park before visiting.
Don't climb after a strong rain. The rain weakens the rock, making it break easily.
It's illegal to install new bolts in the wilderness areas though you can replace existing ones. I think the same holds true for non-wilderness areas now, but if in doubt, please contact management using information from one of the links in the last section.

There are no campgrounds off the Scenic Drive in RRCNCA. There is a campground outside it, though; see here for more details.