Lenana, often referred to as Point Lenana, is a side peak of Mt Kenya. It is the third highest summit (after Batian - 5199m and Nelion - 5188) in the massif. A majority of trekkers who declare they have "climbed Mt Kenya" have usually only reached the summit of Lenana. The peak is by the two normal routes an easy acent on scree, rocks and at times snow. A few sections involves some very easy climbing. Lenana is probably the most climbed peak in Kenya and from the summit you have excellent views of the impressive rock towers of Batian and Nelion, as well as glacial lakes and the rolling landscape of Mt Kenya National Park.

The approach itself is well worth the effort of going there. You start from the agricultural lowlands, goes through dense semi-tropical rain forests and arrives at rugged grass lands, high altitude meadows and finally you're in rocky surroundings with glaciers and snow.

Check out the Mount Kenya page for an overiew of the whole massif.

Ascent through the clouds

The Mountain Club of Kenya recently added some info on their site. Lenana is a trekking peak, but consider the below warning.

The Lewis glacier has receded significantly, and has left behind steep ice, covered with small stones on the western flank of Point Lenana. The usual 'tourist route' up Point Lenana traverses across this ice slope, which although is in the lee of the prevailing wind, does require a high degree of competence on slippery and loose steep ground. The route is no longer as described in current Guide Books. This route relies on the stones being frozen onto the ice for traction, so anyone attempting this route during the warmth of the day should take great care. The alternative route from Austrian Hut would be to scramble up the summit ridge, and although this would be fully exposed to any wind, it would probably be safer. Point Lenana has become a much more serious undertaking over recent years and can be a dangerous place for the inexperienced and ill-equipped mountaineer.

Starting from Nairobi there are two options:
1. You go by local transport, which in this case is by bus. The cost is roughly $4.
2. You go by a rented vehicle. A station wagon or a minibus is the most appropriate if you are a group of people with backpacks. The cost for a vehicle starts at $30, but the asking price can be much higher. We where asked for $125 initially. Bargain hard!
Make sure where the vehicle takes you. Decide to go either directly to the park gate, or one of the towns mentioned below, if you wanna spend a day there before heading for the national park.
The national park has a paved ring-road which goes all around the mountain, but the roads leading to the park gates are rough, sometimes hard going for a normal non-4W drive vehicle.


There are three starting points for entry to the national park:
Chogoria, Naro Moru and Nanyoki.  They are all mid-sized cities with hotels, restaurants and shops.

I can only give you details about ascent via Chogoria route and descent via Sirimon route, and find it better to refer to either the Mt Kenya page or EWP's website for more details.

Chogoria route:
The forest gate where you pay the fee for the forest area, is located approx. 8km from the tarmac road. Fill your water bottles/sacks here as there is no water for the next 23 km. A walk on a bad quality dirt track takes you through dense semi-tropical rain forest. Lots of animals are heard in the bush, but you seldom see any. It is a gradual uphill which takes you from 1700m to 3050m. Just before arriving to the park gate, the dense forest disappears and rolling meadows with rough grass takes over. This area is supposed to be dangerous in the twilight hours and at night as the buffaloes and elephants come out to graze. Nice camp spot at the park gate. Taps with fresh water and a lodge nearby. This where you pay the fees for the park. US Dollars, Euros and Kenyan Shillings accepted.
After approx. two hours walk you arrive at a nice camp spot next to a small river. The path gradually gets steeper and the first views of Mt Kenya appears. Excellent camp spot at approx. 4100m at a small, but probably seasonal stream.
Mintos Hut, a rat infested hut is located at 4300m. The path is harder to find after this place, but it's not too hard to follow the cairns and green poles if the weather is fine. Some steep sections on loose scree takes you up to the eastern approahes of Lenana and circles it to Top/Austrian Hut, which is at the base of the mountain.
Beautiful, diverse and interesting route - recommended!

Sirimon route:
After traversing the summit of Lenana, you walk straight down to McKinder's Hut. Steep in sections and if snowy, you may be better of using crampons. After the hut there is a long stretch in an open valley with loads of nice vegetation and animals. Marmots and smaller types of rodents in abundance.
When hitting the river, where the valley gets more narrow, be very careful with your route finding! We lost the the trail completely here and always keep to the right in the valley in order to find the path leading over the ridge on your right hand side. After some hours of walking, you'll see Old Moses/Judmeier Hut. From there it's an easy walk to the park gate through dense forest. The final stretch is through agricultural landscape and a local bus to Nanyoki can easily be caught when you hit the asphalt road.

There is no peak fee.
You pay $15/day for visiting the national park and $8/day for camping. Arriving from the Chogoria route, you also have to pay $3 to the forest authorities. If you aim for the two technical summits in the park, Nelion and Batian, the rangers at the park gate may ask you for proof that you have the necessary equipment. I was asked if I had crampons, because the conditions were icy even on Lenana when I visited the park.

Lenana can be climbed in any season, but the experience can vary from a nice and easy one, to a wet and muddy. There are quite a lot of rain in March, April and May. Also in October and November. Conditions can be foggy and rainy in also in December. The driest period is in January and February.
It's like many other tropical areas; clear mornings and if there is rain, it usually hits you in the afternoon.
The rangers said the lowest temperature recorded in Top Hut, at the foot of Lenana was - 17C, but normally it seldom went down under -5C. The whole central massif of Mt Kenya are plagued with sudden, fierce gusts of wind, so be prepared with warm and windproof clothing.

Camping is allowed everywhere in the park. The only exception may be for larger parties close to the mountain huts, where the caretaker have the right to tell you where to pitch the tent.

There are plenty of huts in the park.
Some of them has to be pre-booked, others can be paid for in cash directly to the caretaker. Usually you have to pay the fee in Kenyan Shillings, but exceptions for US dollars and Euros can be made. 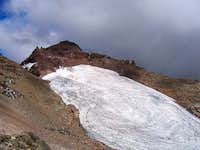 The park rangers are keeping good track on the weather conditions. There are huts with rangers on all the normal approach routes and they are happy to inform you about the current situation, both on the actual mountain and about the weather forecasts.

It's bascially a trekking peak and the majority of people who ascend Lenana either use the southern approach from Top Hut, or from from McKinder's hut from the north. The former is an hour of scramble on scree and rocks. Short sections of very easy climbing. Ascent from the north is longer, counting from the hut, but equally straightforward.
The rangers said the SE-face is a training ground for rock climbing. To ascend by this route, technical gear is needed.

It seems to be standard to hire at least a guide and many times also porters. Personally I can't see any reason doing so, as the trails in most cases are clearly marked and the walking is not harder than on most other mountains.
Prices for these services vary a lot and what it finally comes down to is your skills in bargaining.
Porters, guides etc. are readily available in Nanyoki, Chogoria and Naro Moru. You can either head for one of the many tour organizers or just hang around in the street looking lost and you'll be approached by persons who either personally offer you guiding services or takes you to a booking office.
Be sure the guide is certified by the park authorities.

A map of the area.
Mt Kenya and Lenana, seen from Teleki Valley.