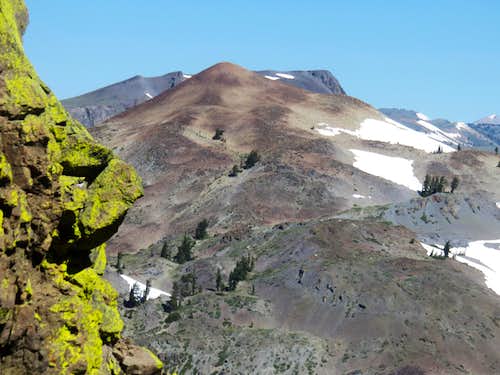 Lost Lakes Peak from The Nipple

Lost Lakes Peak, or Peak 9,374 on topographic maps, is a mountain summit in the Mokelumne Wilderness in Alpine County, California.  It rises 420’ above the Pacific Crest Trail (PCT) and about 750’ above the Lost Lakes, just to its south.  It is a very pretty, mostly treeless peak.  Very light scrambling, and a little bit of off-trail hiking, is required to reach the summit.

There are stellar views from the summit, including the Lost Lakes, the Blue Lakes, Ebbetts Pass, Sonora Pass, and Carson Pass peaks, including the magnificent Round Top 10,381’.

Lost Lakes Peak is easily accessed from the PCT, and it is best hiked during the summer and early fall.

The Peak is approached from either the cut off trailhead, the PCT trailhead or from Blue Lakes. The shortest route is to start at the dirt road off Blue Lakes Road.  It is at 38.6374, -119.9157.

A longer option is from the PCT trailhead at Carson Pass off of Highway 88.

If starting from the PCT trailhead, you are starting at Mile 1,065.5, and 8,140’.  You can leave the PCT just before Mile 1,070 and hike off the trail up the southeast ridge to the summit in about a half mile.  Descend the back side of Lost Lakes Peak back to the PCT to create a nice loop, and you’ll be near Mile 1,071’.  That would make just over 11 miles round trip back to the trailhead. You gain a little over 1,800’ on the way up, but another 1,000’ of elevation gain during the descent. 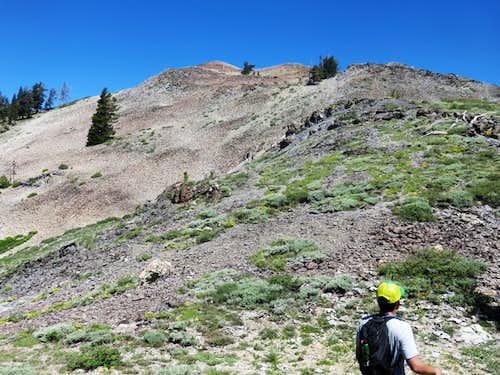 Approaching the summit via the southeast ridge

For the shorter route from Blue Lakes Road, start at the dirt road, and head up to the area above the trees.  Once you go up and over the ridge, you will see the PCT.  From there, simply follow the trail for about 2 ½ miles.  You can also ascend via the southeast ridge.  You may also continue another mile and ascend via the northwest ridge, or just do the loop described above.  If just hiking to Lost Lakes Peak via this route, the total round trip distance is 3 ¾ miles, with an elevation gain of about 1,650’.

The shortest route is from the end of Blue Lakes Road.  Park at the end of the pavement by the east shore of Upper Blue Lake.  Make sure you aren’t parked in somebody else’s campsite. Continue up the dirt portion of the road, which heads along the north shore of the lake, and then winds up to the PCT in about 2 miles from the pavement.  It is another three-quarters of a mile to the summit.  Do the loop described above and the round trip hike is about 5 miles gaining about 1,200’ on the way up to the summit.

From Carson Pass, simply get on the PCT and take it for about 5 ¾ miles.  At this point you will see Lost Lakes Peak above you, and will scramble up to the top.  The total round trip distance is about 12 ¼ miles, with an elevation gain of over 1,600’ (due to the ups and downs of the trail).

There is no red tape to speak of.  The hike is entirely within the Mokelumne Wilderness. Blue Lakes Road may be closed during times of heavy snow.

Camping overnight at the Blue Lakes is first come, first serve and cost $23 per night.  See this website for camping information.