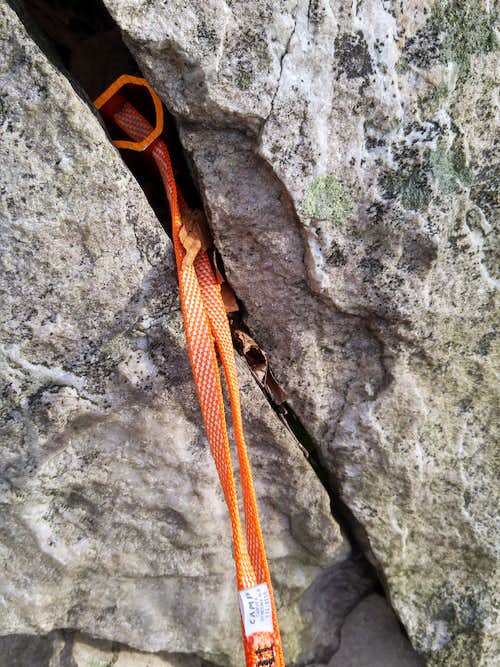 Hex Placement on Last of the Wilds
At Sugarloaf Mountain, Boy Scout Ledges and Middle Earth get most of the attention because of easy access (next to a maintained trail or very close to it) and a concentration of moderate routes, but there are four other nice climbing spots on the mountain. Lower West View, or Lower Westview Slabs, is one of them. There are only five established routes there, the hardest is 5.7, and none are considered area classics, but the crag offers a break from other climbers and the typical weekend hiking hordes (consisting of large numbers of non-hikers out for a hike, if you catch my drift) in a scenic location. There is even the possibility of what is a regional rarity-- making a multi-pitch climb.
Because the cliffs face southwest and have little shade, they get great winter sun. On a few occasions during February 2016, I climbed here when temperatures were in the 40s and was very comfortable.
There are both trad and toprope routes here. To toprope, it is actually easier to lead a route and then set an anchor for something else. The five climbs essentially end in the same place, so one anchor can suffice for all three even if the placement isn't exactly ideal for some of them. (The exception is the first route listed in the Routes section; there would be many problems with toproping that one off the anchor used for the others, so just don't do it.)

From I-270 in Maryland, take Exit 22 onto MD 109 and head west. In about three miles, turn right onto Comus Road. In a few minutes, you will reach the entrance to Sugarloaf. Follow the one-way road up the mountain and park in the West View lot. Instead of taking the Green Trail from the right end of the parking lot (this is the trail accessing Boy Scout Ledges and Middle Earth), head up some steps near the middle of the lot and pick up the Blue Trail. Go left (north) and soon you will see the slabs across a talus field. Boulder-hop your way through the talus to the base. From the parking lot, the approach is 10-15 minutes.

There is also an approach from the west via U.S. 15 and MD 28. From 28, take a left onto Mouth of Monocacy (easy to miss, but another turn comes up shortly after). At a stop sign, turn left and eventually reach an intersection directly across from the park entrance.
Of course, there are other approaches depending on where you are.

My sources for these routes are the Mountain Project page and Indy's Guide. I have climbed all five of them, two on lead and the other three on toprope.
From left to right as one faces the base of the crag:

On lead here, I have used stoppers, hexes, and cams up to the size of a C4 #2. Tricams might help on some of the horizontal flakes and cracks, but I have not tried mine here yet.

The mountain is privately owned by the Stronghold Corporation but is open to the public from 8 A.M. until an hour before sunset. No alcohol is allowed, so keep your cold after-climb beers well hidden. Clean up after yourself and obey posted regulations (let's just ignore what I said about the beer) so this place will continue to be open to the public.