Sugarloaf Mountain is monadnock, a mountain that remains after the erosion of it's surrounding land. For Sugarloaf this process took 14 million years. It has stood the test of time, because it is composed of resistant rock, particularly at it's summit, which is a massive plate of quartzite. Sugarloaf is a mountain that offers so much to so many, yet it is a mountain of solitude and beauty. It is a small, but conspicuos mountain that rises over 800 feet above it's surrounding land and stands guard over Frederick County to the west and Montgomery County to the east. On a clear day you can see 4 states, the District of Columbia and the Potomac River from it's top. It can be enjoyed by casual weekend hikers and yet offers challenging venues for rock climbers. It is within a half hour drive to Washington, DC, one of the more densely populated metropolitan areas on the face to the Earth and offers it's harried inhabitants a beautiful refuge.

Attaining it's summit can be done in many ways and involves no more than class 2 and some light class 3 scrambling on some trails. You can drive to the East Overlook at 900 feet and scramble up the short, but challenging, Sunrise Trail. The purist, on the other hand, can hike from the mountain base on the Mountain Loop Trail and branch off onto the Northern Peaks and Monadnock Trails to reach the summit. Is Sugarloaf Mountain just a hill in my backyard? No. Is it a titan that requires extensive skills to reach the top? Certainly not! I nervously scrambled up the Sunrise Trail with my daughter when she was five. Still it stands named and waiting to be climbed or hiked and enjoyed by all.

From Frederick, MD: Follow Route I-270 South to the Hyattstown exit. Take Route 109 to Comus, then right on Comus Road to the Stronghold entrance.

From Washington, DC: Go North on I-270 to the Hyattstown exit, circle under I-270 and continue on Route 109 to Comus, then right on Comus Road to the Stronghold entrance.

From Rockville/Gaithersburg, MD: Take Route 28 West from Rockville to Dickerson. After passing under the railroad bridge, turn right onto Mt. Ephraim Road and go 2.5 miles to the mountain entrance.

Map of the Hiking Trails 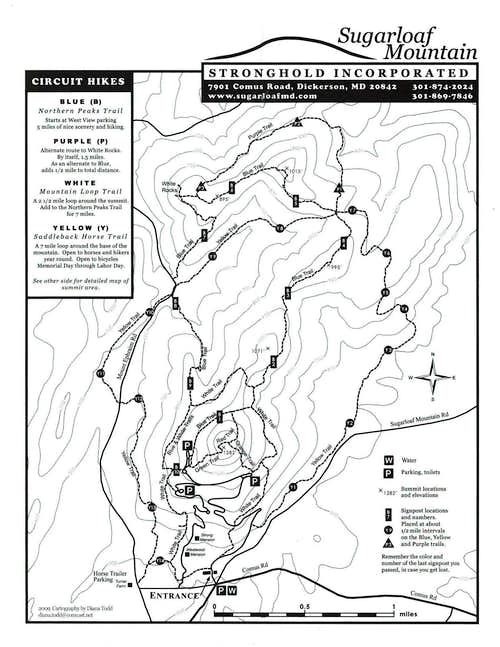 Map of the Park

Sugarloaf Mountain is a conservation/recreation area that is privately owned by Stronghold, Inc. It is open every day of the year from sunrise to sunset. No fees are required, but the following rules apply:
No fires, alcoholic beverages, overnight camping or unleashed dogs are permitted. The speed limit is 15 mph on mountain roads. No roadside parking outside of designated areas. "Leave No Trace" rules obviously apply. 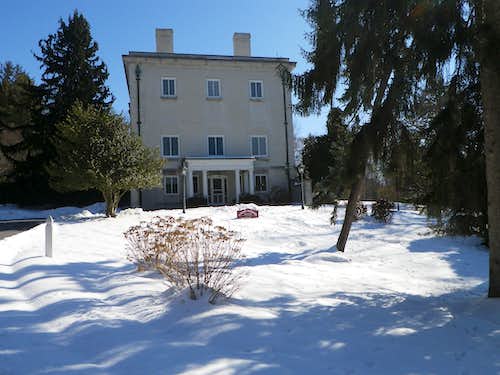 House near the gate

Any time of the year! Maryland's climate is far from hostile. Summer is fine, provided you can tolerate the heat, humidity and man-sized mosquitoes. Fall is spectacular on the mountain, but avoid peak weekend hours if you mind crowds, as the summit can be covered with as many 100 people. Winter offers the best opportunity for some solitude. The mountain is beautiful with the occasional Maryland snowfalls. Spring can be as spectacular as the Fall when the trail's Rhodedrons are in bloom and surrounded by forrest floors of fern. I personally prefer early morning hours when the mountain is often shrouded in Piedmont Valley fog.

No overnight camping is permitted. There is a large sheltered hut at the Potomac Overlook parking area.

Check local Washington, DC or Frederick, MD weather and Sugarloaf will be similar. The Sugarloaf Mountain Newsletter now has a website at www.sugarloafmd.com. It is a great site for mountain history and information, but no weather conditions are provided.

Just a few historical facts and local points here: During the Civil War, Sugarloaf Mountain served as an observation post and signal station for the both the Union and Rebel forces as they frequently passed through the area. Later in the 1930s, Franklin D. Roosevelt considered Sugarloaf as a location for the planned presidential retreat. Camp David in the Catoctin Mountains near Thurmont Maryland won out in the end. A great place to eat in the area is the Comus Inn. It was closed down recently for some reason, but I believe it is open again for business. Ask for a table with a mountain view and order the almond crested trout if it is still on the menu!

Official Sugarloaf Mt. Site
Stronghold Inc. site for the corporation that cares for the mountain.

Based on the map, I think this might be one of the Sugar Loaf variations vs. the Sugarloaf. ??