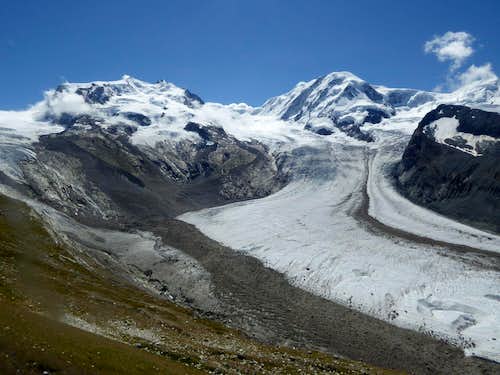 One of the most spectacular views of the Alps: Liskamm (right) with Grenzgletscher and Dufourspitze

The traverse of the Lyskamm ridge is for sure one of the most interesting outings of Monte Rosa – Breithorn range and of Valais Alps.

For the experienced mountaineer there are not many technical difficulties – the traverse is rated AD (fairly difficult) and has a short rock climb with grade II+ moves and on the east and west side of the two summits some steep ice and snow slopes and ridges up to 45 degrees.

But the ridge is high – mostly above 4400 m – and in long parts razorblade sharp with – depending on the snow conditions – sometimes huge cornices on both (!) sides, to the south and to the north. A winter and spring rich with snow helps to moderate the difficulties – this is how I get acquainted with the ridge – a hot summer with poor snow stimulates icy conditions and the ridge can be a nasty piece of work. The same goes with fresh snow cover.

Don´t underestimate the traverse. A good beaten snow track helps to get from the west to the east summit (or vice versa) in 1 – 1,5 hours. With bad conditions the traverse may last about 3 hours, plus the ascent and descent time from the adjacent huts to the summits of Lyskamm.

I was lucky. We had a cloudless day, good conditions with views down to the Appennin range across the Pianura Padana and arrived at Capanna Gnifetti at 2.00 p.m. for a long nap in the sun after a great day in the high ranges of the Alps.

The main starting and end points for the traverse are mainly the italian alpine huts on the south side of Monte Rosa. The only normal route from the swiss side of the mountain range uses Grenzgletscher up to Colle del Lys; normally this route is used for descending to Neue Monte Rosa Hütte. 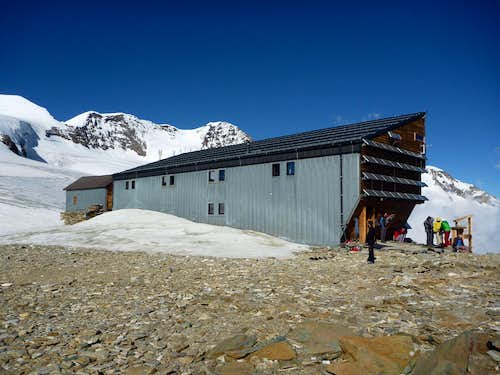 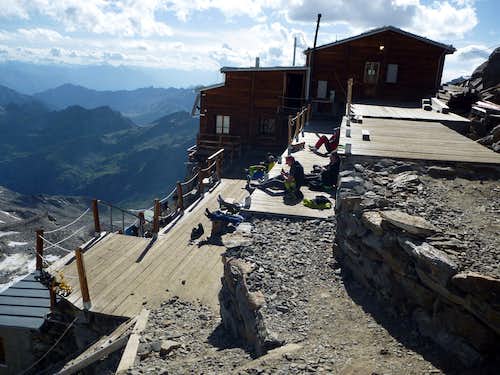 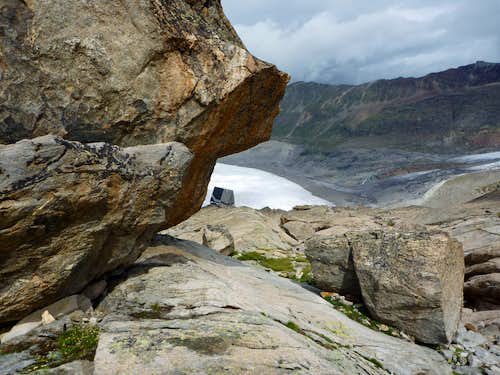 The ridge extends between Felikjoch / Colle Felik to the west and La Sella / Roccia della Scoperta (on the swiss topo maps called Lisjoch), west below Colle del Lys (as named on the italian maps).

You reach Felikjoch from Rifugio Quintino Sella over the Ghiacciaio di Felik (Felik glacier), which is located just behind the hut. Ascend the southern orientated glacier (easy, some crevasses) first straight north and in the upper part northeast to reach a steep snow ridge east of the glacier, which leads  up to Punta Felik and broad Felikjoch.

You reach La Sella / Roccia della Scoperta (or Lisjoch as marked on the swiss topo maps):

Arriving at broad Felikjoch turn in northeastern direction and walk near level to the southwest ridge of Liskamm west summit.

The west slope has a grade of about 45 degrees. There may be good snow or ice. If you feel unsafe, secure with ice screws.

Follow the upper west ridge to the west summit.

Shortly after the west summit the broad ridge gets sharp, narrow, very airy. You have to overcome mixed rock and snow terrain with some ups and downs. Depending on the snow or cornice situation best stay on the ridge crest.

You will arrive at a rock step (about 20 m high) after a while. Descend first steep slabs and then a perpendicular drop (some slings) slighlty south of the ridge crest. This is the rock crux (grade II / II+) of the traverse.

Go back to the still narrow ridge and follow again mixed rock and snow terrain, mainly on the ridge crest, navigating round a rocky knob on its south side.

The track moves then on the north side to avoid a part with cornices bearing to the south, descends and arrives at La Sella, the lowest point between the two summits.

Ascend the broad west ridge of the east summit to the highest point of the traverse.

At the east side of the east summit the ridge gets narrow again and steeply drops dorm to a long level part. This descent requires a good beaten snow track to facilitate things.

The following level part of the rigde may have cornices to both sides; the ridge stays narrow, exposed and traverses below the crest / cornices have do be done carefully.

A second lower steep drop of the ridge ends at La Sella / Roccia della Scoperta, from where you may descend to Capanna Gnifetti, Rifugo Città di Mantoca or Neue Monte Rosa Hütte.

The traverse is mostly done in summer during the summer season of the adjacent huts. However winter or springtime undertakings are possible for the very experienced mountaineer.

It has some very steep and mostly iced slopes (up to 45 degrees) and one short rock part rated with grade II.

Depending on the snow conditions you may encounter more rocks than snow or huge cornices, which may bear out to the north and/or the south.

Don´t go if the weather is not good for a whole day!

Be very careful with fresh snow on the ridge!

Be accustomed to long sharp and very exposed ridges! 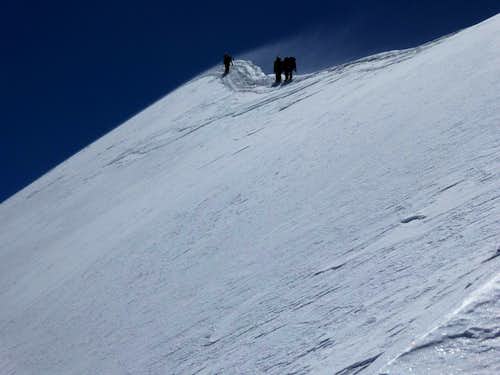