Panorama of the Group 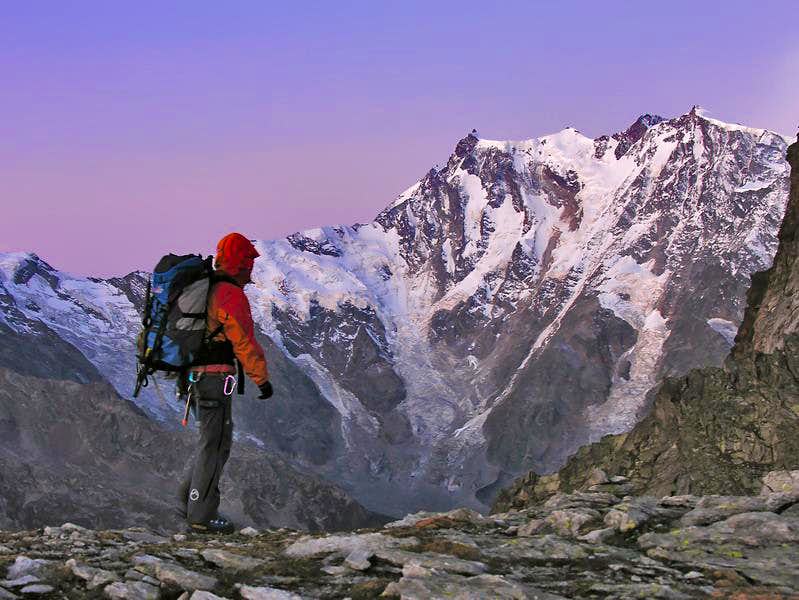 The highest peak on the Monte Rosa is Dufourspitze which is the highest mountain in Switzerland, and the second highest in the Alps.
Monte Rosa includes 22 peaks higher than 4.000 meter. The Eastern Wall seen from Macugnaga is 2470 meter high and stunning: a Himalayan wall in the Alps. On the 4th mountains for high of the group, Signalkuppe (Punta Gnifetti) is situated the highest refuge in Europe, refuge "Capanna Margherita", 4654 high.

The Group can be divided in three parts:

The first part is constituted by the Four Primary Peaks of the region (from south to north): Signalkuppe, Zumsteinspitze, Dufourspitze and Nordend.
The second part, known as Grande Monte Rosa (Great Monte Rosa) is constituted by the Great Ridge of Peaks, from the Theodulpass to the Monte Moro pass, and it includes some other important peaks, Lyskamm East 4527 and West 4481, Parrotspitze 4436, Parrotspitze, Breithorn with several peaks, Castor and Pollux.

The third part is constituted by those Minor Ridges, perpendicular to the main one and elongated in the Swiss territory to North and in Italian territory to South. Important is the Cresta Indren to Italy (Indrengrat) with the Balmenhorn (m. 4167, Italy), the Ludwigshohe (m. 4342, Italy) the Piramide Vincent (m. 4215, Italy) and many other “3000” like Punta Indren (m. 3260, Italy). Also important is the Grosser Findelngrat, in Switzerland, with its Stockhorn (m. 3532, Switzerland)
These three parts constitute the Group of Monte Rosa (or Gruppo del Monte Rosa, or as Gruppo di Monterosa).

Monte Rosa group is situated in Pennine Alps range, between Italy and Switzerland; regions of Piedmont (provinces of Verbania and of Vercelli), Valle d’Aosta (province of Aosta) and Valais (Wallis).

The Group of Monte Rosa is made of crystalline and metamorphic rocks, like the marbles and quartzes, and its great ridge, of the main peaks, runs for about 30 kms, between Italy and Switzerland and it also indicates, with good approximations, the Swiss-Italian border. The range culminates in the Dufourspitze (Punta Dufour), 4634 m.

The follow table contains the 4000 peaks of the group:

Other important peaks are:

The nearest airports are Geneva, Zurich or Milan.

SWISS SIDE:
14 of the 17 mountains higher than 4300 m in The Alps are situated around the very famous and outstanding Zermatt: Monte Rosa Group, Matterhorn, Dom, Weisshorn and lot more.

You reach Zermatt (1616m) only by train or taxi from Täsch (1400 m) because the village is car-free. Täsch can be reached from Visp/Brig in the Rhone-valley by car, bus or train. The train from Visp/Brig to Zermatt and all the way to the trailhead for Monte Rosa at Rotenboden are private lines and hence is not covered by the Euro-Rail or even the Swiss rail pass, so you will have to pay extra for it.

Brig is the main city of the upper Wallis and the junction of the trains from Geneva, Milan, Basel and Zürich.

If you choose car on your way to Visp/Brig:

a. from the West: From Geneva (airport) on the A1 to Lausanne, on the A9 via Martigny and Sion to Visp. Here you turn to the South with direction Täsch/Zermatt.

b. from the North: from Bern on the A6 to Spiez, from here the road to Kandersteg, at Kandersteg, you drive your car on a train and go by train through a tunnel to Goppenstein and then the road to Visp.

c. from the East: from Bregenz on the A13 to Chur; turn off at Reichenau and continue the road no. 19 to Brig/Visp via Flims - Sedrun - Andermatt - Gletsch - Fiesch.

d. from the South: From Milan-Bellinzona on the A2 to Airolo, Nufenen and Brig - only one mountain passes.

ZERMATT - MONTE ROSA HÜTTE
From Zermatt take a another train in direction Gornergrat. Stop at Rotenboden-station - 2800 m. On the right side follow a nice path in the east-direction to the Monte Rosa hütte
(Cottage) - 2-3 hours. The path is going down to the dry Gornergrat-glacier 2550 m. You are crossing the glacier in south direction by follow red flags and crossing another glacier - Grenzgletcher. The last part to the cottage is a steep trail with partly fixed ropes up to the refuge at 2795 m.

ITALIAN SIDE:
You reach Alagna by car on the road no. E62 from Brig via Simplonpass. You turn off at Omegna. Here turn right and drive along the western side of the Lago d. Orta to Borgosésia. In Borgosésia you take the road to the North an reach Alagna via Varallo and Scopello.

You reach Borgosésia also from the South from Torino on the A4 till. Turn off with direction to the North to Gattinara and Borgosésia.

ALAGNA - Rif GNIFETTI
Most climbers from the Italian side stay over at rif (Cottage) Gnifetti or rif. Mantova on the way to Monte Rosa. Read more on Vincent Piramide

The Northern side belongs to Switzerland and here there are the greatest glaciers of the region, like the Gorner Glacier (Gornergletscher), which is the second of the Alps with its 65 sq.km and runs down to Zermatt valley (Mattertal)…so on, the Grenz Glacier (Grenzgletscher) and the Findeln Glacier (Findelngletscher).
Smaller are the Italian glaciers: here the most important is the Lys Glacier (Ghiacciaio del Lys or Ghiacciaio di Gressoney) with 10,78 sq.km of area.

Some valleys plough the Group’s feet: in the Southern (Italian) side there are the D’Ayas Valley, Challant Valley (with the Evançon stream), the Gressoney Valley (or Lys Valley), the Valsesia and the Anzasca Valley (with the Anza stream), and more to East, also the Valturnanche, next to the Cervino (Matterhorn, m. 4478) and Grandes Murailles; in the Northern (Swiss) side there are the Mattertal Valley (where Zermatt is situated) and the Saastal Valley (where Saas Fee is situated).
One of the most fascinating aspects of the Group, and probably in Europe, is the Eastern Face of the Monte Rosa: the highest in the Alps. It’s about 2470 meters height from the end of Valle Anzasca to two of the highest peaks of the Group, as Nordend and Zumstein.
Seen from Macugnaga, the face seems a steep and colossal wall. In its verticality is also possible found one of the longest colouir of the Alps: the Canalone Marinelli. It's simply a magic: an Himalayan wall in the Alps.

In the Group, in particular between the Nordend and the Dufourspitze, there is the highest alpine saddle of the Alps: it is the Silbersattel (Sella d’Argento) and with its 4517 meters height runs in Swiss territory.

Vacation places around the Monte Rosa are Gressoney-la-Trinité, Alagna Valsesia, Macugnaga in Italy and Zermatt in Switzerland. The Italian side of the Group is included into the Parco Naturale Alta Valsesia (High-Valsesia Natural Park) and it represents restriction in the area due to the beautiful natural reservation protected.

Still in the Italian side, the Group is center of important meteorological observatories and naturalistic laboratories.
The most important and frequented ski-lifts and cable-lifts of the region lie in the Piedmont (Italy) side of the Group: famous is the Punta Indren cable-railway from Alagna Valsesia, which allows to reach the main Refuges and Bivouacs of the Group and its peaks. Other important lift ways are the Gornergrat from Zermatt in Switzerland and the Gabiet from Gressoney-la-Trinité, in Valle d’Aosta (Italy).

The high season is from the middle of July to the middle of September. In the Winter and Spring it could be very nice to go cross-country skiing around Monte Rosa-peaks, and even climb some like Signalkuppe or to the saddle west of Dufourspitze at 4500 meter. Climbing the peaks in Winter is possible if you can handle may be 25-35 degree below zero celcius.

There are 115 hotels in Zermatt and a lot in Alagna. On the way up from Zermatt most of the climbers stay over at Monte Rosa hütte. From Alagna climbers go to rif Gnifetti at 3647 m - or rif. Mantova few meters lower.
You can camp in tent from 100 meters upside the Monte Rosa hütte. It is forbidden to camp on the pasture-land around Zermatt.

Alpinism history of Monte Rosa begun in 1778, when seven Italian people from "Gressoney" went up from south side to discover the mythical lost valley: they believe that over the mountains and the ridges existed a paradise, with animals and fruit-threes, ancient home of their flintstones. The higher point to reach by the seven people (at about 4000 meters) was called "stone of the discover).

Anyway, the “recent” history of the mountaineering on the Monte Rosa is firmly linked to any Italian priests: the former official climber to who belongs the first Monte Rosa ascension was in fact the Alagna Valsesia’s priest, Pietro Giordani. He reached 4046 meters of height on 1801 (today the same place is called Punta Giordani, m. 4046). To Joseph Zumstein belongs the ascension to the Zumsteinspitze 4563 meter in 1819 and to N. Vincent belongs the ascension to the Piramide Vincent 4215 meter in 1819 again.

Rev. Giovanni Gnifetti, joined his name to many peaks of the Monte Rosa. In 1842, he reached the Punta Gnifetti - Signalkuppe (the earliest Punta del Segnale). In 1861, another little English expedition (Buxton and Cowell) reach Nordend with two Italian guide.
Only fifty years later from the first ascension, in July 1855, an English expedition (J. Birkbeck, C. Hudson, E. Stephenson, J. and C. Smyth) with Swiss guides, reached the highest summit of the Monte Rosa range.

The first difficult route, the Nordend East, was climbed by an Italian expedition (the guide-master was L. Brioschi) on 1876, and followed some other expeditions by other difficult itineraries.
The first winter ascension belongs to another Italian expedition (L. Bettineschi, F. Jacchini, M. Pala e L. Pironi) on first February 1965.

The origin of the name “Rosa” is lost in the beginning of times.
On the name there’s no any legend but only histories and histories…
One of this history tells the name comes from the beautiful and enchanting colour, the pink (pink=rosa), that the mountain wears on its wide glaciers and snowfields before the sunset and during the sunrise: it’s not difficult to see Monte Rosa from the Pianura Padana or from the Valleys to its feet, inexplicably big and magic, even if it’s very far from town like Tourin or Milan and it seems float on a thin layer of air and sweet clouds.
Then, when the sun goes down, the last rays of light give a strange colour to the these mountains and the pink reigns onto other colours.

The second and more likely tradition attributes the name "Rosa" from the old Vallisian and Walser dialect "Roisa" as "glacer". Also in franco-provencal “patois”, spoken in Valle D'Aosta, the name “Rosa” comes from that word next to “rouèse” and this ancient noun, with “rösa”, meaning “glacier”.