Manly Beacon-- Back to Where It All Began
California, United States, North America

Manly Beacon-- Back to Where It All Began

A Return to Roots 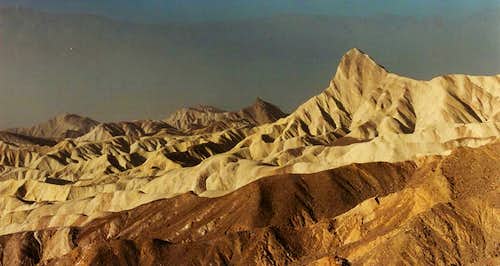 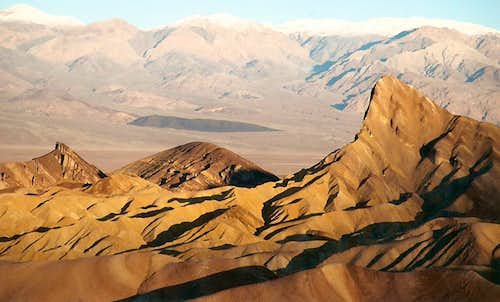 ...of Manly Beacon from Zabriskie Point.
About four years ago, I climbed Manly Beacon for my third time. It was, as always, an enjoyable and spectacular hike, but nothing exceptional occurred. However, it did stir memories of my introduction to the peaks of the American West, and appropriately so, for it was on Manly Beacon that my adventures there really began.

It was April 2, 1996. My brother Chris and I had flown into Las Vegas late the night before and driven to Fitzgerald’s, where we stayed the night in an upper-floor room, using a half-price coupon I had. We spent a little time in the casino, where I got a few bucks ahead at the blackjack table and quit, declaring victory. I blew my meager profits on a drink and headed upstairs to get some rest in anticipation of that for which we had truly come-- no, not a day at one of Nevada’s infamous “ranches” but rather a tour of the Southwest that would take us from Death Valley to southern Utah to the Grand Canyon and the Petrified Forest to White Sands and through Arizona’s saguaro and organ pipe country before our return to the City of Sin and a flight back home.

At dawn, I looked out the window and beheld what I had not seen with my own eyes since the age of two, what was no more than a blurry impression lurking beneath the concrete parts of my memory like a strange fish in murky water occasionally coming close enough to the surface to provide a vague glimpse of its form: the West.

Jealousy had played no small role in my being there at all. At one time, I actually had the crazy notion that, however beautiful the West surely was, I had no need for anything beyond my beloved Blue Ridge of the Southeast. Surely, the seasons’ many different faces, the countless waterfalls tucked into deep, dark hollows, the misty ridges and rugged outcrops, and the folksy charm and connection to the past were all I would ever need of the mountains.

But my girlfriend, then a senior in college and now my wife, had been talking a lot about a post-graduation trip she wanted to make with one of her friends, and their idea was to spend several weeks traveling the West. As she talked about all these places she planned to see without me, I started itching to go out there myself. Plus, ever since I’d studied U.S. geography back in grade school, when for a class project my group had the Intermountain West and I had Arizona, New Mexico, and Montana in particular, I’d nurtured a wish to stand with my feet in the Colorado River at the bottom of the Grand Canyon, gaze on the otherworldly spires of Bryce Canyon, and soak in the heat at Badwater Basin in Death Valley. So I called my brother and asked if he wanted to hike the Grand Canyon and see places like Death Valley, Bryce, and Zion; he said he did, and in short order, we planned a two-week trip for my spring break at school (where I was teaching, not studying). 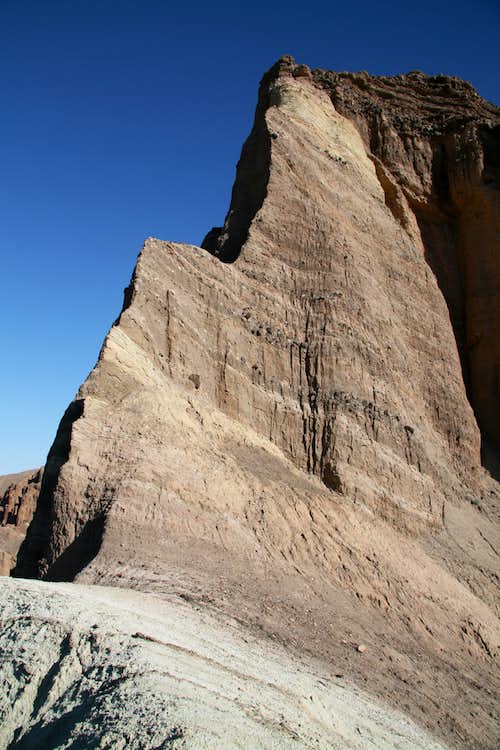 The Cliffs of Red Cathedral
And so it was that Chris and I were driving northwest on U.S. 95 through Nevada, headed for Death Valley National Park as our first stop. The scenery, to our Eastern eyes, had already been impressive enough, but once we actually reached the park itself, we thought we were in another world. Then we reached Zabriskie Point.

I’ve been to Zabriskie Point many times now, and although the crowds often there can make the place seem like a circus, the scenery there still enthralls me so much that it’s almost impossible for me just to drive by. But that first view was something else entirely. It was a revelation of a landscape I never could have imagined, a landscape that seems more like something from a science fiction or fantasy movie than anything from this world of air conditioning, cell phones, and laptop computers. And above it all, like a shark’s tooth or a dagger, rose Manly Beacon, which I must have photographed about 20 times within the span of 5 or 10 minutes. I just couldn’t believe what I was seeing.

We eventually left and headed on to see Badwater and the sand dunes near Stovepipe Wells, but late afternoon brought us back to Zabriskie Point, and the golden ridges, starting to glow in the light of the lowering sun, drew us to them, and Manly Beacon seemed to be the epicenter of that force. Although there is no official trail to Manly Beacon, not even to the base of the route people take up it (though there are sometimes cairns in the wash that is the key to the approach), it was not hard to find our way to the end of a wash surrounded by red cliffs (Red Cathedral, I would learn some years later), and then we scrambled to the saddle between those cliffs and the narrow ridgeline of Manly Beacon and followed that crumbly ridge, really a knife edge in places, all the way to the small summit, where the late-afternoon colors on the badlands and the views west of snowy Telescope Peak, which I'd return to climb the following spring, and the great salt pan of Death Valley made me gape and exclaim my amazement.

Manly Beacon is only around 800 feet high, it is not really a mountain, and it is only about two miles from Zabriskie Point to its summit (although it’s very steep at times). But this put me on top of a new world, and I was hooked. Nothing has been the same since.

By the way, my girlfriend never did take that trip with her friend. Instead, we went together, spending three July weeks making a grand tour that included most of the Desert Southwest (from Death Valley through Utah and Arizona and all the way to Big Bend), the Colorado Rockies, the Sierra Nevada, and the California coast. Such trips have become a staple of our life together, and they ground, refresh, and inspire us at the same time. And we're getting our kids into the same habit.


But it all started on that sandy pinnacle called Manly Beacon.

I love reading these kind of TR's. I would have never heard of this place was it not for your page about it! That crux section with the big cobbles was kinda scary!

Imagine the fun when I took my kids up it a few years ago: http://www.summitpost.org/dad-tries-to-kill-us-on-manly-beacon/769575

Thanks, Arthur-- nice to hear from you.

I have considered tackling Manly Beacon, but haven't gotten around to it yet. I have done lots of interesting scrambles in the Golden Canyon/Red Cathedral area and elsewhere in DVNP, some with my kids. With them along, I have had a few nervous moments on exposed scrambling routes. An unexpected feeling of need for rules, hand holding, carrying, and strong words of caution came into play the first time they ventured off the benign, beaten paths (sometimes just feet away). I've observed that the spicier routes are irrestible to many kids (of all ages) there. Indeed, onlookers often can't stand to watch, especially moms, dads, and grandparents.

Re: I can relate!

Sean, I can relate to that as well. A couple years ago, I took two of my kids up Manly Beacon-- http://www.summitpost.org/dad-tries-to-kill-us-on-manly-beacon/769575

When we got to the summit, we were able to look down into Golden Canyon and to my wife and my parents below. My mother was terrified.

Those same two kids are getting more and more into climbing as opposed to hiking. The oldest especially finds trails boring, but when we leave the trail and head off on some scrambling route, he comes to life.

It bodes well for the future. I can't wait until they can belay! Finally, a use for kids other than getting out of social engagements you don't want to attend!

Re: I can relate!

Ha! I read both reports back to back and my response above was intended for the trip with your kids. I think I read at least one of your other recent reports as well. Fortunately, my experiences traveling and hiking in the west began in elementary school, but, similar to you I have always loved maps. My best wilderness adventures have come after meeting my wife, whose family frequents Yosemite and lives near SEKI. My tendency to travel far from my vehicle and off popular trails developed soon after. That tendency has helped make DVNP a place worth visiting many times over after missing out on its beauty prior to five years ago. My kids taking after me there is enjoyable in many ways, but unnerving at times. Anyway, I'd say scrambling above Golden Canyon on one of my first hikes there is a large part of what began the inspiration for return trips.