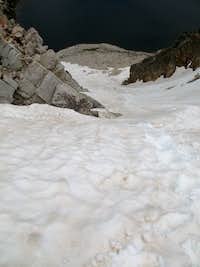 Looking down from near the top

How many places are there where you can climb about 900' of moderate and steep snow up a narrow couloir, have an approach of literally just a few minutes, yet see nobody else climbing?

Probably not too many.

But one such place is "Marie Couloir" (my name since the couloir is directly above Lake Marie), almost at the south end of the Medicine Bow Peak massif in Wyoming's Snowy Range, a part of the Medicine Bow Mountains named not for all the snow there but for the whitish quartzite that makes some of the cliffs here positively shine even in overcast conditions.

I don't know why there aren't a lot of other climbers here. The area is popular (mostly with hikers and fishers, it seems), easy to access, and not far from major population centers such as Laramie (Wyoming) and Fort Collins and Denver (Colorado). I have seen skiers on the couloirs out here (and yes, I know the skiers climb up there, but I'm talking about people who are out just to climb). I know from Web searches that people climb the couloirs here just for the sake of climbing and that people climb the big rock faces. But I have done summer climbs of six couloirs out here and some of the rock formations and have never once seen another person on the routes. I have seen a few ski tracks, but I have not even seen signs of kick-steps, crampons, and ice axes. Maybe the busiest climbing time is in the spring. Maybe the bigger peaks close by in Colorado draw all the attention. Maybe, although people do climb here, there just aren't many of them. It's nothing to complain about. 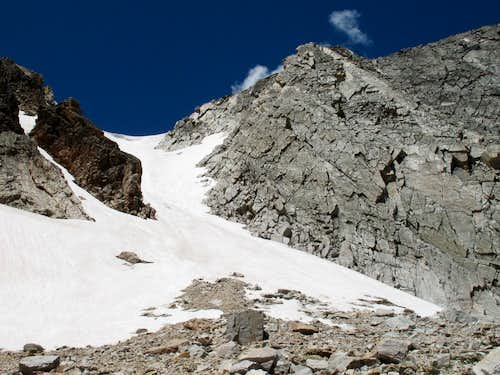 On WY 130, park at the Lake Marie West parking area. This is 26 miles east from the intersection of WY 130 and 230 south of Saratoga, and it is 15 miles west of Centennial. If you need to preview the couloir, drive a short distance east of the parking area until you can see the couloir well. 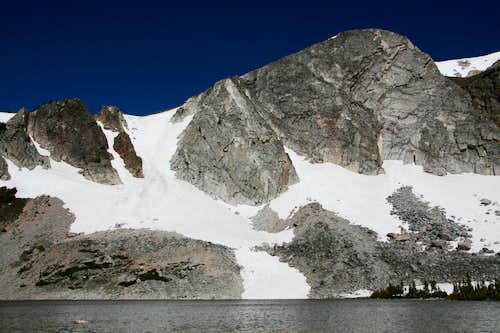 View from the road

One-way distance from the Lake Marie to the top of the couloir is approximately 0.7 mi; elevation gain is about 900', and almost all of it is over 0.4 mi. In late spring and early summer, the snow usually reaches all the way to the lake's waters; falling on this route might turn into one hell of a way to cool off on a hot day. Snow in the couloir starts at around 40 degrees and can be close to 60 at the headwall.

At the trailhead, do not get onto the trail that climbs Medicine Bow Peak. Instead, walk to the shores of Lake Marie and traverse to the base of the couloir, which is obvious and is the first major couloir you reach. If you somehow miss it and find yourself passing a sheer rock face (this is called The Diamond), you have gone a little too far.

If you have looked at this page's pictures and/or have studied the route from the highway, you pretty much have to be an idiot not to find the couloir. 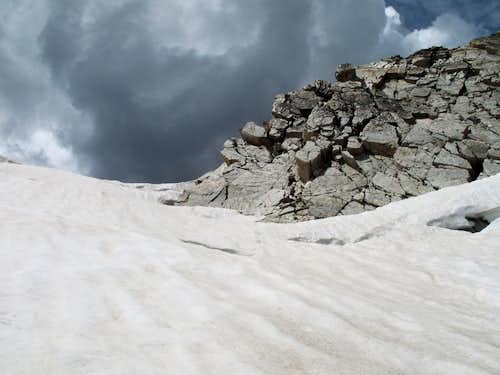 Remember to check the weather first...
Anyway, from the lake to the base of the couloir, the distance is about 0.3 mi.

Look up, grab your stuff, and climb. You be the judge of when to put on your crampons, if you put them on at all. I put mine on about halfway up.

Before you enter the narrower upper section, a second, much narrower couloir branches off to the left. I did not climb this, but it appeared steeper than the main couloir. It also was shorter, and the top was melted out, cutting out some of the snow-climbing aspect of the route. 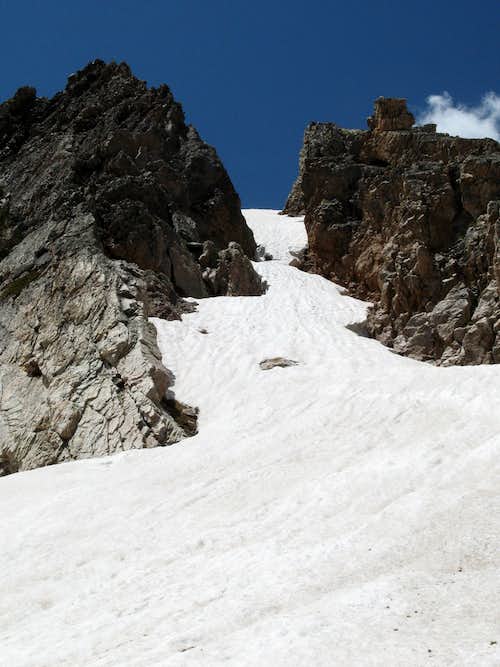 Variation
Up top, walk a few yards to pick up the trail and either return to the trailhead or hike on to Medicine Bow Peak's summit, still close to 2 miles away. Or traverse north along the rocks and glissade down one of the other couloirs on the mountain, and then head back to the trailhead. 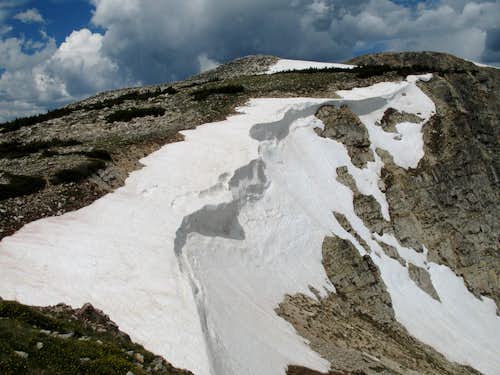 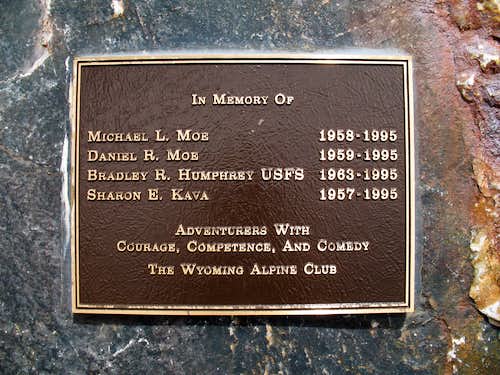 Ice axe, crampons, and helmet-- should go without saying for steep snow and narrow, rock-bound couloirs, but I'm saying it anyway. 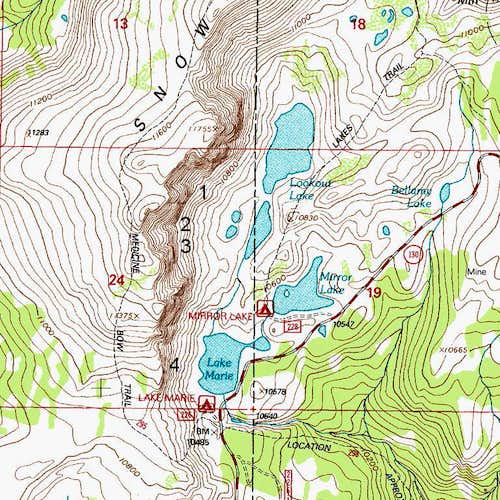