Misery on Moran: The tale of a spanking in the Tetons 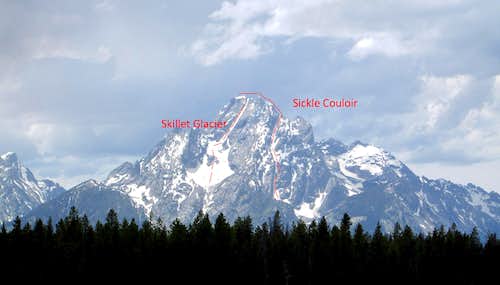 Our plan for late June 2013 was to climb the Sickle Couloir on Mt. Moran. The Sickle route is 3000 feet of steep snow and ice followed by several pitches of scrambling and easy 5th class rock. It sounded awesome. Even better, it sounded like it was rarely climbed. We thought we had found the perfect route to the summit of a beautiful mountain.

We showed up with a borrowed canoe, prepared to paddle the 2.3 miles across Jackson Lake from Signal Mountain Campground (mileage stated by the guidebook). Turned out it was 6 miles across the rather frightening lake and hugging the shore for safety added another two miles to the undertaking. The 8 miles of paddling against headwinds and surging waves was not something we were necessarily trained for.

But we got through it and landed at the base of the Sickle Couloir with just a few twinges in our backs and shoulders.  Behind schedule, but still optimistic, we shouldered our packs and set off into the timber. The guidebook had mentioned some bushwhacking. In my considerable experience of bushwhacking in Wyoming, this usually means squeezing through pines and climbing over deadfall. We were mentally braced for that. What we actually found was a mile or more of 8 foot tall nightmare bushes that seemed to be a cross between willows and rhododendron. They had the thin springy tops of willows and the thick woody stems of rhododendron and squeezed in between them were plenty of wild raspberries and other stinging plants. All of this was wet.

Driven on by a hard desire for the route and plenty of reckless optimism, we battled forward with our heavy alpine packs full of snow, rock and ice gear as well as camping stuff. We were soon soaked, covered in sticky sap and pollen, bleeding, frustrated and exhausted. After three hours, Bill convinced me to stop by pointing out that we had travelled only 2/10 mile from the lake (!!!).

We headed back down, which wasn’t any easier. Then we paddled the 8 miles back across the lake, racing a storm for most of the way. It caught us at the end and the waves and rain scared me so much that I insisted on taking out before we reached the boat launch. We then had to portage the boat and all our gear to the launch. I wasn’t happy. I hated the mountain. But I couldn’t take my eyes off it. I sat with the boat while Bill went to get the car and was soon plotting to go up the Skillet Glacier. By the end of the night, I’d convinced Bill it was an excellent idea. It would be awesome.

Since the book mentioned a “pleasant” walk through old-growth forest, we decided to approach the Skillet from Bearpaw Bay. Much as I didn’t want to endure the tedium and backache of paddling back across Jackson Lake, I decided it was worth it for another shot at the summit. But when we went to get our camping permits, the ranger on duty advised against doing it this way. He told us to approach as if for the CMC route – up the Falling Ice Glacier drainage. This, he promised, would be much easier. No chance of bushwhacking. We were sold.


So after a day of rest, we launched the canoe again, this time at String Lake. It was shallow and smooth and pleasant – so much nicer than Jackson Lake. The portage to Leigh Lake went well, as did the paddle across to the Falling Ice Glacier. Our optimism soared. Nothing would keep us from reaching the top of that mountain.

The hike up the drainage was reasonable, if steep. We had planned to camp on the saddle at 9800 feet, 3000 feet above the lake. But as the sun beat down and temperatures went up into the high 80s, I started to get blisters from hiking in my heavily insulated technical ice boots (the only boots I had with me, intended for the Sickle). We decided to stop at 9400 feet and do the rest in the morning. There are no flat spots on this side of Moran, but we found a steep snow patch and carved a tent platform out of the 40 degree snow.

We went to bed early. I fell asleep right away but Bill woke me an hour or two later, getting up to use the bathroom. After that, I couldn’t sleep and lay awake fretting about the route. It wasn’t clear how we would get to it from where we were and I knew we’d be up there groping around in the dark. I lay awake until the alarm went off and got up feeling a bit sick.

We left the tent around 1:30 a.m. to give us plenty of time to sort out the approach. However, it wasn’t time enough. We continued up to the shoulder on miserably steep damp grass and talus and then descended steep crappy snow. We got onto the cliffs and started picking our way up and across, trying to find the Skillet. We ended up about 500 feet up on the cliffs, climbing exposed slabs and ledges in the dark. I kept feeling sicker and both of us were pretty demoralized by not knowing where we were or if we would get cliffed off. We were moving slowly, groping around as I expected, eating away our margin of safety. I didn’t want to be on the Skillet for too long after dawn because it was supposed to be hot again and I was afraid of avalanche potential and/or slippery crappy snow conditions coming down. If you slip and don’t recover on the handle of the Skillet, you slide right into the gaping bergschrund awaiting you at the bottom.

Long story short – we eventually turned around. We reached a deep drainage that seemed impassable in the dark and it looked like we’d have to climb down into it and descend quite a long way to get around. We figured that by the time we did all that and worked our way back up, it would be too late to start up the route.

We went back to the tent, lay down for an hour or so, then packed up and hiked out. The heat was incredible and I got dangerously dehydrated on the way down. It turned out we were in the middle of a record-breaking heat wave, which we hadn’t heard about, being completely unplugged. Studying the mountain later through binoculars, we saw evidence of two avalanches on the glacier.

The steep 3000 foot descent was a real quad-buster with the heavy packs and following our early morning workout on the cliffs. I was half-dead by the time we reached the canoe, but luckily Bill had stashed some water and revived me. I sat in the lake for a while. I wasn’t happy. I hated the mountain. But I still couldn’t take my eyes off it. As soon as I cooled down, I started contemplating the CMC route. It was time to go home but maybe we could come back next month. In fact, we probably will.

And it’ll be awesome.

In late July we did indeed go back and finally tagged the summit. We did a variation of the CMC route and everything went perfectly. Reasonable approach, non-scary climbing, mostly great weather and nothing chewed up by marmots. In other words, a trip that would make a very boring report.

But it was certainly awesome! Jackson Lake is a scary place during an afternoon thunderstorm. Been there, done that... once.

Re: Canoes and climbers

The CMC route is great so stick with it! Nice trip report...

Thanks Rob. We're definitely going back.

Growing up in the Appalachians of VA, I've always laughed at the Wyoming version of bushwacking. But there are some areas like in your pic, that can be real killers! Still not at thick as some ridiculous rhododendron groves I've pushed through in the east.... ;)

I've schwacked through forests in Tennessee and Arkansas and I once did a rhododendron grove in Georgia that scarred me for life. But I swear this stuff at the base of Moran is worse!

Living in what is essentially a desert in southern California... What is bushwacking? Ha ha ha

Really though, I am so thankful for my chaparral scrub sometimes.

I tried to descend Pamola via Keep Ridge( the east ridge) before there was a trail. The first 1000 feet of descent was enticing but after a 1/2 hour in the krumholz had to give up and going back up seemed easy.

Re: In my youth

I had to google "krumholz" :) Now I know there is even more to fear than rhododendron.

Re: In my youth

Oh yeah! Thick extended periods of krumholz is brutal! Recently did a ridgeline full of the crap, between knee and waist high. My biggest problem with it is the rocks, crevices that it hides....more than once I've walked through that crap only to hit gaps and punch through.....good times in hindsight! :)

Very nice writing style, very entertaining tale. Best of luck the next time you attempt this...

Thank you very much, jbonbright.

I really enjoyed your story (it was REAL) and pictures; especially the Skillet Glacier and Sickle Couloir routes and lake pictures. Bushwhacking really slows you down. Yea, sometimes when I cannot reach my goal (summit), I feel bad about it, but in later consideration, I still enjoyed the adventure. YOU all had options, and a backup plan and above all determination and strength. I say you all did great !

Thank you traddad58! I do agree that the adventure and the experience are more important than the actual summit (though the summit calls loudly!).

I really enjoyed your TR, maybe because misery loves company. I've had two attempts on Moran to try to ski from the summit. First one about the same time of year back in the 90's from Bear Paw with the "traditional" Wyo bushwacking and ultimately got turned back with snow too soft after spending "fright night" in a huge thunder storm. Second attempt was this past winter and got turned back due to equipment problems and technical issues with skinning up such steep terrain, but skiing was great.
I have a love/hate relationship with Moran, But like you, I WILL be back! :-)

Thank you dblblack and I'm glad to hear you're going back for more! Are you trying to ski the Sickle?

Not the Sickle, but the Skillet, so that I can ski from the summit. Both times i was just at the start of the handle, and of course this winter I was able to ski back down to the lake.
I think everyone that skis the Sickle just climbs and skis it. Although i think i remember an account from someone, maybe the late Steve Romeo (Randosteve), and a partner skiing from the summit and dropping in. That is way out of my league!!