Mt. Moran via CMC: It was not to be.
Wyoming, United States, North America 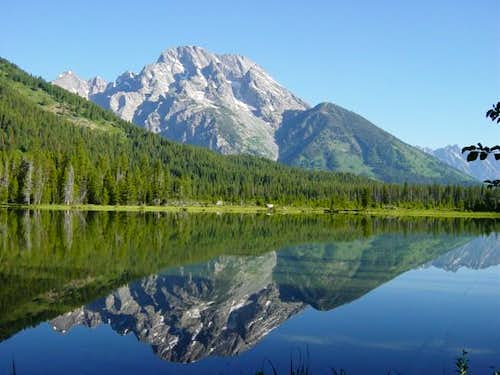 Mt. Moran has intrigued me for years. Mostly because it is a huge mountain with a moderate technical route. The CMC route in particular has fascinated me with a 1000 foot face of 5.4 climbing. I had seen Mt. Moran on several trips to the Tetons and hoped someday I would get the chance for an attempt on this spectacular peak.

Mt. Moran should not be taken lightly. For the Tetons, it is a remote peak with a committing, time consuming approach. Unlike the central Tetons, help or rescue is not close or quick. The easiest route is 5.4 and the CMC (named for the Chicago Mountaineering Club) is considered the hardest “standard” route in the Tetons. However, the rewards of this mountain are many. It’s remoteness scares away the crowds of the central Tetons, giving solitude not found on many of the other popular peaks. The CMC campsite (base camp) has been described as the best in the range, and the route itself considered a classic alpine line with terrific exposure and unsurpassed views.

With this information and optimism in tow, we (Jackie and I) embarked upon our Mt. Moran journey via a canoe across String and Leigh Lakes. The canoe across the lakes to the base of the mountain is one option for beginning your climb. The other option is to hike/bushwhack around the north end of Leigh Lake. The canoe is the preferred method to reach the base. The hike around the lake is via an abandoned Park Service trail with much down-fall and obstacles. Some years, in late season, the lakes are dry enough to walk across. This year, however, we enjoyed the canoe across a glass mirror of String and Leigh Lakes. There is a portage between the lakes which is not difficult to find and we lugged our canoe and packs up the 100 yard trail.

As you ‘round Boulder Island and the “point” on Leigh Lake, the entire mountain comes into view. It’s immensity is evident as it rises from the lake shore to the summit. Immediately after the “point”, one can see the obvious destination, the talus filled creek bed gully which descends from the Falling Ice Glacier and the twin horns of Moran’s east face. Our canoe took about 90 minutes from put-in to the base of the mountain.

Upon arrival at the west shore below the mountain, the steep 3000 ft gully greeted us. We pulled our canoe high up on the shore with two other canoes already there. Looks like we would have company at the CMC camp. A snack of Clif Bars was in order before beginning our climb. The hike starts through the talus-filled creek bed via no trail, basically walking from rock to rock. The beauty of the area was a consolation to the steepness of the gully. A faint path sometimes appeared between the rocks. Eventually, a climber’s trail appeared on one side of the creek and changed sides frequently to avoid waterfalls, etc. I don’t know what it is about Clif Bars, but I began to become nauseated soon after eating our snack at the lake shore. Nausea with the sun/heat did not make a good combination, and I was not moving very fast as a result.

After five hours, a couple of vomiting sessions, and 2000 ft of talus, sand, scree, and other unpleasantries, we began to look for the trail to the CMC camp. We spied the trail heading up a grassy slope on the left side of the gully. We crossed a huge moraine and began the remaining 1000 foot climb to the ridge line where the CMC campsites held respite from our misery. The climb to the CMC camp was unrelenting and difficult in my ill condition.

Arrival at the CMC campsite was with joy. It is in a beautiful alpine setting, above tree line, but still in the trees. The campsites sit on the only level area of the mountain, on top of a ridge which leads directly to the CMC face. It was worth the climb just to see this place. A while was spent enjoying the views and recovering from the ordeal of our approach. A couple of climbers showed up and began to describe their day. They were three parties of two and it took them 14 hours to climb from the CMC camp to the summit and return. The climb to the CMC camp is 3000 feet, then there is a 1500 foot scramble to the face, and finally 1000 feet of 5.4 on the face. It was going to be a long day if I didn’t start feeling better.

Since the CMC campsites are the only level place on the mountain, they get a lot of use and the impact is evident. It became more evident when the wind began to howl before sunset. The wind blew dust and dirt into every nook and cranny imaginable. We build a rock wall in front of the tent to keep the dirt and dust out of our tent, food, etc. Dinner was a gritty mess of sweet and sour pork and dirty Gatorade. Things appeared worse when I discovered we had no remaining water treatment drops. Somehow, I had forgot to check the status of our water treatment and subsequently ran out while making the first quarts of water. With my hat in my hand, I reluctantly begged some iodine tablets from the other climbers who were preparing to depart the mountain.

The howling wind was our nighttime companion as I continued to fight the nausea which plagued me the day before. Laying in my bag, I was not looking forward to a day of illness on the most challenging part of the mountain.

Up at 4:30 am. Both of us are now sick as dogs. I have nothing in my stomach from several sessions of violent vomiting. We sort climbing gear, hoist our day packs, and head up the mountain. We arrive at the upper CMC campsites about 100 yards and 500 feet above our campsite. A few more vomiting sessions are in order upon arrival. A cliff band greets us on the right and a huge snow slope is on the left. The trail up through the cliff band is faint in the dark, but we managed to follow it to the chimney system leading up to the ridge. The snow slope option is recommended if you have an axe and crampons. I began to lead the chimney system and stopped about halfway up and sat down. I looked at Jackie and she looked at me. We both knew it was over. With illness, and lack of energy and desire, I knew this climb was not going to happen. We turned around and headed back to the tent, packed up, and headed down. Unfortunately, our permit was only for two nights, so we knew we could not wait another day. It was today or nothing. Our descent was uneventful and was about three hours to the canoe. Nausea stayed with me the entire descent and it wasn’t until later that day that it subsided.

Mt. Moran is a peak which demands respect. For this reason, you should have 100% health, fitness, and desire before attempting it. The mountain was telling us that this was not a good day for us to climb and we acknowledged that. Although we were disappointed for not summiting, we knew the mountain would always be there and we would someday return and make another attempt. It is too spectacular of a mountain to ignore. Thanks to Mt. Moran for the experience and for our safe approach and descent. I can’t wait to try it again ((Which I did in September 2005).

View Mt. Moran via CMC: It was not to be. Image Gallery - 1 Images