The Skillet - Winter in the Tetons

As most readers know, the Teton Range is no joke. The range is quite small as a sub-range of the Rockies... But what it lacks in length, it makes up for in it's terrain, prominence and elevation. It's no wonder why 3 of the '50 Classic Ski Descents of North America' are found within the Tetons. I was turning 29 years old on Wednesday (2/19/20), so I really needed to start the year off doing what I loved. On the Monday before, I was scoping the weather & ranges around Salt Lake to see what I could find. February was disappointing in the local Wasatch, but further North.... The snowpack in the tetons was DEEP, after a massive January and a decent February. As a bonus, it had dumped right-side-up powder over the weekend and the forecast was predicted to be cold & sunny. These are quite possibly the best conditions to ski anything during a winter in the Tetons. Luck & patience is important here. My thoughts instantly gravitated towards skiing off Mount Moran, a NE/E fasting line down the Skillet Glacier. Fortunately, these aspects tend to stay good, even after a few days of sunshine, unlike many lines in the Tetons, which seem to generally face East, South, West. An internet search of Mount Moran is intimidating to say the least: 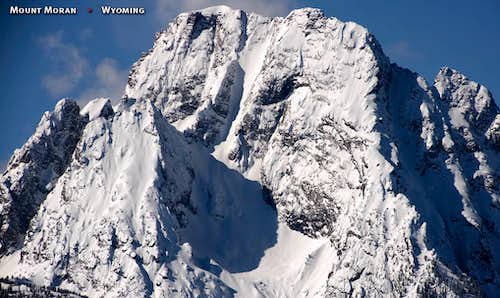 The Skillet is one of the longest continuous shots in North America, ~6000' of pure bliss, ranging from a maximum slope angle of 50 degrees in low snow years, to 30 degrees at the bottom. Most of the line really sits in the 40-45 degree range. No question about this one being a classic. It took a single text message to convince my buddy, Nick, to take off work and cancel all his weekend plans. He agreed with my assesment that now was better than anytime to hit the Tetons, the excitement was high. Grateful for motivated partners, as most know, they can be rare! Hang on to them. We had another buddy, Ross, also heading to Jackson, so the plan was to climb as a party of 3.

In winter, access is rough in the Tetons. The lakes are frozen, the roads are frozen and essentially everything else is frozen. Reaching the summit would entail a 22 mile round trip journey, 14 miles across a frozen lake and another 8 to reach the summit and ski down. Most parties climb the skillet in two days, or approach via boat in the spring/summer. Snowmobiles are highly discouraged for skiers & climbers, although it sure would have been nice :) Our plan was to make it a daytrip, preferring the 'Fast & Light' approach, as it's how we do things here in the Wasatch.

On our drive down, a quick internet search at temperatures on the summit.... +20 degrees at 12,000', pretty reasonable and pleasant! What a grave miscalculation we made.... Whoops. Turns out, Jackson is infamous for it's EXTREME inversions. I don't mean a few degrees of inversion....

Note: This photo was taken at my truck at 3PM, after we had climbed Mount Moran. Yikes. Lesson learned. As we were driving down Wednesday night, we noticed the temperature gauge dropping rapidly.... 0 degrees, not so bad..... -10 degrees, uhhh...., -25 degrees, shit! I've only experienced cold at this level at 14,000' in the Alaska range one of the coldest places on earth. To see a -25degree temperature reading at the 6000' elevation in the rockies was a bit baffling. 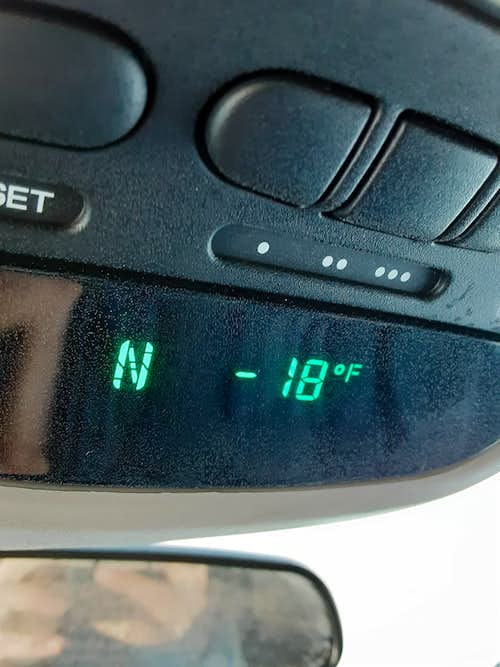 We decided on a start time of 3AM, assuming this would give us enough time to get to the summit before the east facing aspects were baked by the sun we were expecting the next day. Reaching the Colter Bay at 11PM, we got in the back of my truck and had a 'pleasant' 4 hour nap. At 3AM, we quickly got into my truck, blasted the heat and discussed that the temperatures might be a bit much (or little, however you want to look at it). Our third partner, Ross, hopped in the truck, he had a rough night and was fretting over the temps as well. Ross has issues with his circulation in extremities and had some serious doubts about being able to tolerate the extremes. After we put on every layer we had, we got out of the truck and started skinning across Jackson Lake. The standard routine is to start in light layers and add as you go... Not this time. The cold was so intense, our eyelids were freezing shut. It was going to be a long night.... 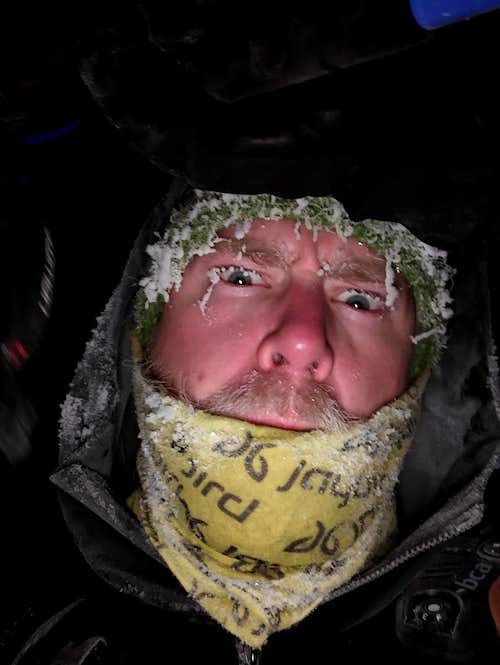 Within just five minutes of skinning, our buddy Ross said he couldn't handle the temperatures and made the call to bail. We were pretty gutted for him, as we knew today was going to be epic *once the sun came out*. Now down to a two-man team, we continued skinning fast to stay warm. We were breaking trail across the lake in ankle deep snow. While tiring, the lack of sleep and cold temps were really all we could think & talk about. Conversation went like this: 'Hey dude, it's really cold', 'Yeah dude, it's REALLY cold'. It was a very silent 7 mile skin across the lake. In the distance, we could make out Mount Moran, it never seemed to get closer. Finally, we reached the opposite shoreline around 6AM, and temperatures really started to plummet... Our estimates were that it probably dropped to -30 or even -35 fahrenheit at this point. As we were reaching our tolerance for the suffering, the sun finally started to make it's way up, the mood switched, just like that! 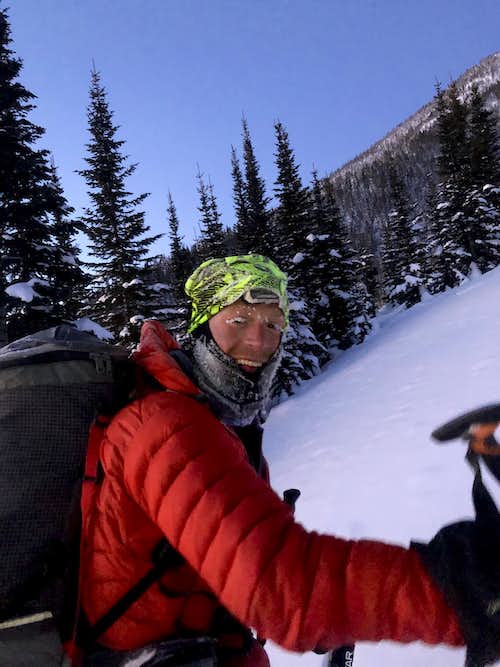 We found our way into the main slide path and above us loomed one of the greatest ski lines we've ever been underneath! Less intimidating than internet photos, but still a beast nonetheless. No previous ski tracks, I wonder why? *eye roll*

From here, the route was straightforward and our progress was quick on skins. We stayed to lookers left going up the glacier, as we knew the sun was going to wreak havoc on the cliffs & walls facing south (lookers right). Sure enough, the sun did what it always does. Minor sluffs began ripping down the face, which certainly adds a 'pucker' factor. Despite the noise & intimidation coming from Moran, we felt safe on the other side. Below is an image of our ascent, for reference. Red line is our skinner, yellow line is our boot pack. 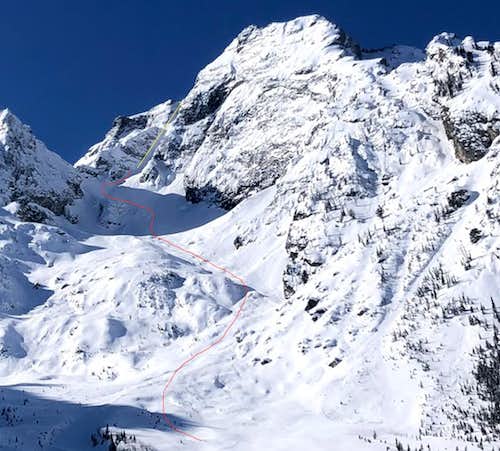 Once skinning was no longer an efficient option, we switched to our 'verts'. For those unfamiliar, verts are a pretty awesome tool for booting up steep powder snow... They are perfect for many of the ski lines in the Wasatch, where mostly everything is pretty 'non-technical', just very snowy :). While they add a weight penalty, they truly make these kind of lines possible. These ski mountaineer snowshoes are esentially just plastic with some webbing to cinch down to ski boots. I took a circular saw to my verts in order to shave off weight, my partners love to make fun of me for it. Light is right!

The snow was getting DEEP. In a few instances, we were wallowing in waist deep powder & movement became progressively slower. It became necessary to take turns 'putting in the booter' as the leader's heart rate would skyrocket each turn breaking trail. Despite the exhausting effort, we could see that we were getting close to the top and spirits were high.

Eventually, Nick started to feel the pain from our ascent... With about 600' to go, I miraculously got a second wind and broke trail to the notch, just below the summit. It was hard not to gaze at our line with a mixture of awe and pride! This was going to be one of the best ski runs of our life and we deserved this one.

At the notch, it was an easy and crunchy walk to a suprisingly flat summit. What a contrast from what we just came up!

From the summit of Moran at 12,605', we were rewarded with spectacular views of the bulk of the Tetons, to our south and more of the range to our North and West.

Although the summit was about 50 degrees warmer from where we started 6000' below (!!!), the 30mph winds did not make anything comfortable. We quickly tucked our tails and walked back to our sheltered ski line. Now to enjoy what we came to do! Enjoy the video :)

Happy birthday to me!! Hopefully starting my 29th year off right. 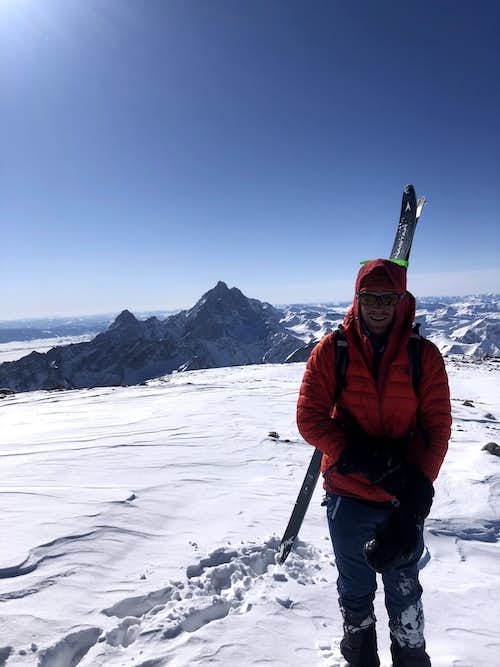 We choose reasonable safe zones and made it down to the bottom in quick fashion. The Skillet lives up to the hype. Although our legs were tired, it was impossible to ski the line without a GIANT smile. Towards the bottom, the terrain mellowed out and the snow just kept getting better. We took the path skiers right, as it was more NE facing and we predicted the snow would have been better to ski... It was :) Green line is descent.

After hugs & high fives, it was hard to keep our eyes away from Moran. The joke was: 'Okay, just one more picture!'

And now, time for our punishment :( Back in the cold temps, it was going to be a rough 7 mile skin out on VERY tired legs. As 3 snowmobiles zoomed off in the distance, we jokingly yelled 'HELP!!!'. Maybe not jokingly? :) I wouldn't have said no.... Unfortunately, our snowmobile friends either did not hear us, or did not care for the peasant skiers. Luckily, Nick is one of the most positive partners I have, he kept the good vibes going and we eventually made it back to the car, exhausted and happy. On the 20 mile drive back to Jackson, the Tetons let us know they are still there....

As if life couldn't get any better, we were graciously offered a place to stay by some friendly locals (Thank you Kia & Jack!!). The thought of sleeping in the truck again was not a nice one. After some delicious Mexican food, a 7$ hot-tub and sauna at the Jackson rec center, it was time to go into a coma. As for our first time in the Tetons, I would say we were extremely blessed and lucky to have reached such an amazing summit. Definitely an adventure I'll never forget, I smile as I write this Trip Report. For the readers who have experienced Teton magic, you know where I'm coming from... for the others, I hope you can make it to this place one day and have your own adventure! Thanks for reading!

Thanks Judy! It's fun to relive and definitely builds confidence to write more. Any criticism is greatly appreciated :)

Still need to work on learning to make the formatting look better, but HTML is tough!!!

Also, no highline this year :( seems like the snow wants to always come in when temperatures & conditions are ideal! Oh well, back to the tetons it shall be. Life is hard, hah :) hope you are doing well in the chaos.