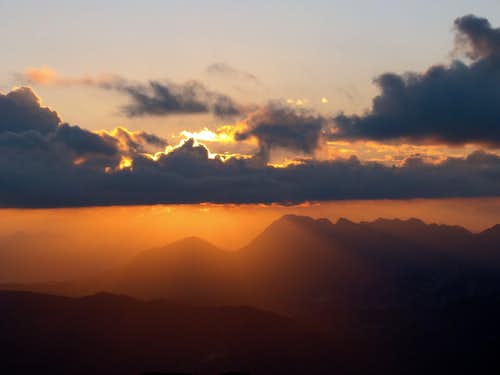 Killar - In colours of sunset 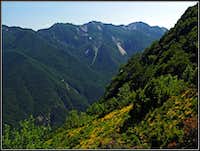 M. Chiampon from the N

Monte Chiampon rises on the very westernmost end of Julian Alps, just above the town of Gemona del Friuli. Long mountain crests, running in the west-east direction are characteristic for Julian Pre-Alps. So, also Monte Chiampon is a part of one such crest, the southern one, running from Tagliamento/Tilment river on the west till Torre/Ter river on the east.

Monte Chiampon's altitude is not high, and due to a good mountain road the summit can be reached in less than two hours, but it is still a real mountain, excelling first of all with a very nice panorama. The mountain is characterised with steep grassy southern slopes, with less steep, but overgrown northern slopes and by a few wild rocky regions around its western fore-summit, showing also a huge landslide wound. Three marked paths reach the summits, ensuring it is frequently visited. 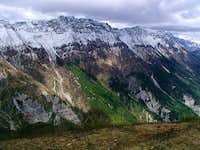 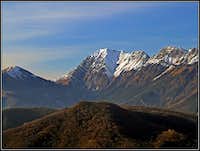 The western fore-summit of Monte Chiampon is called Deneal. It has a sharp western ridge, seen best for example from Bordano, and a big landslide wound, emerged in the last earthquake. After Monte Chiampon itself, the main crest runs over several a bit lower peaks. Their names are: Corta, 1679 m, M. Faeit, 1636 m, Ambruseit, 1523 m, Siroche Dolegne, 1640 m, Siroche Gjaline, 1581 m, Cuel di Lanis, 1629 m, M. Laschiplas, 1612 m to Postoucicco, 1611 m, after which the crest lowers significantly. Most of these names are Slovenian in origin. Towards the north the slopes of Monte Chiampon crest are falling down into Valle della Venzonassa, through which Torrente (creek) Venzonassa flows.

South of Monte Chiampon an interesting fore-summit stands. This is Monte Cuarnan / Mali Karman, 1372 m. On it a church stands. The place is very panoramic, and as it is easilly reachable, no wonder why also very frequented. Between M. Cuarnan and M. Chiampon, there is a saddle, named Sella Foredôr, 1089 m. From this saddle towards the east and south-east Vedronza creek flows through a valley of the same name.

South of the main Monte Chiampon crest, over the Foredôr saddle, one of the most important tectonic faults of Julian Prealps runs. In its western part, above the town of Gemona, in the lower part of Vegliato creek valley, there's one of the biggest debris cones of the area. It is estimated that up to 3 billions of m3 of materials are forming it, being the result of glaciation and first of all tectonic unstability of the area. 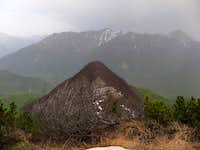 Being the last high summit of the group, Monte Chiampon offers a very broad panorama. The most beautiful parts of it are the views on Julian Alps, on the highest part of Carnic Alps and along the Tagliamento river down towards the Po river plane and the Adriatic coast. 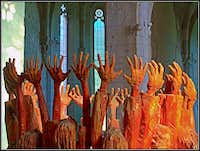 The whole area was heavilly devastated by a severe earthquake in 1976. An absolute must is the visit of the beautiful Venzone/Vencon/Pusja vas. The town still lies behind medieval walls and even if it was completely demolished, it is well renewed today. The exhibition in the church and town hall tells the whole story. The beautiful church was, for example piece by piece, stone by stone ordered on a nearby plane, stones were carefully marked, after which the church was reassembled again. And so many other buildings. Similar was the fate of Gemona, where the Duomo is also any time worth of visit, and of other nearby towns. 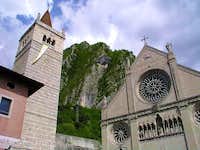 Gemona del Friuli can be reached by A23 highway Udine - Tarvisio. There one exits and drives towards the centre of Gemona. In the NW part of the town a good marked mountain road starts (near the sports parc). Driving towards the SE (the narrow, but newly asphalted road has many switchbacks) you reach Malga Cuarnan, 1075m, where there is 'agriturismo' and the end parking place. This is the southern approach for Monte Chiampon and the northern approach for Monte Cuarnan.

The northern approach to Monte Chiampon starts in 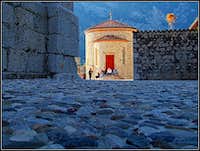 Venzone/Vencon/Pušja vas, where a road enters Valle della Venzonassa. You drive by the valley till the point 514m, where on one side the path up towards San Antonio Abate church goes, and on the other side down towards Venzonassa creek. Some 100m later (before the tunnel) the road is closed. Then take the marked path towards the south.

The eastern approach starts on the mountain road, which ascends towards the west from the sources of Torre river. The road is closed for public traffic on the altitude of some 800m.

On Monte Cuarnan many paths also go from the south, where mountain roads cross the fore-hills. Gemona is the starting point.

1. From Malga Cuarnan, 1075m. From the hut we continue eastwards and in few minutes reach Sella Foredôr, 1089m (can be also reached by a marked path from the east, through the valley of vedronza). There we turn north (still the path No. 713) and start a steep ascent over grassy slopes. After half an hour we reach the rocky part, where the path gets more demanding. Soon we reach a small notch in the side ridge, where the passage is a bit exposed and protected by a steel cable. This is Passo della Signorina, 1359m. The steep ascent continues, especially in bad conditions this part of the route requires some attention. The steep grassy slopes are falling deep enough to be dangerous. After some 100 meters of steeper ascent the path gets 'normal' again and in many switchbacks we reach over the upper part of the side ridge the summit. From Sella Foredôr 1 hour 30 min, from the parking place 10 minutes more (650m of altitude). The ascent is possible mostly the whole year, but better not try it in fresh snow or ice, in spring you may need ice pick and crampons. Otherwise no problems, but a safe step and some caution is needed.

3. Over the whole east crest. By the main crest Alta via CAI Gemona goes. From the source of Torre river the mountain road can bring you up on some 800 m. Then you continue hiking along Vodizza/Vodica creek (path No. 729), reach Casere Tasaoro and from there towards the SW on the main crest. You reach it on Cuel di Lanis, 1629 m. Then continue by the whole long crest towards the west. The approach might take you some 6 hours and is qite demanding (not secured).

4. M. Cuarnan is easilly reachable from Sella Foredôr. From the parking place it's some 45 minutes.

Above Gemona there are rocky slabs, where climbers can be seen from the main town square. This falesie are one of the favourite rock gyms for the climbers of the province of Udine. The area is divided in two sections: Alto and Basso. The first is for climbers of medium/high capacity, while the second is only for the best ones. On this slabs you can find many routes from 4c to 8b+. Here you can find maps and detailed descriptions of the routes.

There's no need to sleep on the mountain, except for longer hikes along the whole crest. So, there's no official mountain hut. On Malga Cuarnan, 1075m, there is 'agriturismo', meaning a farmers restaurant. 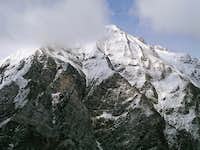 Monte Chiampon can best be ascended in dry seasons, so in summer and autumn. The southern slopes are too steep for skiing and the northern slopes seem too overgrown for skiing.