From the N, from Resiutta 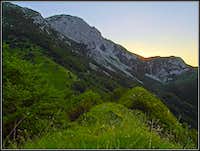 From the south, from above Malga Confin

From the E (above Val Resia) 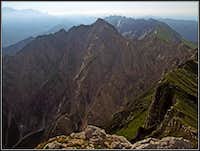 For many years I had been not aware of this mountain at all. In the Slovenian mountaineering literature it's mentioned almost nowhere. And, yes, for us, the mountain is standing behind the 'seven hills and seven valleys'... But not the same for our Italian mountaineering friends, especially since on Malga Confin the 'Agroturismo' is operating and so from there by a marked path the summit can be ascended in less than two hours. Back to my story... Then I was observing from the nearby mountains the ridge between the wild Monte Musi / Muzci on the east and the panoramic Monte Plauris / Lopič on the west. And didn't know what the sharp, rocky summit could be. Until I finally found some description, made a plan, and, after some two years, realised it. Well, at least most of it.

Monte Lavara / Golz / Javor (the Slovenian name Javor means maple) is on the main ridge of Monte Musi / Muzci - Monte Plauris / Lopič a bit indented towards the north. It is a nice rocky pyramid, on which the hike-up is not just the easiest, but also not at all hard. As from the other neighbouring mountains, the panorama from it is wonderful. It offers near views on the wild rocky scenery and also views far in the distance - on the highest summits of Carnic and Julian Alps and on the plane of river Po. See the pictures in the chapter of 'Summit Panorama'.

From Monte Lavara / Golz / Javor towards Monte Plauris / Lopič the main crest goes in a SW direction. A nameless notch (Tabacco map) is dividing it from the neighbouring Jôf di Confin, 1761 m, after which the crest continues in the W and later in the NW direction. I have no information how hard this part of the main crest would be if one would want to combine in one tour both summits - Monte Lavara / Golz / Javor and Monte Plauris / Lopič. Towards the other side (Monte Musi / Muzci) the main crest first goes in a SE direction, lowering down on Forca Campidello, 1461 m. Unlike other neighbouring summits, Monte Lavara / Golz / Javor sends a rocky face also towards the south. Below these rocks debris slopes make the ascent even more tedious (but not the descent). All other sides of the mountain are very wild and rugged. Steep ravines and sharp rocky ridges descend towards the NW into Resàrtico valley, and also towards the NE into the Rio Nero / Črni potok valley.

Only the white uppermost rocks of Monte Lavara are Dachstein Limestones. They are lying on thick layers of Main Dolomite and the whole rocks structure is markedly bent - from the west we can clearly see the famous Monte Lavara Sincline. Clear geologic faults can also be seen. One of them, reaching the saddle between Monte Lavara and Monte Jouf Ungarina is responsible to bringing the layers of Main Dolomite up to the same height as the Limestones of Dachstein. 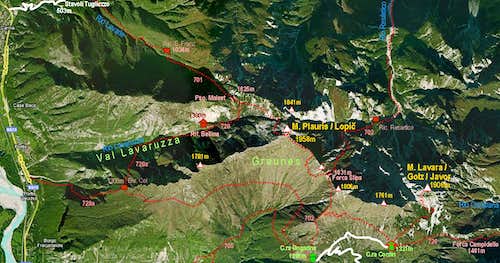 Through the main valley of Tagliamento/Tilment the A23 highway Udine - Tarvisio runs.

1. For the S approach exit the highway near Gemona and drive to Venzone / Venčon town. Don't forget to have a walk through it! On the northern part you enter the Val Venzonassa. By a narrow mountain road you drive into the valley till the altitude of some 475 m, where before the first tunnel there's a parking place. If you want to ascend by the church of San Antonio Abate, you can park on the curve before (some 40 meters higher). At the tunnel the sign stands that the road further into Val Venzonassa is closed for public traffic. But when the agriturismo on Casera Confin is opened, below the sign you will find an inscription (in Italian only), allowing you to drive up on that alpine meadow. The road continues above the Venzonassa valley, above Borgo Prabunello you find a crossroads (towards the east you'd continue on Forca Tacia, 1053 m), where you deter left. In many turns the road brings you on the slopes of Jôf di Ungarina, where you take the right branch on Casera Confin, 1331 m (the left branch brings you on Casera Ungarina).

2. For the E approach you drive through the valley of Fella / Bela till the small village of Resiutta. There the road deters into Val Resia / Rezija. Drive a few kilometers into the valley, till the crossroads near S. Giorgio. There deter right, cross the Resia creek and find the path No. 703. Perhaps you can cross the creek even a few hundred meters earlier, but not with a car. Map: Tabacco 1:25.000, No. 027: Canin - Val Resia - Parco Naturale Prealpi Giulie.

1. From the south. From Casera Confin, 1331 m, take the marked path towards the NE (not No. 726!). Even on Tabacco map it's not drawn as a marked path, but it clearly is and also the inscription on the board by Casera Confin is clear. The path first crosses slightly ascending meadows and woods, then a bit steeper the slopes, overgrown with pine bush, till we reach the crossroads below the S face (ca. 1505 m). There we turn left, ascend over enduring screes and into a short ravine (ca. 1740 m), climb through it (a short, almost useless steel cable) on a side rib and continue by it right towards the top. Through pine bushes it's first quite steep, then above, in the vicinity of the W ridge the ascent gets less steep and over rocky blocks you soon reach the top. 1 h 45 min. All in all it's a medium hard walk-up, steep in a few places, where quite some care is needed, but as it is well marked there are no bigger problems. Gear: Good hiking shoes and poles. The Italian grade is: EE (Escursionista Esperto = Experienced Hiker).

2. From the east. Take care: This description is only tentative, as I have no personal experience! You enter from Val Resia / Rezija the valley of Rio Nero / Črni potok and continue towards the south, following the path No. 703. The creek has also some nice cascades, worth of visiting. After 1 h 30 min we reach Ricovero Casera Rionero, 865 m and continue southwards till the crossroads on 908 m. There take the right branch, which ascends westwards - first on Casera Lavara, 1269 m, then on Forca Campidello, 1461 m. From there (or even from Casera Lavara) find passages on the SE ridge of Monte Lavara / Golz / Javor and, if marked, continue on top. If the SE ridge is not marked, then continue from the saddle till below the S face and climb on top as described under #1.

Monte Lavara / Golz / Javor can best be ascended in dry seasons. In Julian Alps that would mean from June till end of October. 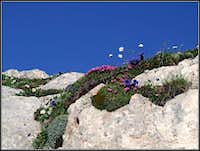 The mountain is within Julian Prealps Nature Parc, which was established in 1996. Its headquarters are in Prati do Resia. For more details see the its official web page at: http://www.parcoprealpigiulie.org/ 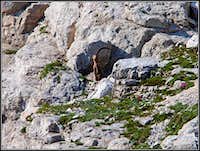 From the south, The unicorn steinbock

Before going on top of Monte Lavara / Golz / Javor, the master of Casera Confin warned us to be alerted to see on the mountain a big steinbock (ibex), whose horns are more than 1.2 meters long. Climbing on the mountain we already forgot his words, but after completing the ravine scramble, Jasmina stopped and showed me a strange creature in the middle of a rocky face. Yes, there was the king of this mountain! Guarding his soft grassy meadows. But ... he had only one horn, the left one. I swear, also the picture is not photoshopped! The old animal slowly moved away. It must have been very hard to maintain balance in these vertical rocks, with only one heavy horn. Who knows how hard was the battle in which he lost the other one? He survived, for a high prize, but entered the legend. The legend of Monte Lavara Unicorn.