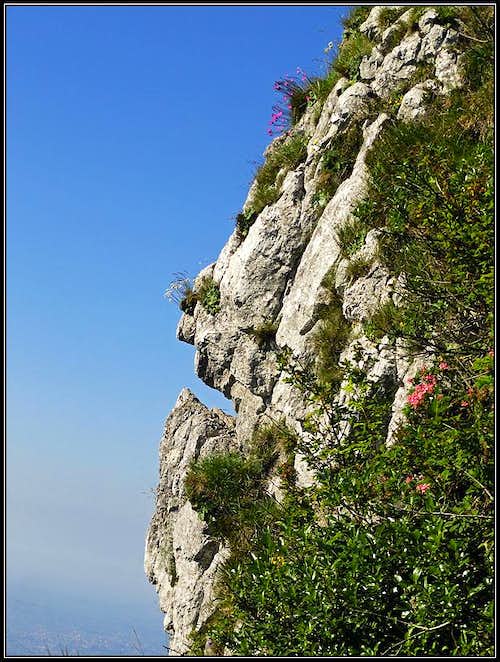 A face in stone

The main ridge from the W 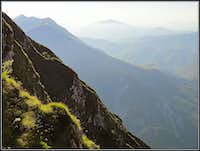 The very southern part of Julian Alps is characterised by long mountain streaks in which summits are of a quite equal altitude and the saddles are only a little bit lower. Those mountains are ideal for long tours along the ridges - if only difficulties are not too high for you. And the distances are big. The range of Stol - Gran Monte stretches for some 34 kilometers. The South Bohinj Range even more than 40 kilometers. And entirely on the Italian territory there are two more wild streaks: the famous Muzci / Musi and the range of Monte Chiampon.

Some people say that the ranges of Stol - Gran Monte and the one of Monte Chiampon are one and the same, only the river Torre / Ter cuts them. Geologically perhaps. Otherwise the cut of Torre / Ter is so deep that the western part - of Monte Chiampon - is completely separated from the eastern part. And here our focus lies. While on the very west of this ridge a quite popular Monte Chiampon rises, on the eastern part, above Torre / Ter, the first high and significant mountain is Monte Postoucicco / Postovčič. From the latter towards the west are the following summits: Monte Laschiplas / Laški plaz, 1612 m, Cuel di Lanis / Lanež, 1640 m, Monte Faeit / Bukovnik, 1636 m.

As you see the names are almost exclusively Slovenian. They say that Postovčič derives not of "postovka" (=kestrel), but of "ovčice" (=sheep). Anyway, on the southern side people of Slovenian origin inhabit the valley of Vedronza / Bedroša - up to the saddle Foredor / Predol.

This is a lonely world. Shepherds removed from these mountains long ago, today only hunters go there and a few lonesome hikers. On the northern side there were once broad meadows (like Tazaoro / Tam za goro or Plan di Tapou / Za Topolom). Today they are abandoned, in summer high grass will cause you trouble even on hikes. The southern side of the mountain chain is very steep, high and rocky. From Monte Postoucicco / Postovčič, for example, the slopes are falling down to Pradielis / Na Teru village almost 1300 meters.

The view towards the east

The view towards the west

The southern and the northern part of panorama are very different. Towards the south the views are free. Much lower the fore-hills are stretching and then the Alps end on the plane of Furlania. The northern side of panorama is packed with summits. Yet, the long and compact, some 200 m higher ridge of Musi / Muzci is closing a big portion of it, only a few highest summits are peeking from behind. Very beautiful is also the view towards the east where we are looking along those long ridges. They are like kulisses on the horizon. And fine is also the view towards the west. The range towards Monte Chiampon looks wild and remote and on both sides along the neighbouring valleys we can see the mountaneous world in the distance. 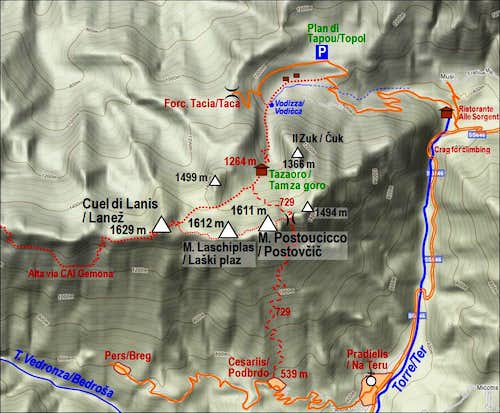 There are basically only two suitable trailheads for ascents on Monte Postoucicco / Postovčič.

The shortest and a bit more comfortable is on the northern side. From the sources of Torre / Ter river (restaurant) we can drive on towards the west by a narrow, a bit deteriorated, asphalt road. On the altitude of some 810 m a cart-road deters left, towards Casera Tacia / Tace (ex alpine meadow). There we can park (option No. 1). If we drive on some 500 meters, we can see inscriptions for the marked path No. 729, deterring left. There's the second option to park and start the tour. The last option is another 500 meters up the road, where on Plan di Tapou / Topol it is closed for public traffic. There is a big parking place. But continuing by the road (on foot) towards Tacia saddle, 1080 m, woud lead us much around, so better start on one of the two options below.

The range from the south

The second possibility to start the route on Monte Postoucicco / Postovčič is on the southern side, in the village of Cesariis / Podbrdo, 539 m. We get there by car from the main road in the valley of Torre / Ter, if we deter west in the village of Pradielis / Na Teru. 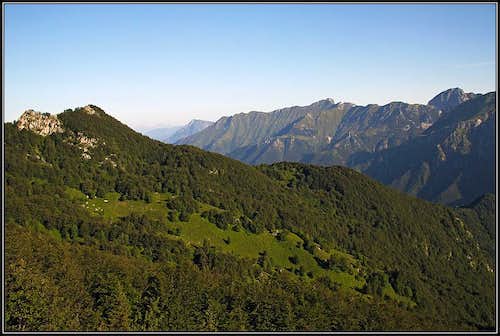 On the northern slopes

1. From the north, 800 m. From one of the parking places on the mountain road below Plan di Tapou / Topol we go towards the W to the source of Vodizza / Vodičca, then southwards on Tazaoro / Tam za goro alpine meadow and then by the path No. 729 towards the SE on Dolina notch. From the notch by the E ridge on top. 2 h 30, marked (on the summit ridge poorly), steep grassy slopes, lonesome area.

The slopes above Pradielis / Na Teru

2. From Cesariis / Podbrdo, 539 m. The marked path No. 729 goes from the village in the northern direction, first by a cart-road, ther in endless turns. In 3 hours we reach Dolina notch on the main ridge, where we deter left and climb by the E ridge on top. 3 h 30 min, marked (on the summit ridge poorly), steep grassy slopes, lonesome area.

There are no official huts in this area. On Tazaoro / Tam za goro alpine meadow there are two huts still standing, but they are closed. In emergency we might perhaps be able to overnight there. 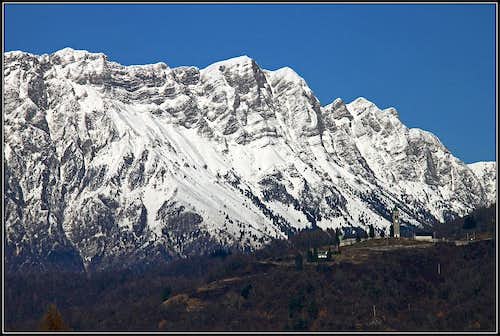 Do the tour on Monte Postoucicco / Postovčič in dry seasons, from June to November. In winter the area must be completely abandoned and the rugged terrain is not much suitable for skiing. Still, for a winter ascent in good conditions skis might be helpful, but the whole tour will be long, starting by the source of Torre / Ter, 540 m.