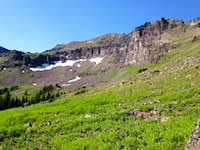 By musicman82
Along with Mount Chisholm, Mount Bole is the highest peak in the Hyalite Canyon area and the northern Gallatins.

Although there is no summit register there to verify what I am about to say, Mount Bole probably sees very few ascents. The peak is in a remote section of this part of the Gallatins, and the route one would be most likely to take is about 7 miles, with the last 2 being a ridge traverse (along Hyalite Ridge) that features exposure and Class 4 terrain. In addition, the ridge traverse crosses two ranked peaks and a few unranked ones along the way, making round-trip elevation gain more than 5000'.

But it's a journey that is every bit worth it. Once you leave the trail, you are virtually assured of solitude, and the scenery is spectacular-- great wildflower meadows, a rushing stream, snow-capped peaks both near and far, and the dark volcanic rock that comprises so much of the northern Gallatins. That rock, though loose in places, is generally far more stable and trustworthy than the volcanic rock found in Greater Yellowstone cousin the Absaroka Range, and aside from the fact that it can be sharp and thus not easy on the hands, it makes for great scrambling along Hyalite Ridge.

Climbing Bole can be part of the finest mountaineering adventure in the Gallatins and one of the finest in all of Greater Yellowstone-- a traverse of the ridges around the head of Hyalite Canyon. In Select Peaks of Greater Yellowstone, author Thomas Turiano writes that in the early 1940's, Bozeman climber David Wessel set the standard for this by scrambling the entire ridge system in three days. In the process: he attained the following named summits (and surely many unnamed ones as well): Sleeping Giant, Flanders, Overlook, Chisholm, Fridley, Hyalite, Divide, Bole, Elephant, and Blackmore. Anyone undertaking this needs to be prepared for Class 4 conditions (and possibly Class 5) and dangerous weather, as most of the route is above treeline and there are not a lot of good escape options. 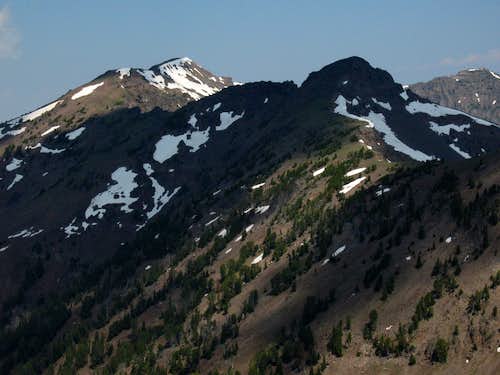 Starting from the Blackmore Trailhead might seem to make the most sense, and it does work, but there is a better spot. From Main Street in Bozeman, turn onto S. 19th St. and drive 6.7 miles to the turnoff for Hyalite Canyon (the sign is easy to miss going this direction). Then drive 9.3 miles to the huge Hyalite Day Use Area and park. An unmarked trail by a pit toilet is the one to use (see picture below). 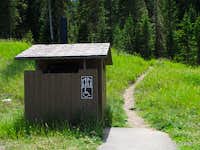 People using the Blackmore Trailhead without knowing about the other start end up hiking past this spot anyway, so save yourself a little hiking time, distance, and elevation gain.

Anyone planning on including Bole as part of a long day or a multi-day traverse of Hyalite Ridge may also want to consider the trailheads for Hyalite Peak and for Emerald and Heather Lakes (access for Mount Chisholm and Overlook Mountain.

This route follows Hyalite Ridge from the Blackmore-Elephant saddle. Including Bole, it offers five distinct summits and two or three more depending upon how you count them. Some of the summits have to be climbed, but not all of them do.

I got a GPS track of 4.8 miles to the Blackmore-Elephant Saddle. Much of it is a dull hike through dense forest, and Blackmore Lake, which seems to be drying up, is one of the ugliest mountain lakes you will ever see. But after the trail drops to the lake and starts to climb again, the last 1-1.5 mi becomes very scenic as the trail climbs through open meadows to the saddle. Look up for Window Rock, where there is a small keyhole-style arch high on the mountain.

From the 9650' saddle, about half of the remaining route is visible. Bole is not. That high peak you might at first think is Bole is really Point 10,211, which does have enough prominence to make it a ranked peak. 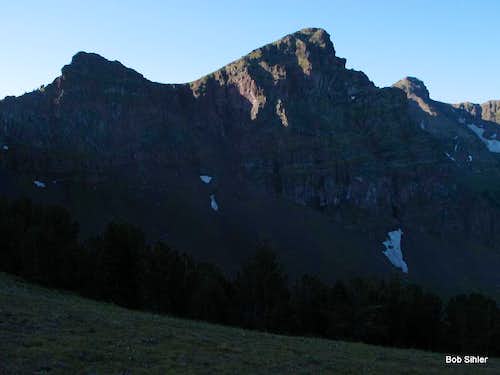 Now head left and make your way up to the saddle between the northern and southern summits of Elephant Mountain and then head south over the south peak. I'm not sure which of the two summits is higher; although the map puts the elevation (10,085') with the northern one, my GPS and eyes suggested the south summit is slightly higher. 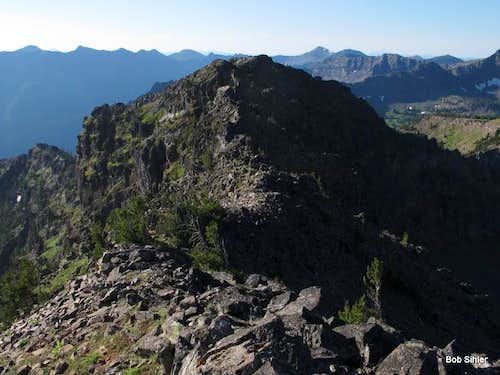 From the south summit, you can see the rest of the route, including Bole. 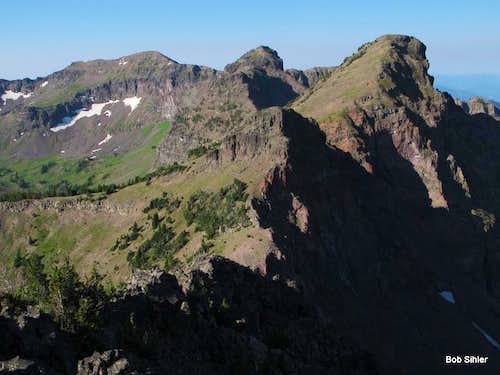 Now follow the ridge south to a 9800' saddle. Unless you drop from the ridge to the ledges below on the east side, you will end up having to downclimb Class 4/5 terrain before it is over. 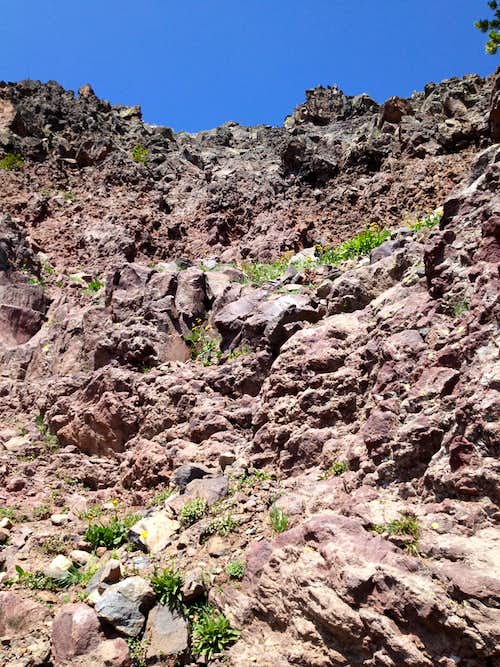 By musicman82
The next obstacle is an unnamed, unranked peak about 10,000' in elevation. Its northern face appears to be the most difficult climbing on the ridge, but the peak can be bypassed on loose, uneven Class 3 and 4 terrain on the east side.

Up next is Point 10,211. This one, too, can be bypassed on the east. Between Point 10,211 and the next peak south, which is the last one before Bole, there is a 9800' saddle. Climb south from that saddle over the unnamed peak (about 10,250', with two subpeaks). The descent from this peak is, in my opinion, the trickiest part of the route because it goes through a section of dramatic ash pinnacles looking like something from Mordor. These pinnacles are surprisingly stable but are exposed. Although I climbed across them on the way to Bole, I dropped down a little on the return and found a safer way up through them. 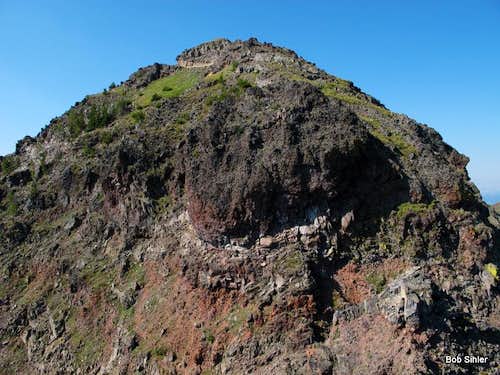 Reaching a saddle north of Bole, hike Class 2 terrain the rest of the way to the summit. 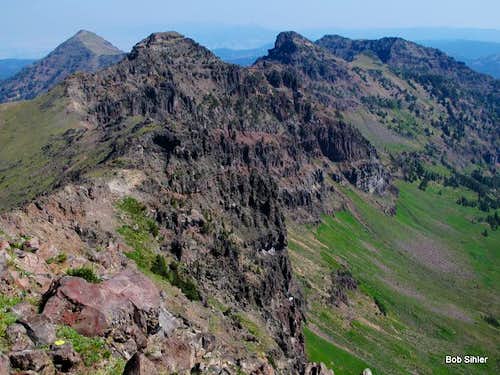 Looking back on the route from Bole
The closer you stay to the crest of the ridge, the more enjoyable and challenging the scrambling is. You will definitely encounter some exposure and some Class 4, but whenever you find yourself on Class 5, go back and look for something easier; it's there. 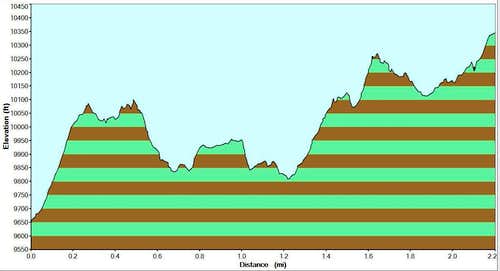 From either the saddle south of Elephant or south of Point 10,211, one can drop into the basin below and follow the drainage first to Palace Lake and then Arden Lake, from which one can ascend what appear to be Class 2 slopes southeast to the ridge above and then northwest to the summit. This would make the route about 8 miles.

From above, the meadows in the basin look like pleasant walking, but a friend tried this way and reported that the footing was bad, brush was higher than it looked, and much of it was marshy.

The obvious advantage of this route is that it avoids the exposed scrambling found on the ridge. The obvious disadvantage is the significant elevation lost and regained-- about 800' each way-- though in the end it might not be too much more than the ridge route considering its ups and downs. That is assuming one does every peak on the ridge; if one bypasses one or two of the peaks, then there will be a major difference in elevation gain between the two routes.

Conceivably, one could also approach this basin from the trail up Hyalite Creek and leave the trail to try finding a break in the cliffs near Twin Falls. That would entail significant bushwhacking and route-finding challenges, and I can't imagine why one might want to bother with it for any reason other than wanting to find out if it goes. Or for pictures-- the two lakes are very pretty and would frame shots of the surrounding mountains nicely. The one-way distance for this route would be around 4 miles.
Info from Peakhugger: Based on photos of the area and other reports I've read, there are no easy breaks in the cliffs near Twin Falls, but ice climbers have skied the Palace/Arden bowl by this route ()http://www.wacweb.org/Trips/TripReports/default.view?_mode=details&RowId=430. It is possible to ascend the Maid of the Mist Creek, at least on skis in winter. Bushwacking in summer may be excessive up this drainage. From there, one could potentially traverse over the west flank of Palace Butte to reach the Palace/Arden bowl and then ascend the East slopes of Bole, which appeared to be Class 2 by my assessment as well.

It is possible to hike up into Hyalite Basin, then take the trail to Squaw Creek Divide, and, after making the brief ascent from there to Divide Peak, to follow Hyalite Ridge to Bole. While I have not done this route (the Divide-Bole traverse), I have seen it from both ends and can say that one certainly should expect at least Class 3 conditions en route. This route is not so good as a day trip because the one-way distance is about 8.5 miles, but it works nicely if one has a vehicle shuttle and uses different trailheads or if one is willing to add a road walk of about 4 miles to a day that already will be nearly 16.
Info from Peakhugger: I climbed Bole in 2010 from Divide Peak and can confirm that the traverse is just Class 2. There was one exposed area of Class 3 just west of Point 10201, but this could be avoided by downclimbing slightly to the south.


As mentioned in the Getting There section, there is a trailhead west of the peak and accessible from U.S. 191 with a 4wd vehicle. Assuming this access is still open, one could make a much shorter approach to the peak this way; the overall distance might be cut by as much as half. Eyesight and maps suggest the mountain can be ascended without too much difficulty via its west slopes, but I have no information whatsoever on trail or off-trail conditions out there.
Info from MTcutts: I just noticed your page for Mount Bole and wanted to let you know that an ascent from the west is indeed a straightforward matter. The trail up Squaw Creek (now called Storm Castle Creek I guess) is very good. When I went up Bole a couple years ago, I followed the trail to about 9000' and then headed off trail to the saddle just north of Divide Peak. After climbing Divide, I followed the ridge back over to Bole. Fun scramble. From Bole, I backtracked a bit and descended back to trail, reaching it about 8600'. Steep in spots, but never too bad. Saw dozens of goats. Good to hear the route works well from Elephant. A traverse from Elephant to Alex Lowe Peak is on my list, but I wasn't able to get up there this fall do to the fire...As for the road access to the Storm Castle trailhead (trailhead at ~7000'), it is pretty good. It is rough in a few areas, where a high clearance vehicle would be desirable but not necessary. I have reached the trailhead several times in a 2WD passenger car in dry conditions. I have not been up there for a couple years, but would not think conditions have changed. Unlike the road up Hyalite, this one is not plowed in the winter.

There are several developed campgrounds in Hyalite Canyon, and the closest to the trailhead is Hood Creek (less than a mile away); sites for it and some of the other area campgrounds can be reserved at recreation.gov. There are also two rustic cabins nearby, Window Rock and Maxey, that can be rented through recreation.gov. Dispersed camping is widely available. No permit is required for backcountry camping.