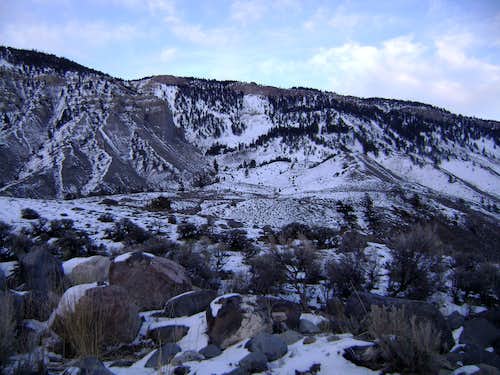 The West Face of Mount Everts, seen from above the Gardiner River.
If you have ever visited the North Entrance of Yellowstone National Park, you have probably seen Mount Everts. Located in the Gallatin range, Everts is a massive plateau, stretching from the Blacktail region of Yellowstone, all the way to the town of Gardiner(which is located just outside the North Entrance). Although Everts is only 7,831 ft tall, it has huge vertical relief when viewed from the west. From Mammoth(the park headquarters) Mount Everts dominates the eastern horizon, with its steep limestone cliffs and slopes towering nearly 2000 vertical feet above the Gardner river. A sizable population of bighorn sheep lives high on these cliffs.
The mountain is a geological wonder, due to the many layers of ancient rock that make up the west face of the peak, as well as the cliff band beneath the summit. These layers of rocks provide a unique look into the geologic history of Yellowstone. Students from nearby universities(primarily MSU in Bozeman) as well as geologists, come to study the cliffs of Mount Everts.

Mount Everts gets its name from the famed wayward explorer Truman C. Everts. Everts was a member of the Washburn expedition into Yellowstone in the year 1870. He was separated from his party near the Yellowstone Lake region of the park, and spent over a month thrashing his way through the wilderness, enduring nearly every manner of hardship. When he was finally found, Everts was emaciated, and nearly dead.
His account of the ordeal became a sensation, and brought a lot of attention to the Yellowstone region. 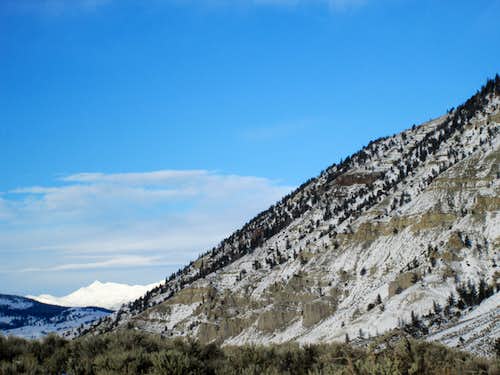 The northern half of Mount Everts. The Rescue Creek trail starts near the base of the mountain(in the lower left corner of the picture) and heads up the gently sloping backside. 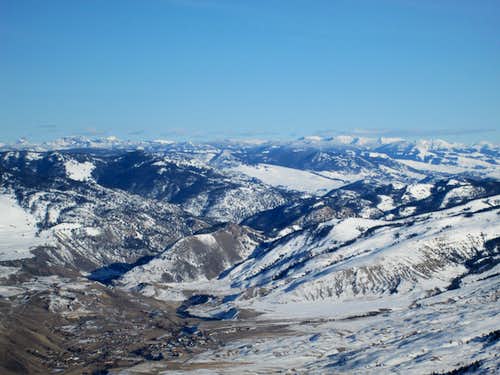 View of Everts(the slope on the lower right) and the town of Gardiner, Montana, from Electric Peak. The North Entrance of Yellowsone National Park is located just outside of Gardiner.
Mount Everts can be reached and ascended from several locations. The most popular(and easiest) way up the mountain is via the Rescue Creek trail, which can be accessed from a parking lot just to the south of the North Entrance of Yellowstone National Park. This trail goes up the gentle backside of the mountain, and provides spectacular views of the Yellowstone River, and the surrounding region. Another easy way up the peak is via the Blacktail plateau, which is located midway between Mammoth and Tower Junction.
The West Face: 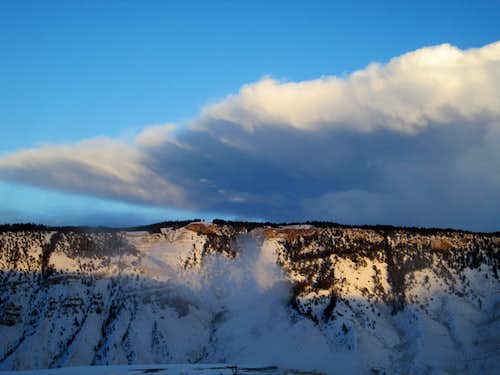 The West Face of Mount Everts. 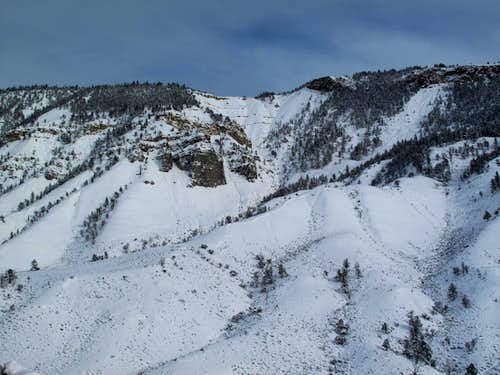 The massive West Face of Mount Everts.The snow near the top is extremely steep. 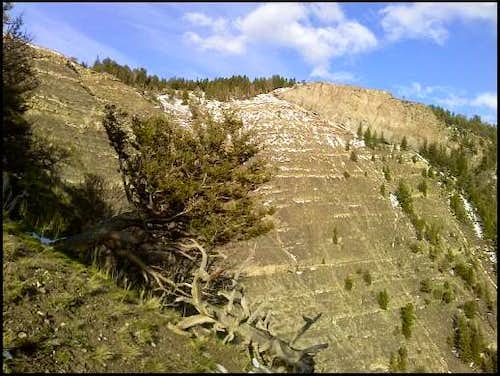 Heading up the steep west face of Mount Everts. There are innumeralbe routes on the west face, some much steeper than others. 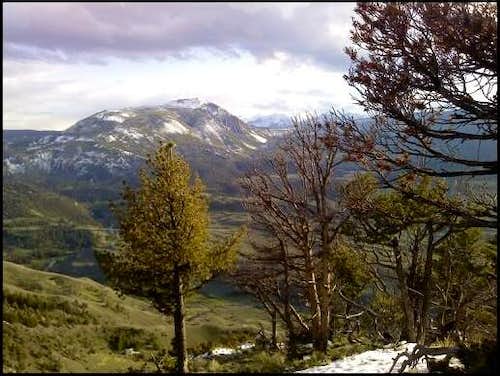 Looking towards Bunsen Peak from high on the west face of Mount Everts. 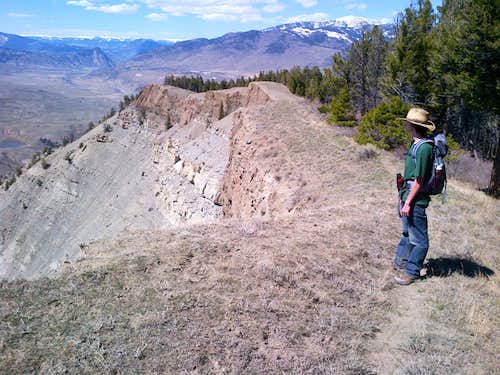 The top of Mount Everts, above the cliff band. 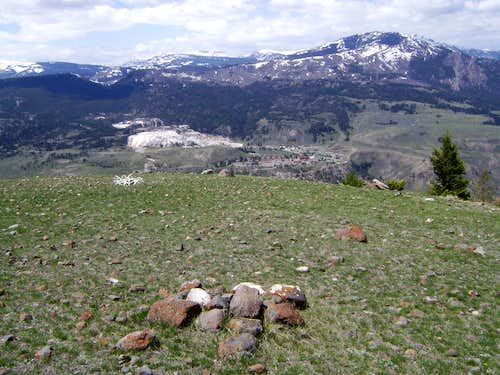 The summit plateau of Mount Everts, looking towards Mammoth. Sepulcher Mountain can be seen on the right.
Alternatively, one can also ascend the steep slopes(or cliffs depending which way you go) of the West Face in order to reach the summit. The easiest way to do this is by crossing the bridge underneath the boneyard, in the employee housing area of Lower Mammoth. Stay to the right of the large draw on your left, and continue up the steep meadows until you reach a large group of trees. These trees lead through a gap in the cliff band beneath the summit .
The Northwest Face: 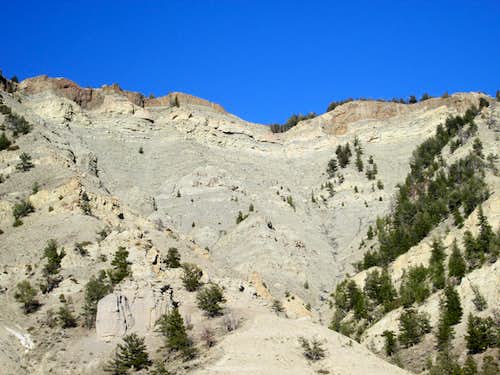 The northwest face of Mount Everts seen from its base 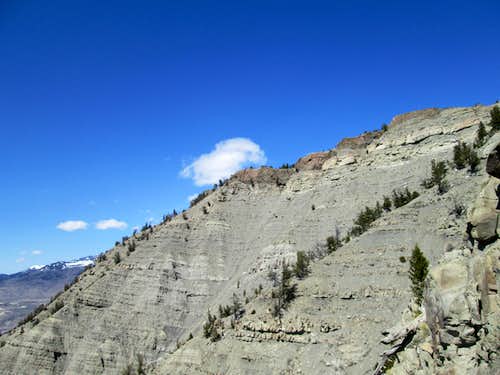 The northwest face of Mount Everts from halfway up 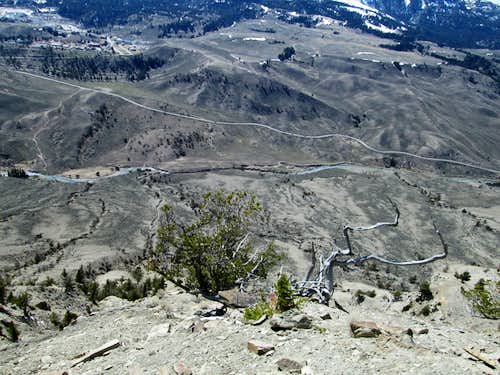 Looking down from halfway up the northwest face of Mount Everts, Yellowstone NP 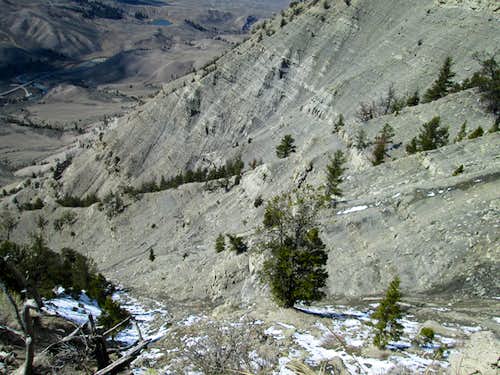 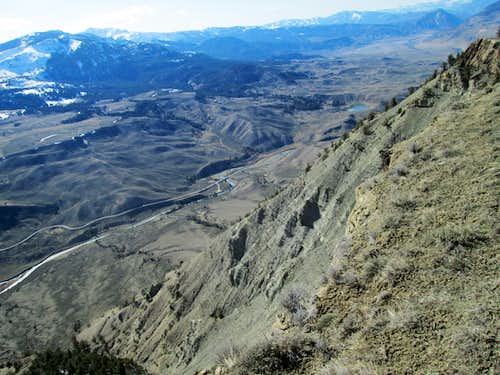 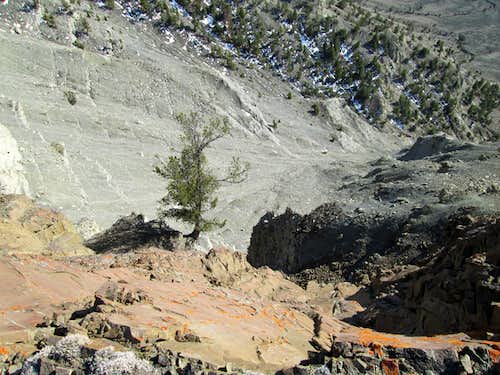 Looking down the red cliff at the top of the northwest face of Mount Everts
The Northwest Face of Everts can be ascended from other locations, although these are much more steep and exposed. The steepest part of the mountain is the basin on the northwest face. Several steep ridges ascend this face, and are very fun scrambles. These ridges require occasional low 5th class moves to negotiate rock bands. The rock on Mount Everts is very crumbly, and as such, trad climbing would be very sketchy and difficult.  It is very easy to get cliffed out on some sections of the West Face, so make sure you don't climb up anything that you can't climb down.

Video from the top of the Northwest Face of Mount Everts.

The Albright visitor center at Mammoth is chock full of interpretive rangers, who are very knowledgeable about the history, geology, and wildlife of the park. They have a lot of good information, and can offer helpful advice. One can also purchase maps and trail guides from the visitor center as well. Make SURE you carry bear spray when hiking anywhere in the park, and try not to hike alone. In addition, making lots of noise and avoiding thick underbrush will also help reduce your chances of surprising a bear. People have been killed and maimed by bears and other wildlife in the park, so make sure you don't meet the same fate. Bear spray can be purchased at either the Hamilton store in Mammoth, or at the Flying Pig in Gardiner. 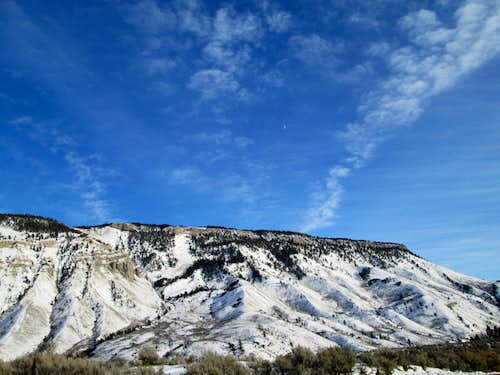 The West Face of Mount Evers seen from the boneyard. 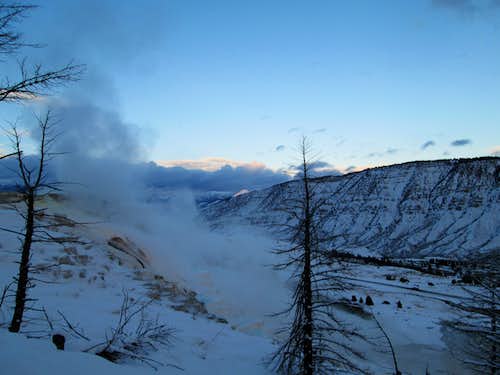 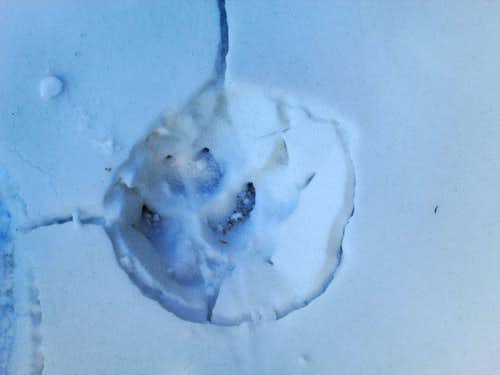 Wolf track in snow at the top of Mount Everts 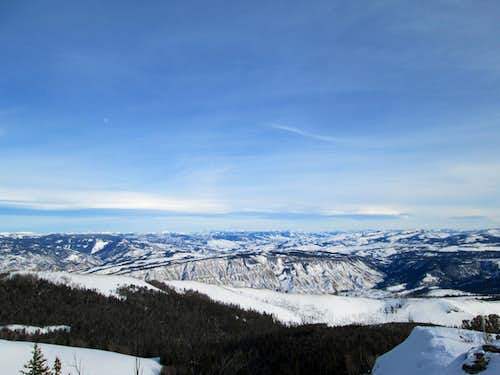 Mount Everts viewed from the top of Sepulcher Mountain.