It is not however, the highest mountain on Australian Territory. This title belongs to Mawson Peak with a height of 2745 metres , being the highest summit of "Big Ben" on Heard Island in the Australian sub Antarctic territory of Heard & McDonald Islands.

Mt Kosciuszko is part of the Great Dividing Range which straddles the state boundaries of Victoria and New South Wales in the immediate vicinity of the mountain, and then forms a chain stretching north all the way into tropical far-north Queensland. Mount Kosciuszko is located half-way (280 miles/450 km from each) between Sydney and Melbourne in Southeastern Australia.

Debate continues about whether the mountain is one of the "seven summits." Dick Bass (USA) included it in his "Seven Summits" quest in which he completed the highest 7 summits on each continent after topping out on Mt. Everest on April 30, 1985. Many purists contend that the highest point on the Australasian continent is actually Carstenz Pyramid in Irian Jaya. (Tectonically speaking on the same continental plate as Australia). Since then many have completed Dick Bass' version of the "Seven Summits" including a 20 year old girl. 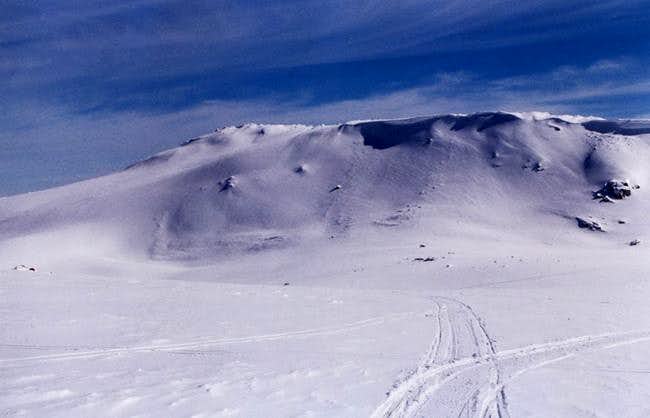 Although not much of a mountaineering peak because of its relatively low altitude and gentle slopes, Kosciuszko is located in one the more beautiful national parks in the world.  360 degree views from the summit take in the Victorian High Country, the Main Range & the Monaro tablelands).
The first recorded European ascent was by Polish explorer Paul (Pawel) Edmund Strzelecki in 1840. Strzelecki named the peak after its similarity to the tomb of the Polish patriot Kosciuszko. The name of the mountain was originally spelt this way but over the years the "z" was dropped. More recently, this original spelling has been reinstated. The aboriginal name for the peak is Tar Gan Gil. It is not (to my knowledge) documented that Aboriginal people summitted the mountain, however it seems likely that they did, given the ease of access and given that they had their own name for the peak and many nearby features such as Lake Cootapatamba ("Where eagles drink") Other nearby peaks include Townsend, Carruthers, and Twynam, which along with Kosciuszko form the backbone of the main range and forms the backdrop of Australia's only glacial lakes. Source

"The Kosciuszko National Park is Australia’s highest national park, covering 1.5 million acres of magnificent alpine terrain. The Park is host to a wonderful variety of flora and fauna, including many alpine plants, which are found nowhere else in the world. More than 200 species of birds have been sighted in the Park - almost 40 percent of the known bird species in NSW. The awesome wedge-tailed eagle is a common sight as are kestrels, emus, cockatoos and magpies". 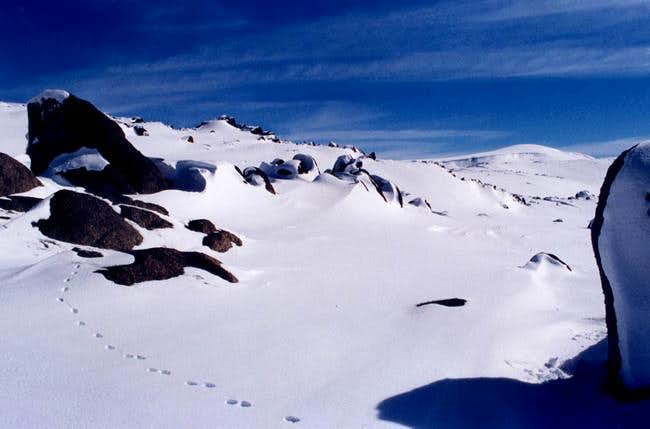 The Parks outstanding natural features received international recognition in 1977 when it was made a UNESCO Biosphere Reserve."Source

Thredbo is pretty close to being half way between Sydney and Melbourne. Driving time from both cities is between 5 and 7 hours depending on traffic.

Directions from Canberra thanks to richardpattison:

Hire a car, turn right out of the airport, straight across the first roundabout, then left on to Highway 23 (Monaro Highway) heading South, the main town signed will be Cooma. Continue straight through Cooma town centre and join the picturesque Alpine Way (Kosciuszko Road), follow this to and through Jindabyne. Just past Jindabyne, turn left to continue along the Alpine Way to Thredbo, a popular ski resort which allows access to Mt Kosciusko via tha "quad chair" and a hiking/X-country ski trail (depending on the season) along the pole line via the Etheridge range. Thredbo is a good base for all summer and winter activities in the area.

An alternative to access via Thredbo is to continue along Kosciusko Road (ie don't take a left at the Alpine Way) via Sawpit Creek, Smiggin Holes and Perisher Valley. In winter the road is closed at Perisher Valley. In summer you can continue to drive to Charlottes Pass and then hike straight onwards about 10km to the summit via Rawsons Pass or from Charlottes Pass via the Snowy River crossing (downhill and to your right from the carpark) and along the main range summits. In winter a pole line follows the road from Perisher valley to Charlottes Pass and on to Rawsons Pass just below the summit. This pole line is an excellent ski tour.

As of June, 2014 there is a $16 entrance fee to the National Park.  (Higher fees apply in the ski season)  An $85 annual pass will get you into any National Park within New South Wales. You can pay this at the National Parks and Wildlife Service office in Khancoban and Jindabyne or at the Entrance Station just 13km’s from Thredbo on the Jindabyne side.

Get a Kosciuszko National Park Map here in PDF format.

A fire in 2003 damaged some of the huts. Here in PDF Format is a map showing the location of the damaged huts.

On the western side of the Main Range, fire destroyed some of the shrubs which helped to hold snow in place. Be aware of the risk of possible snow slides on the steeper slopes. Many trees have also been weakened by fire. Do not camp underneath overhanging trees, due to a higher risk of falling branches. Do not rely on finding or staying in huts. A number of huts were either damaged or destroyed by recent fires, including:

Hiking/climbing can be done year round, although you can expect snow (sometimes heavy) from June through October.

Winter ice climbing is often available above Club Lake, and at Watsons Crags (both accessible from the main range route descibed above) However the availability of ice climbing is not consistent from year to year and the climbs are basically single pitch, short routes. 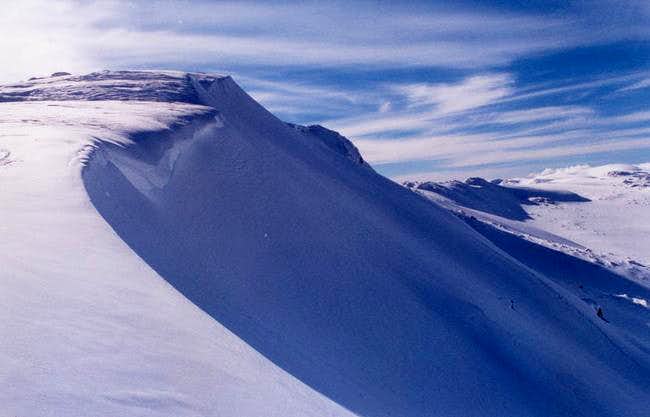 Camping is permitted virtually anywhere in the Park except:
1. In the catchment areas of the glacial lakes
2. In the resort areas
3. At Yarrangobilly Caves

Basic facilities such as pit toilets and fireplaces are provided in the picnic /camping areas. Elsewhere camps should be out of sight of the roads and well away from water courses. Mountain biking is permitted on all fire and maintenance trails within the Park.

You are prohibited to camp within 200m of any of the alpine (above the tree line) lakes. And large groups are requested to stay below 1500ms.

National parks also request you to use poo tubes above the tree line !

A campground with good facilities is located at Sawpit Creek just behind the Ranger Station. This campground is usually just below the snowline.

I invite you also to the English version of this mtkosciuszko.org.au website. You will find there a lot of information about the conquest of Mt Kosciuszko the highest peak of Australia, and about sir Paul Edmund de Strzelecki the explorer who gave the mountain its name.

Dadndave - hope you are staying cool and safe with all the recent fires. The URL on this page for the weather report has changed. Here's the new link. https://www.thredbo.com.au/weather/weather-report/