My sister Melissa and I left our car at the road closure on the Westside road at 7:15am. We had got our permits and climbing passes the day before and then camped near the park in order to get an early start. I would recommend doing something similar to this since having to drive to Paradise and back would make it very hard to start at a reasonable time (made that mistake last year). It took an hour and a half to reach reach round pass where we left the road. We made a brief stop and the South Puyallup Campsite to take advantage of the last privy before being in bluebag territory. From there we started the long ascent on the Wonderland trail. Around 11:00am we hit the snow line at 5,200 feet. Switching into our boots we lost the Wonderland Trail and followed tracks that lead straight up the slope to the ridge at 5,900 feet. From here we decided to continue up the ridge instead of going to Saint Andrews Lake and gaining the ridge from there as we did last year. This ended up being a good decision, but might not be later in the season when there is less snowpack. We skirted by Andrew (6,716’) by traversing a steepish (45°) snowfield on its south side. Visibility had been declining for a while now and was down to around 100 feet. Not long after passing Andrew we came up on large dropoff in the fog where we didn’t think there should be a dropoff. It was only 3:00pm but we set camp (6,700’ish) in the lee of a clump of trees hoping that it would be clear in the morning and we could see where to go.

Just as the weatherman promised it was clear and calm in the morning. The route up the Puyallup Cleaver was very clear with Tokaloo Spire not to far above us. We started out early, the snow was very good for walking. We climbed the ridge to around 7,700’ (a little ways past Tokaloo spire). At this point we roped up and put crampons on before dropping off the ridge on the Puyallup Glacier (North) side. We stayed fairly tight to the ridge, not wanting to lose too much elevation. We continued up until reaching the ridge just shy of 10,000’ below Saint Andrews rock. From here the route drops down to the several hundred feet to the Tahoma Glacier. Again it was still pretty early in the day to stop, but there was a bit too much midday rock fall coming down the chute for me to want to venture out into it so we set up camp. This is where we had originally been planning to camp, but had been toying with the idea of getting up the glacier a bit to make summit day a little shorter. In hindsight, I would say this is the best place to camp. (But be sure to dig your tent in well, this spot can be VERY windy. We weathered a nasty thunder and lightning storm here last year.) As we set up camp we were surprised by a solo climber. After a short break he continued on up Saint Andrews rock, not going down the chute to the glacier. We raised our eyebrows as he made his way up some fairly exposed and high angle snow without crampons and with his ice axe still on his pack. But clearly he knew what he was doing and before long was out of sight. 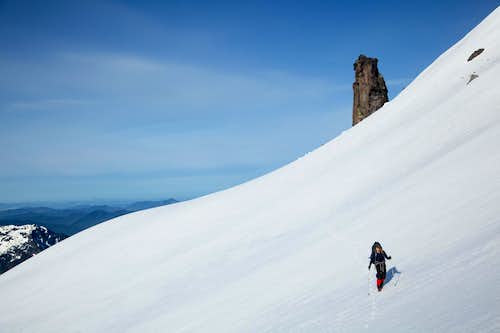 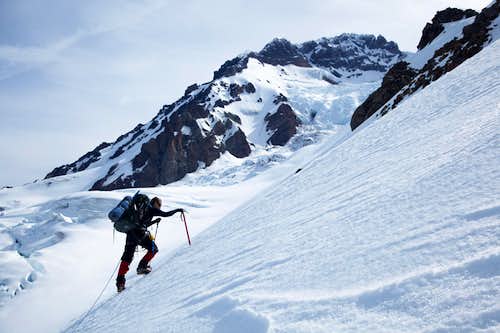 On the Puyallup Glacier

The plan was to spend the morning of day three scouting the route up the glacier then spend the afternoon resting before the summit attempt the next morning. But since we had arrived so early the day before and rested quite a bit, and since the weather was good, I was very tempted to try for the summit on day three. But trying to navigate the glacier in the dark without having done any scouting was something that I really didn’t want to do. I got up at 1:00am just to have a look. The weather was perfect, but it was very dark (duh) as there was no moon. I decided to stick to the plan and wait till the next day. I went back to sleep hoping that I wasn’t wasting the only day of good weather we would have. Around 5:00am we got up and went on a scouting mission while the snow was still hard. We dropped to the glacier at the far side of the chute and worked our way toward the middle of the glacier. We climbed for a couple hours, marking the way with wands to follow the next morning in the dark. Than made our way back to camp before it warmed up and rocks started to fall in the chute. As we made our way back we saw the solo climber from the day before climbing back down along the top of Saint Andrews rock. We stopped and took a break to let him get far enough ahead of us that we wouldn’t be in the fall zone of any debris he could knock loose. It turns out that he went all the way over the Saint Andrews but couldn’t get back on to the glacier. He set up a camp near ours, saying that he would probably try the way we went in the morning. We offered for him rope up with us but he politely declined. We spent the afternoon resting, until we around 3:00pm when we heard voices and saw three skiers coming down the mountain. Once they made their way to our camp we traded beta, they told us that they had come down the Sickle and then followed our tracks down. This was great for us, as now we had tracks to follow on the upper part of the mountain.

The alarm went off at 12:15am, about an hour after I was finally able to fall asleep. The weather was great and we packed as quickly as possible. We were on the move by 1:00am. I was very glad that we hadn’t tried to summit the night before, having wands to follow made it much easier going. For the most part we were in the center of the glacier between 9,700’ and 11,000’ it is heavily crevassed but there are plenty of bridges. When we got to the end of our trail we started following the skiers tracks which took us to first the far left (north) side then all the way back to the right (south) before cutting back to the left side and entering the Sickle chute. The snow was nice and firm and made for good cramponing. The steepest grade we encountered in the Sickle was about 45°. There is plenty of potential for icefall here though and we moved as quickly as we could. There is a bottleneck 3/4s of the way up that was no problem to get through but could potentially become one later in the season. Once we got to the top of the Sickle and were out of icefall danger we took our first break, but only for a couple minutes not wanting to waste the cooler weather and firm snow. It was starting to get light at this point. The rest of the way was pretty straight forward, at the advice of the skiers we headed toward the saddle between Liberty Cap and Columbia Crest before turning right and climbing to the summit. We reached the summit at 6:15am. We traded summit photos and congratulations with a group that had come up the D.C. Then after only a few minutes on top we started back down, trying to take advantage of the firm snow. The descent went smooth and quick, putting us back at the tent by 9:30am. The rest of the day we rested and relaxed in the tent. 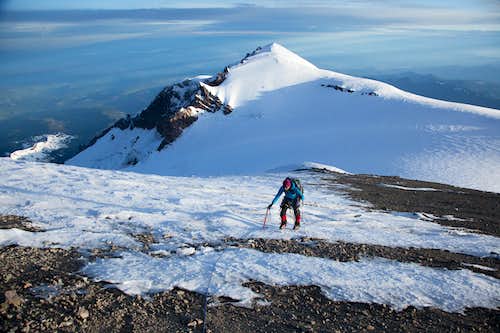 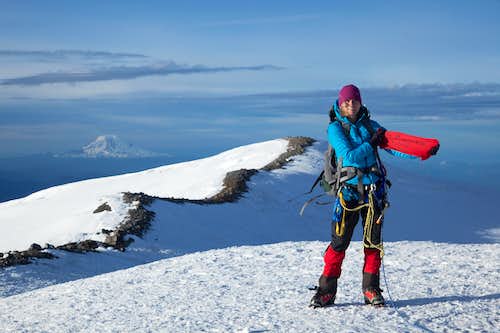 The wind picked up in the night and it snowed a little bit, but by morning it was mostly clear. Although clouds could be seen below. We packed up and started down. The snow was ok but not great on the Puyallup Glacier, postholing every few steps. When we got back on the ridge it was a little better going, but the visibility started to drop. Not long after passing Tokaloo Spire we were in thick fog. Doing our best to feel our way along the ridge we continued down. We ended up getting a bit lost on the lower ridge trying to get back to the Wonderland trail and ended up having to stop and bust out the map and compass. We got back on track before too long and continued on, dropping off the ridge and down to the snow line. Switching into our shoes we hiked back to the car, arriving at 3:45pm.

It should be noted that the glacier direct also looks to be in great shape if you wanted to avoid the Sickle. You can view our complete gear list here, and our food list here. Feel free to email me with any questions, jdstylos@gmail.com 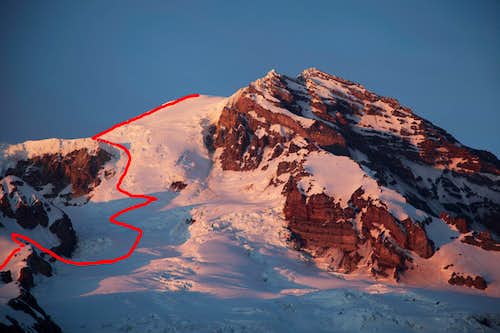 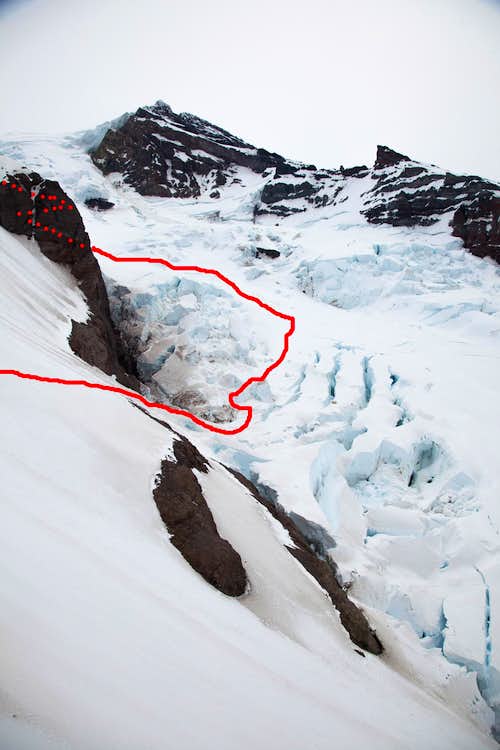 Seems like this route doesn't see nearly as many ascents. Cool to see a TR on it!