Old Men and the Kautz 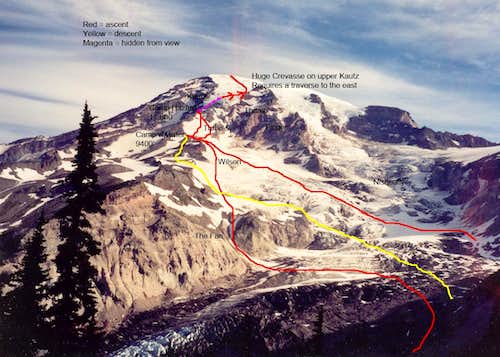 This photo shows the different approaches or descent route we used. Kautz Glacier - Mt Rainier
Frank, Mike and I attempted to do this route as a two day trip in 2003 but 500 miles of driving, a late start and 9000 vertical feet of climbing proved to be too much for the three of us. Even though we had perfect weather and snow conditions, the trip was a non-stop 3 day grind and frankly, not much fun.
We came back in 2004 with a new plan where we would stay one night on the cleaver (9000') below the Turtle snow field and the next night below Camp Hazard (11,300') giving us a rest day before we went for the summit. We also had the time to find the slot and the short rappel into the gully that leads to the ice cliff and onto the Kautz. We took off from our camp at 12:30 AM and climbed solo by headlamp until daybreak came as we were just below the crest. At 6:45 AM we were on the summit. We hung around for at least an hour as the sun warmed things up and then down climbed the route. We spent one more night below Camp Hazard and descended in the early morning when things were relatively quiet.
As we descended the Wilson Glacier we heard a lot of water running under the snow and in the distance, a waterfall. Frank suggested that we avoid the fan and descend across the Wilson to the Nisqually. We were familiar with the route across the Nisqually from our previous trip on a low snow year and didn't think much about the decision. After jumping a crevasse and plunge stepping down a relatively clean stretch of the Wilson, we came to a maze of crevasses that were running in several directions and it looked like we were going to have to re-climb the 500' we had just come down. Mike and I were resigned to the fact that we had just screwed up when Frank announced that he had spotted a solid snow bridge that appeared to lead through the maze. He called for a belay so we dropped our packs and got ready to set some anchors. As Mike and I came down closer I could see that the bridge was solid but it had what appeared to be a 150' overhanging left side and a 50' drop on the right. I shouted to Frank, "that sucker looks like it's 150' deep." Ever the geology professor, Frank said "umm..., they are rarely over 140' deep due to the compressive forces at the bottom of a glacier". Under my breath I said, "WTF, it looks like you fall, you die". The crevasse crossing was both terrifying and stunningly beautiful at the same time. The ice was aquamarine to deep blue, unlike any colors I had seen on this earth but the bottom was as black as a coal mine. The bridge itself couldn't have been wider than 3 feet and it was maybe 30' to get across the narrowest section but what a walk it was. We went across quickly, one at a time only to find that it led to more ice cliffs. Once again, Frank spotted a line and with the temperature warming up it was time to get off this glacier. We zig-zagged down the ice fall on more bridges and finally got out to the relatively flat section of the Nisqually where we took a break. Just as we dropped our packs we heard a crack and rumble only to look up and see a large serac crash exactly where we had walked 30 minutes earlier. It was a great relief when we finally walked off the Nisqually and back to the trail.
We were very fortunate to have the luxury of timing our trip to be able to climb in perfect weather and snow conditions. We started up the mountain just as a front moved out and high pressure was building. We had clear skies and freezing temperatures for all three nights making for great snow conditions and little activity from the cliff. For me and Mike, it took 4 trips to get a weather window like this. We had been blasted off this mountain many times in the past so this trip was magic.

What time of the year was this climb?

Both of our trips (2003, 2004) were in mid-July. I swore off going to Rainier in the early season after being snowed off 4 different times in the month of June. Around July, we usually get a big high pressure ridge that builds up over the western U.S. that produces days and even weeks of clear weather. Having been beat down and whipped before, we didn't leave for Washington until we saw a good weather trend developing.