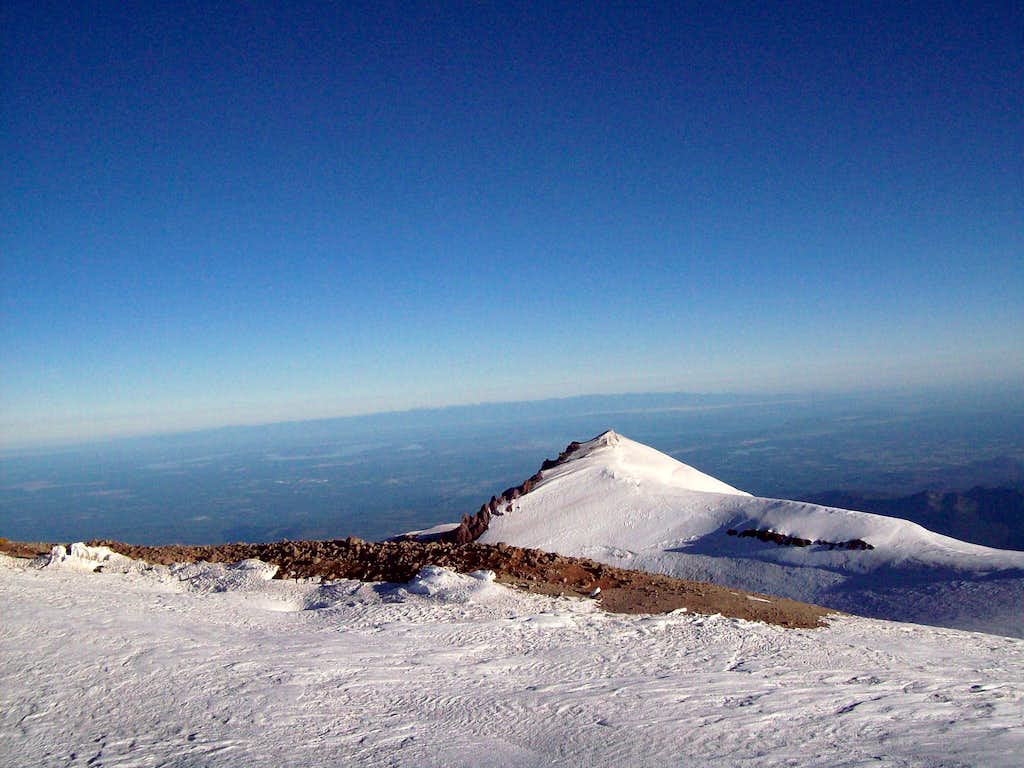 Before I write this trip report I must gives thanks to all who made this success possible. It wouldn't be right to write a trip report without a special thank you to them. This mountain really was The Perfect Trip

1. I must give thanks to my leader Russell and rope and organization leaders Anna, Ben, Pete, Alicia, and "New Zealand" Pete. Russell knows this mountain well and did a great job organizing this special trip while the rope leaders were perfect in leading us through the tougher sections of the mountain.

2. The climbing partners who all stuck in there together and helped each other out with gear and encouragement. A special thanks goes out Marek who got the tent for us on the trip.

3. The "sherpas" which is a group of volunteers that actually help bring up gear from the bottom to Camp Muir, and will greet you on the way back with food and cookies. It almost makes me cry to think about how they help us.

4. Mount Rainier. That mountain REALLY wanted us on the summit. I never thought in my wildest dreams that I would be standing on the summit with 30 degree weather with 10 winds and perfect views (we could see everything above the fire)

5. My wife for letting me go up this peak knowing how dangerous it could be. One day when your health recovers I hope to lead you to your share of summits.

6. OSAT who and it's volunteers who set up the course and helped us throughout all of the climbs. I plan on giving back my time to this very special club.

Thanks to all for making this the best climbing memory I have ever had. 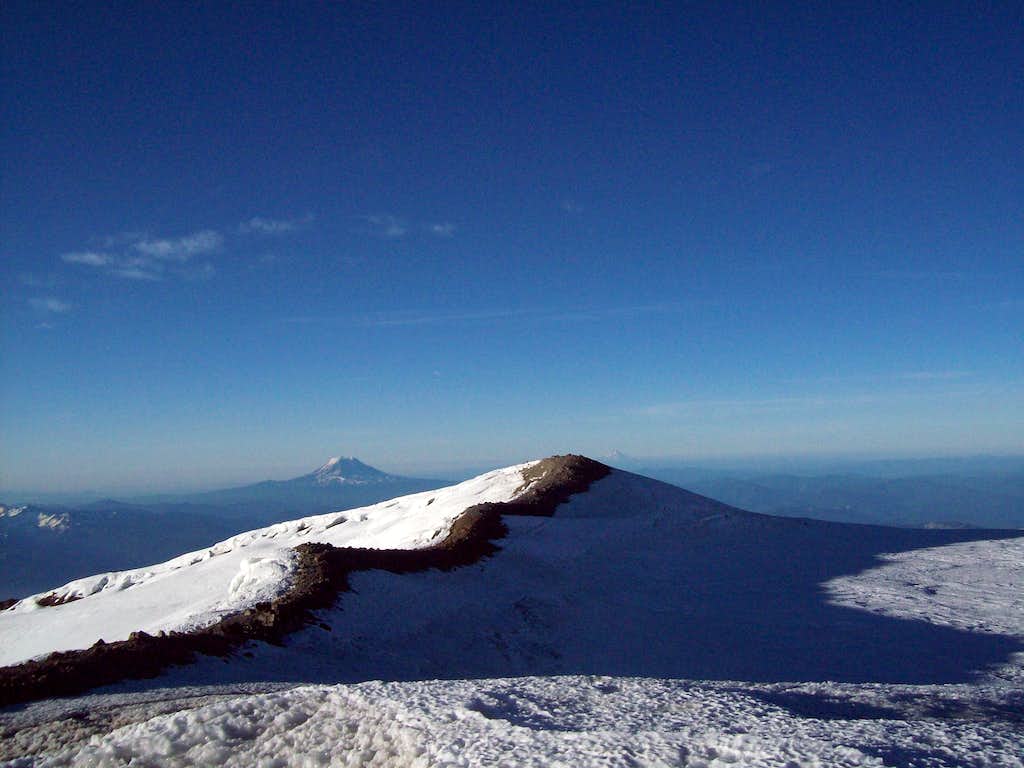 The shot from the summit

This well organized trip started on Saturday July 18th. All of the groups and "sherpas" started out in Paradise with decent weather. With all of our gear we set a slow but steady pace up to Muir and made it there in a little under 5 hours. The "sherpas" were a MASSIVE help in getting us to Camp Muir. I hope to do this next year a couple of times for next year's groups. It was uneventful and actually much easier than I was expecting.

At Camp Muir we decided to rope up and head to Ingraham Flats. Crossing the first glacier was simple but cutting through the scree on Cathedral Gap was a little challenging. It was the first encounter we had with that volcanic scree and it woke us up a little. Anna did a great job leading or rope team through this tough section. Fairly soon we were at Ingraham Flats and setting up or tents.

That night though it was windy. Winds at the camp were about 30 miles per hour. But all of us did a good job in setting up our tents and making ourselves comfortable. Since we were not going for the summit the next day every one took it easy and many of us slept well that night.

The next day was the acclimatization day. To me this is the most critical part of the trip. I had worked 75 hours between two jobs this past week and was very tired. At the Flats, between the first night and the acclimatization day I received at least 20 hours of sleep. Russell, our leader, as well as many others in our group were gathering information from the climb teams who went that preceding day and were tactically setting us up for summit day. It was windy the morning of acclimatization but the winds were dying down and Big Tahoma was letting us know it wanted us to visit her. 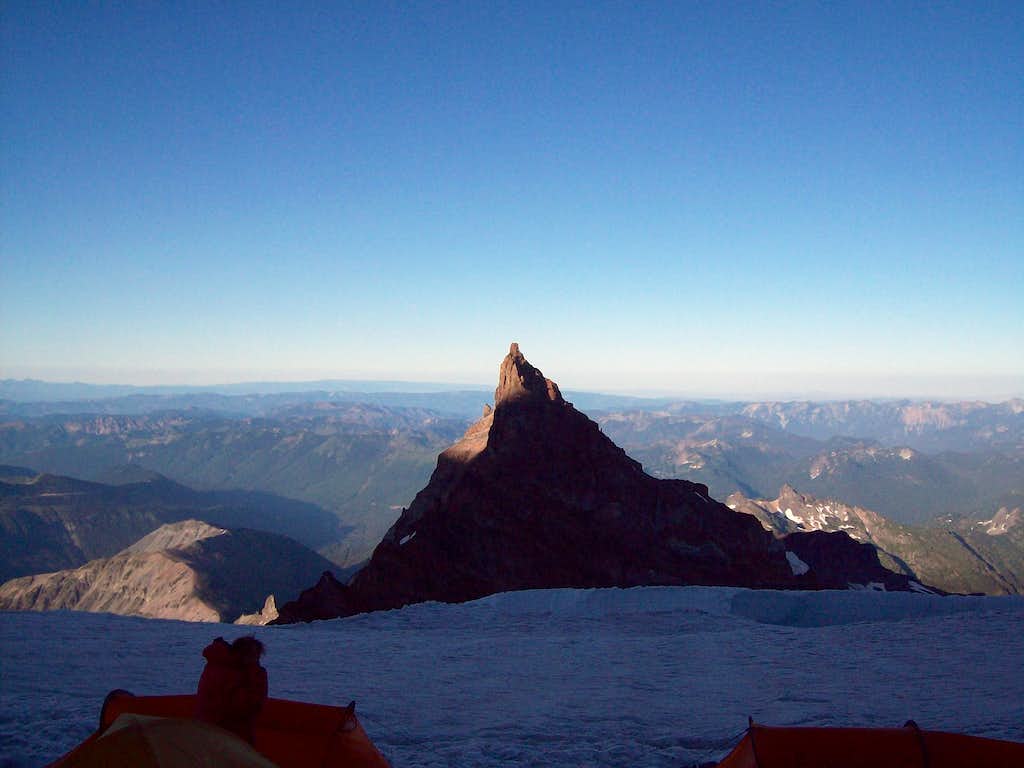 Looking over at Little Tahoma 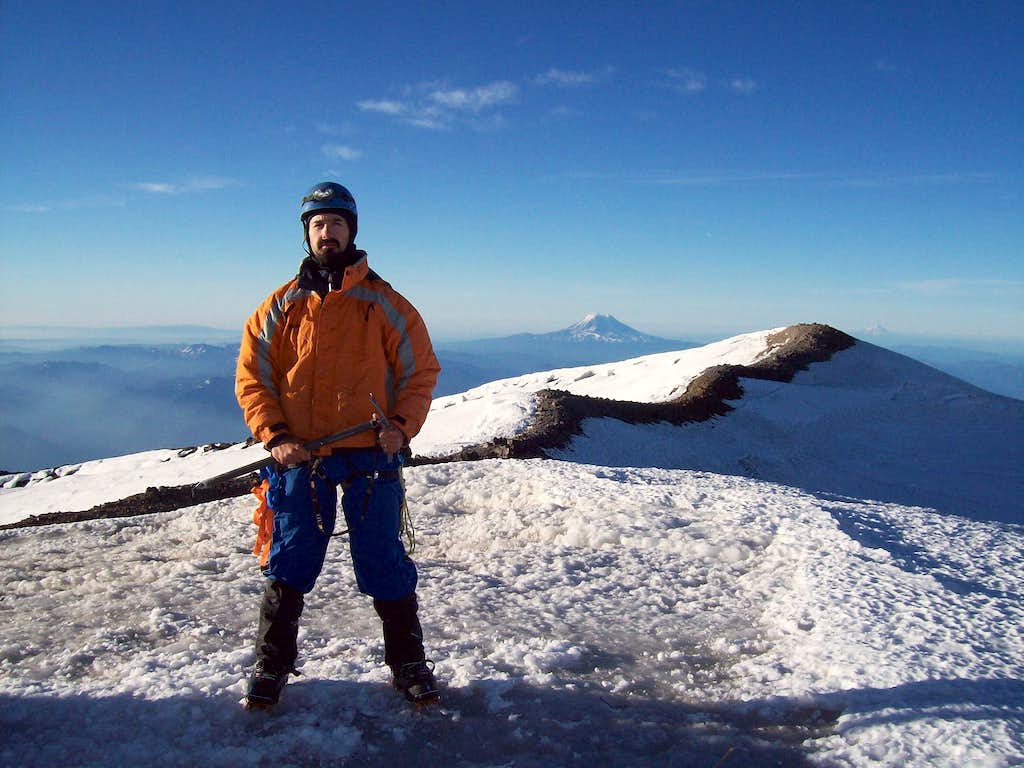 From the summit of Rainier

We woke up at 10 pm and started for the summit around 12am. Russell set a great slow pace for us. We crossed the Ingraham Glacier and then hit the Disappointment Clever. In my opinion the Clever is clearly the crux of the trip. It is home to a number of rockfalls, has exposure (though we could not see it at night), and a nasty mix of scree, rock and thin snow. We cautiously went up this section and took our time through this section. Communication was good between the rope teams and went through this section pretty well.

We continued on up at a slow but steady rate up mountain where we were welcome with a well laid out route and good weather conditions. The weather though was perfect. Big Tahoma was really wanting us there badly. We crossed six or seven crevasses in all, one which was 4 feet wide but had a thin stepping board across it. It was beautiful to look into the crevasses but a little scary so I unfortunately did not get a good picture of them.

We had a good steady pace. None us were struggling with our breathing yet we made good progress up the mountain. I thank Russell for setting the pace because he, as with Mount Baker, gets us to the summit in good shape. I pray I get the chance for many more climbs with him. His leadership, organization, as well as pace setting, is a role model that I hope to incorporate in many of my trips. Considering we were a group of 11, that was very good. We were past by only one climb team and two soloist.

One of the soloist actually pasted us again going down. He made it to the summit from Camp Muir in 2 hours 20 minutes. I know he wasn't bluffing either because that guy was going at an Iron style pace and wasn't evening breathing heavy. It was like he was going up Si. My guess was either he was a ranger or this guy was taking full advantage of his year round climbers permit. After all the Rainier climbers permit is like an all you can climb season pass for one year. 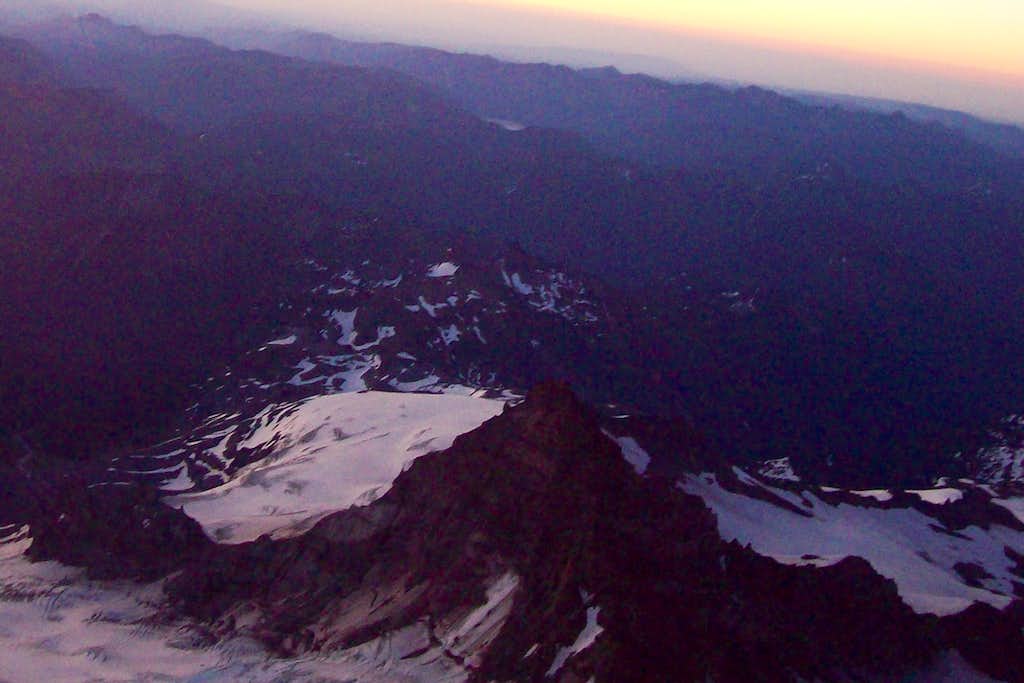 Looking down at Little Tahoma

We saw the sunrise come up. My pictures did not come out well here but trust me, this was beyond amazing. The colors of the sunrise were something I will never forget. You see Jefferson, Hood, Adams, Glacier Peak, Baker going up.

We made it to crater shortly after 6:30 and the true summit log shortly there after. For the first time ever we ran into the Emmons OSAT team which was actually hitting the summit at the exactly the same time. The meeting was clearly a first and was something that even the climb leaders were practically in tears about. Columbia Crest had amazing views, which was actually a surprise. I heard horrible stories about how this peak was so high up that they were disappointing. Add on St. Helens here and you were home to seven volcano views as well as some great shots that some of the lower mountains.

All of us had a short get together, and said the OSAT anthem. We then signed the summit log and then packed up to head down. We had to move quickly because one of our members was getting altitude sickness (luckily not HACE and HAPE). She was a trooper but the high elevation was beginning to take it toll once we were on the summit for a bit. 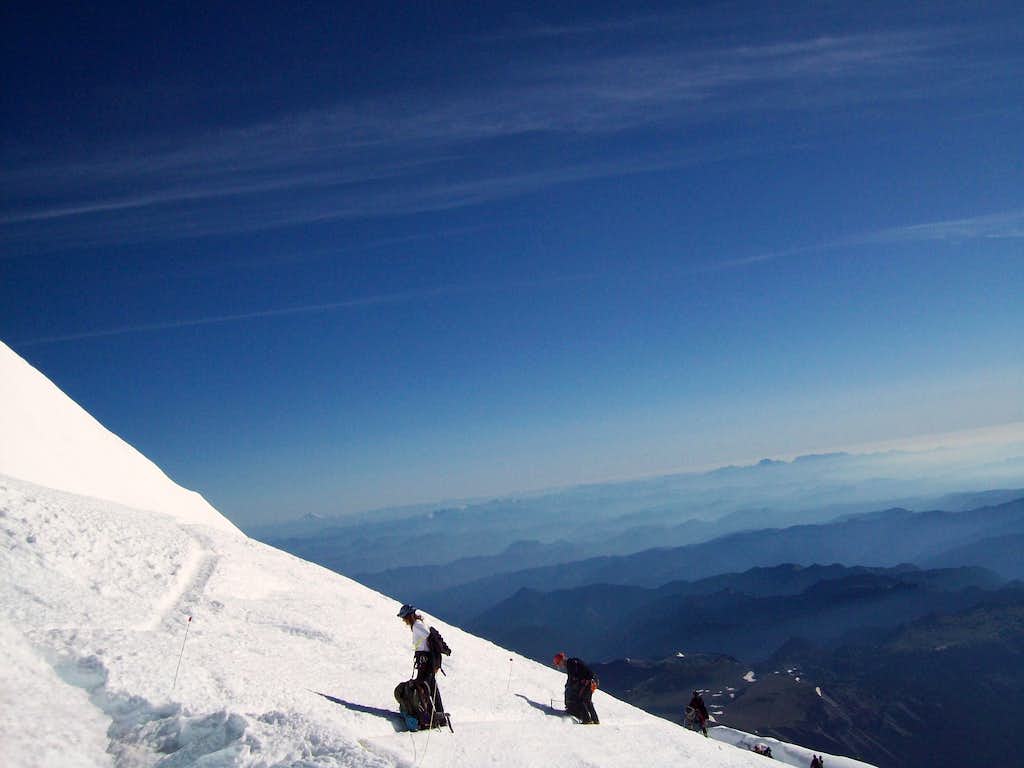 We headed down from the crater at a slow but steady clip. It was breathtaking looking at Little Tahoma and the eastern mountains though there was now a haze beginning to form from some sort of forest fire below. We made it down to the top of the clever at a good clip and the snow had only began to soften. The crevasse that had a board now had a ladder with two boards. It is apparent that the crevasses are really starting to open up now. I would hate to see this crevasse next month.

Then came the Cleaver. The snow was nice above but not here. This was the crux of the trip. I sweated from nerves more that effort here. The snow had clearly softened up and footing was poor which is not much fun when you realize one wrong slip and you are going places. Communication through this section was key and Anna our rope leader lead us through the Clever and the tougher footing safely. The scree and the scree/snow, loose rock mix was tough on the nerves but that is why climb with good people and Anna did a great job showing us through this section. Once off the cleaver it was back to camp. A couple more small crevasses were now opening up and we did see a serac fall safely off in the distance.

We packed up camp and then headed down. The haze from the forest fire was clearly beginning to block views. Hopefully in the next couple of day we get rain because it is going to be very hazy otherwise. Cathedral Gap and it's nasty scree was a little interesting but not nearly as bad as the Cleaver. Once through the gap and past the glacier crossing we were back at Camp Muir. During the Glacier crossing Mount Adams was looking like a beautiful gem, standing above the haze mystically. It was like it was greeting me and congratulating on topping it's big sister an reminding me about my great trip last year. Maybe I am still full of emotions but it was quiet a sight to see and a good reminder of that wonderful trip with my friend Jason. 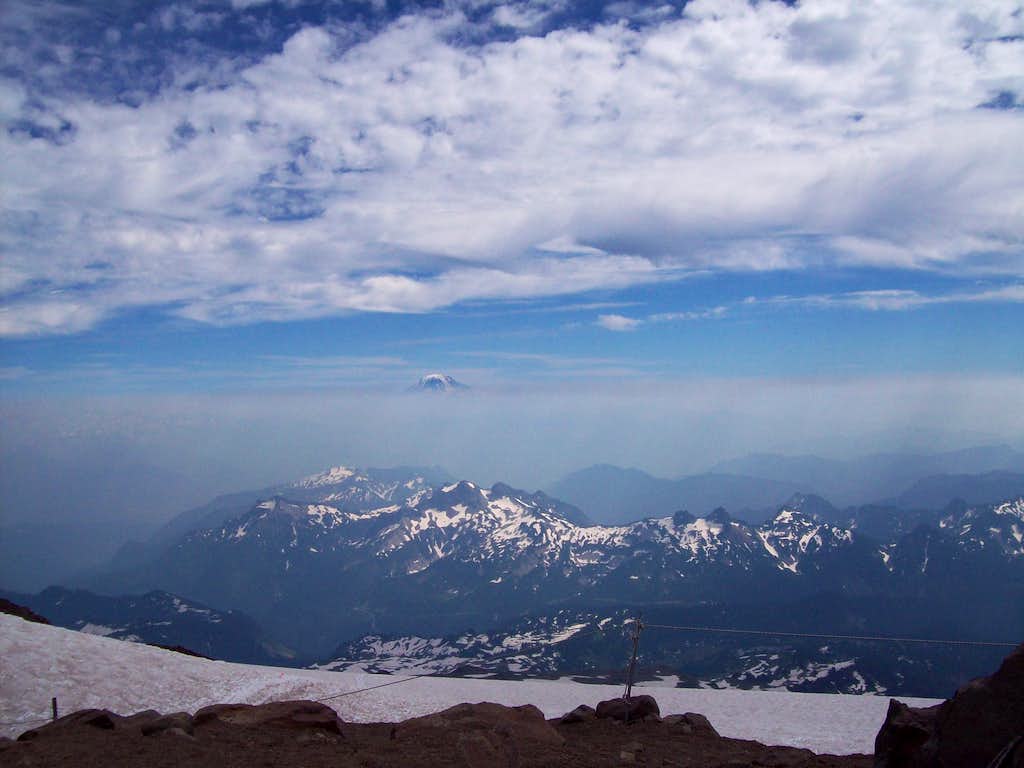 From Camp Muir. Notice the haze from the fires

We were greeted by a number of "sherpas" who greeted us with watermelons, potato chips and hugs. Then all of us made the long 4700 foot trek back to the bottom. On the way down I was able to snag 500 in a couple of glissades. But after that summit long trip I was beat and it took me about 3 hours to get down to Paradise. When we got down we signed out and headed to a good Mexican Restaurant in Eatonville.

It is hard to rate trips but this one ranks up there as one of best experiences of my life. Because of the weather, the views, the great support from group, the meeting of the groups, it clearly doesn't get any better. This is a trip I will remember for the rest of my life! 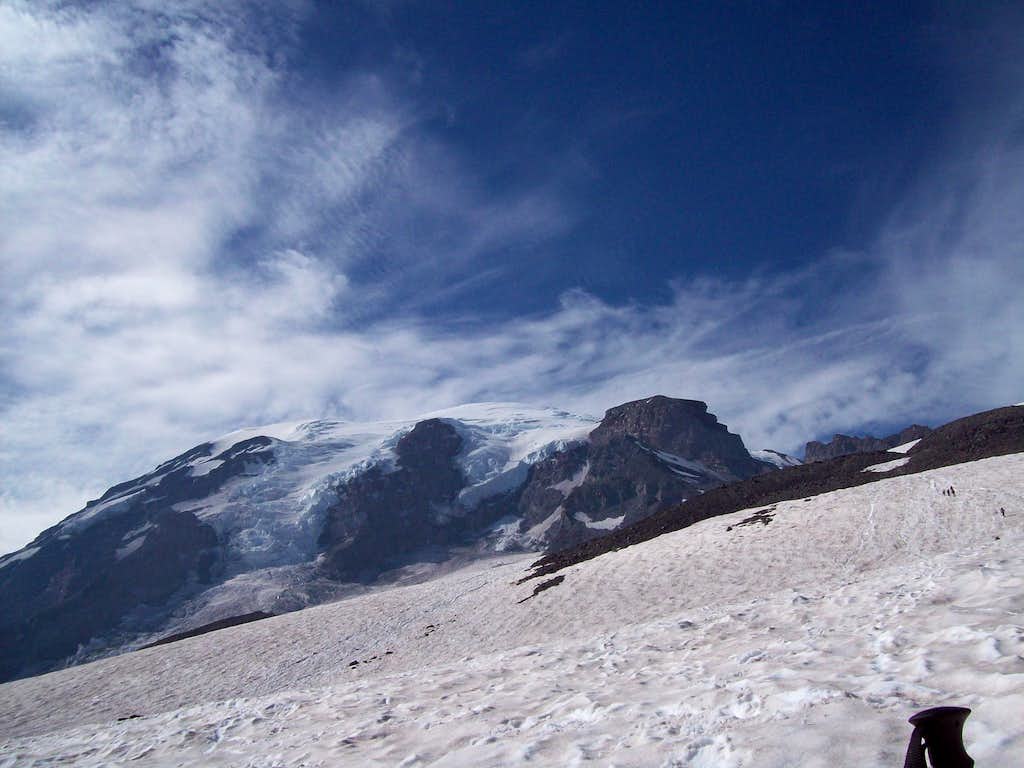 Last look at Rainier for the trip

I'm glad you made the summit of Mount Rainier. Although you were using sherpas to help out with gear and food, and you did not supply a traditional EastKing summit pose, your accomplishment is still well deserved after many months (and years) of training. You and your crew should be very happy, especially for having such great weather on such an unpredictable mountain.

It was a great trip with a great caring group of people. Honestly though I actually like that pose on Rainier. I was so caught up with emotion and I think the picture really reflects that. I thought it was interesting comparing my avatar pic I have now to my Adams avatar pic. The strange thing was on Adams I had a picture of Rainier in the background (to show where I was going to) and on Rainier I had a picture of Adams (where I came from). Both mountains I had the greatest of weather I give great thanks to that.

What a difference a week makes. My group was turned back by severe weather on the Emmons Glacier route on Monday July 13, 2009. Congrats to you.