I just want to write a couple of words about this page first.

I know it's not the best page and it doesn't contain enough information but that's only because there's very little information about this volcano on the Internet. It is a very remote and unexplored mountain. I'll keep looking for information and photos and hopefully I'll be able to improve this page. I just thought that this mountain deserves a page here, being the highest volcano in Antarctica.

Thanks for the understanding!

Mount Sidley is a massive, mainly snow-covered mountain which is the highest and most imposing of the five extinct volcanic mountains that comprise the Executive Committee Range of Marie Byrd Land. The feature is marked by a spectacular caldera on the southern side and stands NE of Mount Waesche in the southern part of the range.

Discovered by Rear Admiral Byrd on an airplane flight, November 18, 1934, and named by him for Mabelle E. Sidley, the daughter of William Horlick, manufacturer, who was a contributor to the Byrd Antarctic Expedition, 1933-35.

Mount Sidley was studied for the first time in 1988/89 by combined NZ, US, UK expedition.

The International Trans-Antarctic Expedition explored West Antarctica, including the area around Mt. Sidley. You can visit the website of the US portion of the expedition here:
http://www.stolaf.edu/other/cegsic/itase/index.html 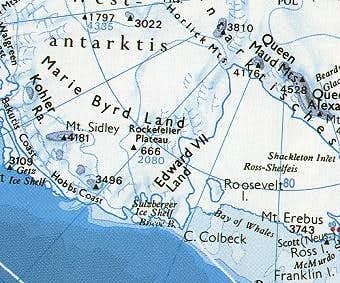 Marie Byrd Land is the portion of Antarctica lying east of the Ross Ice Shelf and the Ross Sea and south of the Pacific Ocean, extending eastward approximately to a line between the head of the Ross Ice Shelf and Eights Coast. The inclusion of the area between the Rockefeller Plateau and Eights Coast is based upon the leading role of Rear Admiral Richard E. Byrd in the exploration of this area. The name was originally applied by Admiral Byrd in 1929, in honor of his wife, to the northwestern part of the area, the part that was explored in that year. Due to its relative inhospitableness, even by Antarctic standards, most of Marie Byrd Land has not been claimed by any sovereign nation, making it by far the largest single unclaimed territory on Earth.

Reaching Mount Sidley would be, without any doubt, a very ambitious task. It would require a full-scale Antarctic expedition.

The Environmental Protocol of the Antarctic Treaty became law in 1998 after legislation in each of the member countries. One of the ways in which this protects Antarctica is by only allowing visitors to Antarctica by member nations as long as they are given a permit to do so. The granting of a permit is dependent on the visitors agreeing to adhere to certain rules and guidelines. Each nations rules are not the same in the detail, though they are similar in the general principles.

Antarctica is a continent surrounding the Earth's South Pole. It is the coldest place on Earth and is almost entirely covered by ice; however, it is also the world's largest desert.

Although myths and speculation about a Terra Australis ("Southern Land") go back to antiquity, the first commonly accepted sighting of the continent occurred in 1820 and the first verified landing in 1821 by the Russian expedition of Mikhail Lazarev and Fabian Gottlieb von Bellingshausen.

With an area of 13,200,000 km², Antarctica is the fifth largest continent, after Asia, Africa, North America, and South America. However, it is by far the smallest in population: indeed, it has no permanent population at all. It is also the continent with the highest average altitude, and the lowest average humidity of any continent on Earth, as well as the lowest average temperature.