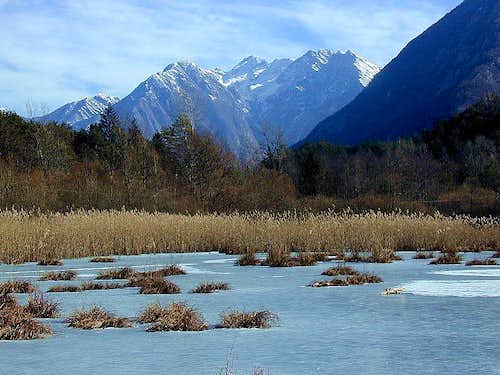 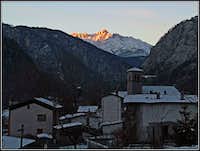 Morning winter view from the N 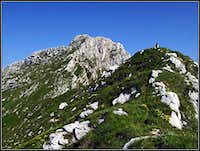 Initial remark: As many of toponimes have also original Slovenian names (besides Italian and Furlani), it's worth mentioning that in Slovenian language č, š and ž are pronounced like ch, sh, and zh.

Although Monte Plauris / Lopič does not exceed 2000 meters of altitude, it is a great mountain. Fella / Bela river, at its northern foothills, flows on the altitude of only 300 meters and Tagliamento / Tilment river on the south-west, is already on the altitude of 240 meters. And those 1700 meters of a steep, rugged slope makes a powerful impression on a traveller, driving up or down the valley. Monte Plauris / Lopič is also the highest summit of Julian Pre-Alps, a broad and wild area on the very west of Julian Alps. It is the last high summit on the west in the long range, which on the eastern starts with the wild chain of Monte Musi / Muzci.

Monte Plauris / Lopič is primarilly a hikers goal. There are many steep walls around, but except perhaps a few crags they are in a climbing sense not developed. The whole area is very remote and rarely visited, the only exception being the main summit. While in the northern part of the mountain a hiker and explorer can find many hidden corners of wilderness, the southern part hosts a few remote alpine meadows. Above Val Venzonassa mountain biking can be very rewarding and also paragliders might find their starting points there.

The main range of Monte Musi / Muzci - Monte Plauris / Lopič runs in the east-west direction. Up on Monte Plauris / Lopič the crest comes in a SE-NW direction, forming a sharp border between grassy southern slopes and rocky northern slopes. Let's consider the SE border to be on Forca Slips, 1631 m. Towards the east of it a few less important summits rise in the main ridge: Jôf di Ungarina, 1806 m, Jôf di Confin, 1761 m, and finally the more important Monte Lavara / Golz / Javor, 1906 m. Towards the NW from Forca Slips first the point 1848 m rises sharply, then the high ridge continues just to the summit of Monte Plauris / Lopič. By it the SE approach comes. 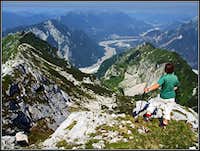 Val Lavaruzza from the top

Towards the SW, Monte Plauris / Lopič sends a long side ridge just down to Tagliamento / Tilment river. A higher summit in it is Cima di Cervada, 1781 m. A similar ridge continues from the summit of Monte Plauris / Lopič towards the west. First it goes a bit towards the north, reaches the wild Pale di Misdi, 1841 m, where it branches. The western branch goes again all the way down to the valley, to the town of Carnia. Between the western and the south-western ridge the beutiful Val Lavaruzza lies. Its cirque was formed by a glacier, so on Cjariguart one can still see remains of a moraine. Huge natural forces also created twisted layers of rocks, which can be seen on the slopes. 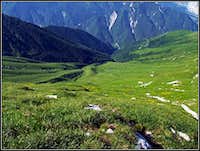 South of the summit of Monte Plauris / Lopič a broad, grassy cauldron stretches. It can be seen from far away, as for example from Monte Chiampon, across Val Venzonassa. Many small grassy ribs ("cuéstis") and incised surfaces ("livinai"), are descending from the surrounding ridges, waters, flowing down, finally join in the Gran Rio creek. In early summer these slopes are full of blossoming flowers, so no wonder why the path crosses the whole slope. This is Traversata Prealpi Giulie, in this part being recommended as a special course for flora lovers. The entirely horizontal path connects Ungarina pasture and Bivacco Coi. 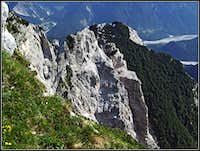 The N side of mountain

Finally, the northern and the north-eastern slopes of Monte Plauris / Lopič are a remote, very rugged, rocky area, where almost nobody goes. In the upper part steep walls are falling a few hundred meters down, everywhere fresh landslides can be seen, below the walls scree fields are stretching down into the woods. In the upper part no path goes there, that's perhaps a domain only of a few hunters who might know some places.

The outposted position ensures Monte Plauris / Lopič a broad panorama. While just towards the south, on the other side of the forrested Val Venzonassa, it is obscured by the lower Monte Chiampon, along the Tagliamento / Tilment river your view can fly all the way towards the Po river plane. Towards the west, the Carnic Pre-Alps are stretching. The most interesting part is of course the northern and eastern panorama. There almost all of the highest summits of Carnic and Julian Alps can be recognised. The most beautifully are seen the following: Monte Sernio and Creta Grauzaria, Zuc dal Boor, Jôf di Montasio / Montaž, Monte Canin / Kanin and the nearby Monte Musi / Muzci. 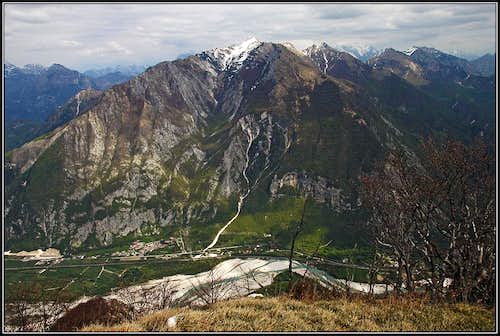 Monte Plauris/Lopič from the W, from Monte San Simeone

Through the main valley of Tagliamento / Tilment the A23 highway Udine - Tarvisio runs.

1. For the NW approach exit the highway near Gemona and drive to Carnia town. North of it, by Rio Tugliezzo, take a mountain road, which brings you up to Stavoli Tugliezzo, 503 m. There you must leave your car, because even if mountain roads continue southwards up the hill, they are closed for public traffic.

2. For the SW approach, you must start the ascent just in the main valley, south of Portis, 242 m.

3. For the SE approach exit the highway near Gemona and drive to Venzone / Venčon town. Don't forget to have a walk through it! On the northern part you enter the Val Venzonassa. By a narrow mountain road you drive into the valley till the altitude of some 475 m, where before the first tunnel there's a parking place. If you want to ascend by the church of San Antonio Abate, you can park on the curve before (some 40 meters higher). At the tunnel the sign stands that the road further into Val Venzonassa is closed for public traffic. But when the agriturismo on Casera Confin is opened, below the sign you will find an inscription (in Italian only), allowing you to drive up on that alpine meadow. The road continues above the Venzonassa valley, above Borgo Prabunello you find a crossroads (towards the east you'd continue on Forca Tacia, 1053 m), where you deter left. In many turns the road brings you on the slopes of Jôf di Ungarina, where you take the right branch on Casera Confin, 1331 m (the left branch brings you on Casera Ungarina).

4. For the NE approach you drive through the valley of Fella / Bela till the small village of Resiutta. There the road deters into Val Resia / Rezija, but you drive only some 500 meters. There you deter right again (southwards) into Borgo Povici. I don't know where is best to park there, but the road into the valley of Resàrtico is certainly soon too devastated.

1. From the NW. From Stavoli Tugliezzo, 503 m, in the SE direction along the valley of Lavarie creek (path No. 701). At the end a bit steeper on Passo Maleet, 1625 m. You cross the saddle and reach the crossroads. The right branch goes down to Rif. Bellina, while our path continues in the same direction across the slopes. So we approach the summit rocks of Monte Plauris / Lopič, which we must detour by the western side. After crossing, we ascend through a narrow and unpleasant ravine, where we need to be more careful when scrambling up. After reaching the SW ridge, the path goes by a broad ledge on the southern side and then soon left on top. 4 h 15 min.

2. From the SW. From Portis, 242 m, we hike up by the marked path No. 728a. It brings us first in the SE direction to bivouac Coi, 1308 m, where we turn north, and across the slopes of the SW ridge reach the upper part of Val Lavaruzza. By Casera Cjariguart (Rif. Dino Bellina), 1400 m, we continue in the NE direction towards Passo Maleet, where we hit the route #1. As described above on top. Must be some 5 h 30 min!

3. From the NE. From Borgo Povici in the mouth of Val Resia / Rezija, we continue southwards by the valley of Resàrtico creek. Where the valley closes, the marked path No. 702 turns right, reaches bivouac Resàrtico, and continues first in the western and then in the south-western direction up the valley. Broad, moderately steep slopes bring you on Forca Slips, 1631 m, where you hit the SE approach. As described in #4 on top. Must be again more than 5 h!

4. From the SE. We start the tour either on Casera Confin, 1331 m, or on Casera Ungarina, 1296 m. From Agriturismo on Malga Confin, 1331 m, we take the path on the ridge, which descends from Jôf di Ungarina down to Malga Ungarina, continue by it northwards and then left over the slopes on Forca Slips. From there, around the sharp peak 1848 m, again on the main ridge and towards the NW on top. From Malga Confin 2 h 15 min, from the parking place in the valley 4 h 45 min. 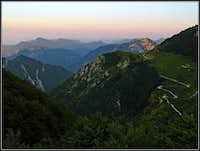 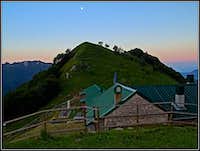 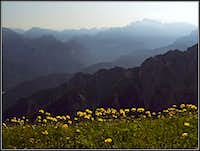 Monte Plauris / Lopič can best be ascended in dry seasons. In Julian Alps that would mean from end of May till end of October. There are two seasons when the ascent can be most rewarding: early summer (June), when the meadows are in full blossom, and in October, when days are clear and larches golden.

The mountain is within Julian Prealps Nature Parc, which was established in 1996. Its headquarters are in Prati do Resia. For more details see the its official web page at: http://www.parcoprealpigiulie.org/.